Obray Ramsey Sings Folksongs From The Gateways To The Great Smokies 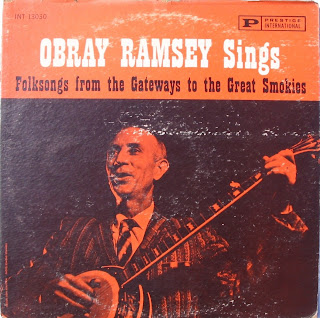 Here`s an LP you`re going to like if you are a fan of REAL old-time banjo picking and singing. Nothing fancy out of Mr. Ramsey here, just good, solid, straight forward old-time singing with banjo. Most of these songs are sure enough traditional songs, some even going back to the traditional English ballad type songs.
I don`t know much to tell about Obray Ramsey, so I`m just going to type the one paragraph about him on the back of the LP cover-----
"Obray Ramsey is an excellent example of these processes (referring to the history of the "handing down" of this type of music). Ramsey was born on the banks of the Three Laurels to a western North Carolina family rich in Appalachian tradition. From his mother and grandmother he inherited his basic store of Anglo-Irish-American song. His repertoire includes not only the old ballads and lyrics, native and imported, but later forms and songs distributed by Jimmie Rodgers, The Carter Family, and other early hillbilly entertainers. He learned the guitar as a young man, but usually performed without accompaniment. The folksinger-collector-impresario Bascom Lamar Lunsford "discovered" Ramsey, encouraged him to become an excellent banjo picker, and featured his performances on the Asheville Folk Festival. Ramsey`s performances show varied influences, and he has extended his repertoire by festival contacts. He seems to have completely absorbed all he has learned of old and new styles, and his performances are excellent examples of a good portion of Appalachian song today. His singing often echoes the oldest of mountain styles; he plays "clawhammer" banjo without the flamboyance of the "bluegrass" performer; he is the composer of a number of gospel songs. Performers like Ramsey are of great importance in presenting folksong tradition to the "outsider" and preserving it for their own people."
So there you have it---hope you enjoy!!