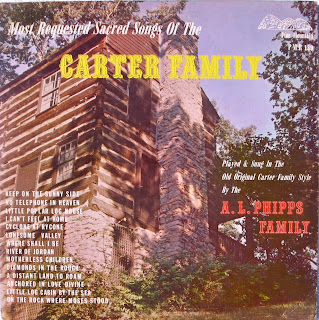 Hello folks, it`s Sunday so I`ve posted a gospel album called Most Requested Sacred Songs Of The Carter Family - Played & Sung In The Old Original Carter Family Style By The A.L. Phipps Family. That`s a mighty long title for an LP, but it is a pretty good LP!! I don`t really understand the "Sacred" part of the title though. Not all the songs on the album are sacred songs. We have a few songs of home, a tear jerker or two and a disaster song.
The Phipps family were from south east Kentucky, around the Barbourville area. Basically, the Phipps Family pretty much identically copy the Carter Family. Usually, a group that copies another great group never captures the "feel" of the group being copied, that is not the case with the Phipps Family. It`s uncanny how close the Phipps Family sounds like The Carter Family. Their singing is so much like the Carter`s it`s almost hard to tell them apart. A.P. Carter was well known not to sing in a regular fashion (he might sing his bass line on the first 2 lines of the first chorus, the last line of the 2nd chorus, or just whenever the mood stuck him I guess) and A.L. Phipps has the "mood" of A.P.`s singing down pretty dang good. Even the Phipps Family instrument styles pretty much totally reproduce the Carter Family`s instrumental styles.
Now I`m going to say something that might be considered blasphemy to country music fans, I`d rather hear the Phipps Family do Carter Family music than the Carter Family themselves. I can`t explain why, it`s just that way. Apparently A.P. Carter loved them too, as he played dates with them and even recorded a record or two with them.
I hope you enjoy this gospel record. What could be more pure than Carter Family gospel done by the Phipps Family??!!

Click here to download Most Requested Sacred Songs Of The Carter Family by the A.L. Phipps Family