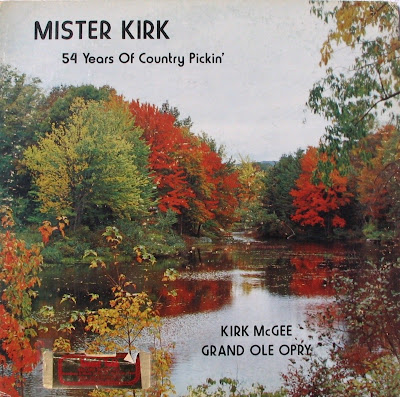 Sorry to be slow about posting lately. Here`s a good `un! The last recordings made by Kirk McGee as far as I know. Kirk May have been 81 years old but he was still in fine form.
Some of the songs on this were written by Kirk, as noted in the track list from the cover. Also, his daughter Ona wrote a song included here too.
Most of the songs feature Kirk on finger picked guitar. He wasn`t as proficient as his brother Sam on guitar, but was still a pretty fine picker.
One of the songs feature Kirk`s great banjo stylings on a song Uncle Dave Macon was well known to play, Bound To Go. Too bad there is only one banjo tune here, Kirk was a great 5 string picker, my favorite.
Likely the best known song on this LP was one Kirk wrote, Blue Night, which was recorded by Bill Monroe. I`ve never heard the Bill Monroe recording though.
There a a couple really dark songs here that Kirk and his daughter wrote, Dark Clouds and The End Of Forever. Dark Clouds is an especially odd song to me. Not a good one to listen to if you already have the blues! Kirk`s guitar is great on this song though.
One more little note, the LP cover has Sinner`s Prayer listed 2 times on side one as track 7 & 8. Of course the tune isn`t on here twice, it`s just a typo. The LP only has 15 tunes on it, not 16.
Listen and enjoy!! 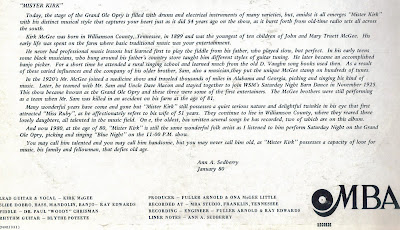