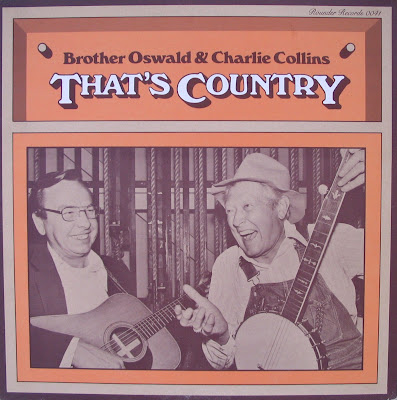 Here`s the Oswald LP I mentioned in the other post. What a great name for a country record! Charlie Collins is featured on some of the songs as lead performer.
One little note----the song list on the back of the LP cover is not in the right order of the songs on the actual disc, although all the songs in the list is on the LP.
I hope you can read the back of the album cover, dark brown print on light brown background is hard to see sort of. As always, just click any picture to enlarge it.
Hope you enjoy! 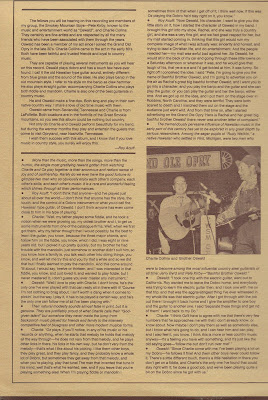 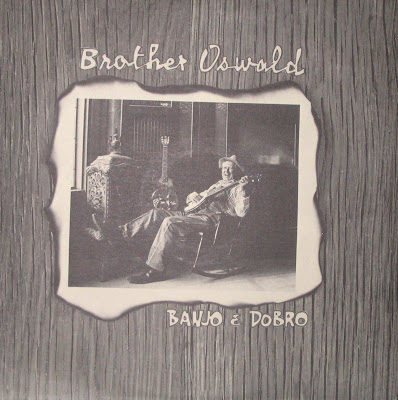 Here is another LP by one of my favorites, Bashful Brother Oswald. I believe this is a quite rare reord, I didn`t even know this existed till I found it on ebay one day. There`s some great music here. Most of these tunes are not songs Oswald routinely performed.
The Tennessee Records label was a label that dobro picker Tut Taylor had in the 1970`s. I have no idea how many records Tut released on this label.
One interesting thing on this album is the first song is sort of an advertisement. Oswald mentions he`s going to pick banjo the way the Tennessee mountain banjo style. Tut Taylor also owned and ran Tennessee musical instrument building company and had a model of open back 5 string banjo that was supposedly the "Oswald" model. I have got to actually play one (likely wasn`t many made) and it was a good `un. There was also a Grandpa Jones model planned. I don`t know if either model was ever put into production. There was also an "Oswald" model dobro, but I`m sure there was very few if any built.
We have the usual crew here for an Oswald record---fellow Smoky Mountain Boy Charlie Collins, Norman Blake, Tut Taylor and someone named Dave Daughtery, which I know nothing about.
I`m sure th instruments in the LP cover picture are "Oswald" models, too bad they can`t be seen well. On another Oswald LP called That`s Country I`m 100% sure the banjo in the picture on the album cover is an "Oswald" model. The one that I played had identical inlays on the finger board. Now I`ll have to post that record so you can see the banjo.
Happy listening!! 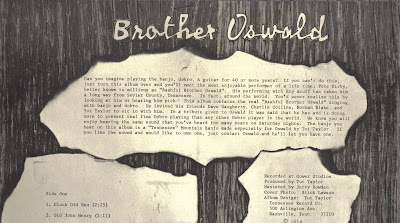