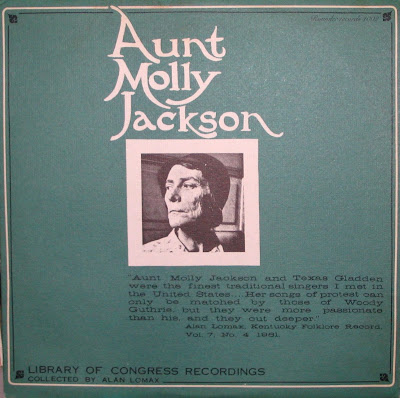 Here is an LP I couldn`t decide if I wanted to post or not. I really don`t care for this type of thing, but I know some of you folks who check out my blog will like it.
The only information I know about Aunt Molly Jackson is what`s on the LP cover and in the little booklet inside, which I have included in the post. 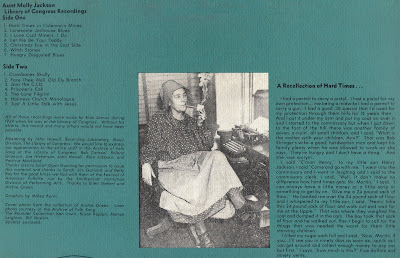 Here is scans of the booklet--- 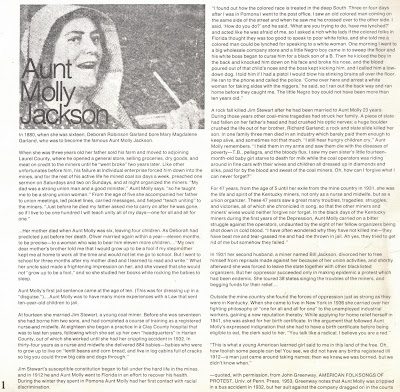 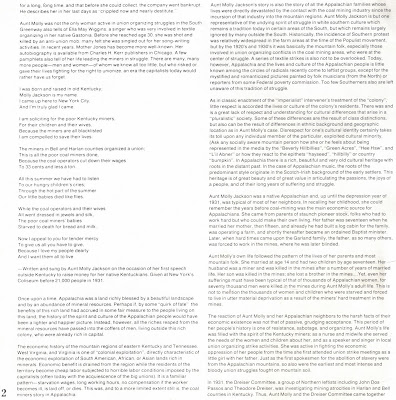 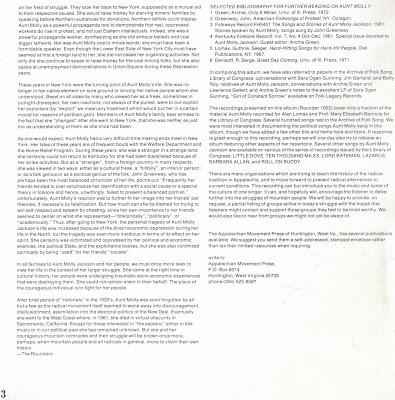 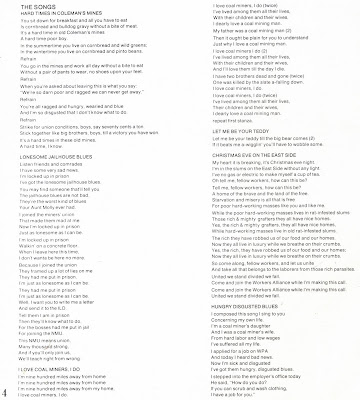 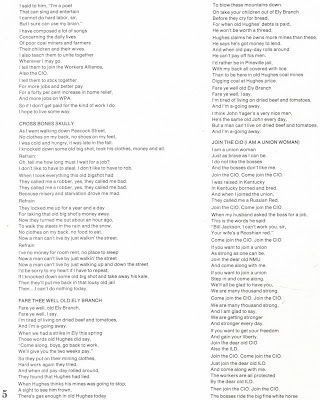 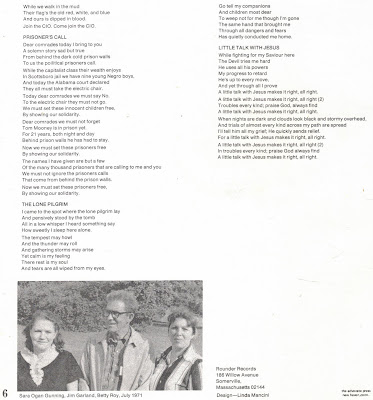 Ok folks, here`s the next installment of this series. Sorry to be slow posting this, my computer has been in the shop and I`ve had to re-load much of my music on it.
One comment on the last J.E. Mainer post mentioned that his style is sort of the bridge between old time and bluegrass music, which is exactly right.
Some of these records are not in the best of condition, so---there may be some skips here and there, so I hope you still enjoy them. 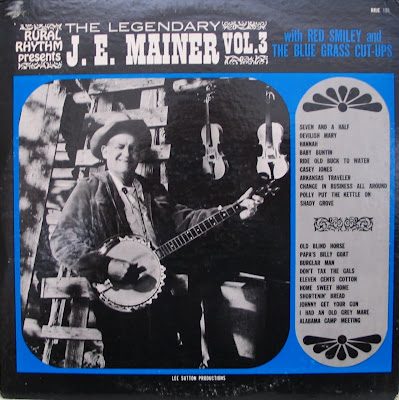 Track list for volume 3---
1. Seven And A Half (seems to have been a Mainer tune)
2. Devilish Mary (likely the source for this was the Skillet Lickers)
3. Hannah (likely inspired by the Chris Bouchillon or the McGee Brothers 78)
4. Baby Buntin` (source unknown to me)
5. Ride Old Buck To water (an old Skillet Lickers tune)
6. Casey Jones (this was a VERY popular song when J.E. would have been young, recorded by many country and early pop artists)
7. Arkansas Traveler (would have been a very common tune, originally from the minstrel show stage)
8. Change In Business All Around (not sure of where this may have came from)
9. Polly Put The Kettle On (sometimes it`s Molly, likely from the Skillet Lickers version)
10. Shady Grove (the common old tune, done here in a major key, often played in a minor key, with the Jew`s harp)
11. Old Blind Horse (no idea where this comes from, possibly Chris Bouchillon)
12. Papa`s Billy Goat (likely from the Fiddlin` John Carson 78)
13. Burglar Man (likely from the Uncle Dave Macon 78)
14. Don`t Tax The Girls (likely from the Blind Alfred Reed 78)
15. Eleven Cents Cotton (likely from hearing Uncle Dave Macon on the Grand Ole Opry)
16. Home Sweet Home (commonly played as an instrumental in the county areas)
17. Shortenin` Bread (likely from the Skillet Lickers)
18. Johnny Get Your Gun (likely from the Earl Johnson 78)
19. I Had An Old Grey Mare (don`t know where this came from)
20. Alabama Camp Meeting (the actual tune seems related to an old song Uncle Dave Macon used to do on the Opry sometimes called Pray For The Lights To Go Out, the talking parts may come from an old "coon" comedy 78 I have heard somewhere) 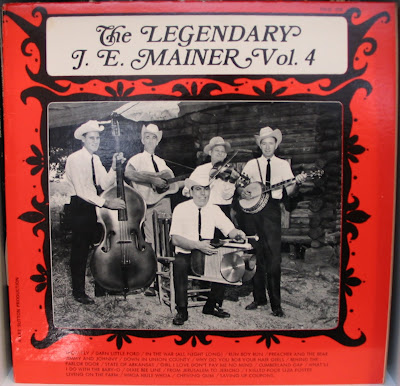 Volume 4 track list---
1. Shoo Fly (a common old fiddle tune)
2. Darn Little Ford (possibly inspired by the old Oscar Ford records about Ford cars)
3. In The War (All Night Long) (likely inspired by another war type comedy song about the Spanish-American war)
4. Run Boy Run (likely from the Skillet Lickers as the tune Run, Nigger, Run , Also called Run Johnny Run)
5. Preacher And The Bear ( likely from Riley Puckett, this was a hugely popular song recorded around 1905 by either Arthur Collins or Byron Harlan, who were very big recording stars in the early days of the recording industry)
6. Jimmy And Johnny (no idea where this tune comes from)
7. Down In Union County (Roy Acuff often performed this in the late 30`s, Acuff was from Union County, Tennessee which is north east of Knoxville)
8. Why Do You Bob Your Hair Girls (from the Blind Alfred Reed 78)
9. Behind The Parlor Door (J.E. claims to have wrote this, but the Pickard Family had a tune similar to this, maybe J.E.`s inspiration for the tune, sort of a different interpitation of the Pickard`s tune)
10. State Of Arkansas (sort of a version of Uncle Dave Macon`s Misery In Arkansaw tune)
11. Girl I Love Don`t Pay Me No Mind (written and recorded by Fiddlin` Arthur Smith in the 30`s)
12. Cumberland Gap (the common old fiddle tune)
13. What`ll I Do With The Baby-O (Mainer`s record from the 30`s may have been the first)
14. Dixie Bee Line (this is, of course, the old Uncle Dave Macon tune)
15. From Jerusalem To Jericho (also known as an Uncle Dave Macon number)
16. I Killed Poor Liza Foster (likely inspired by the Grayson & Whitter 78 of Tom Dooley)
17. Living On The Farm (I have no idea where this comes from)
18. Whoa Mule Whoa (the common old fiddlin and banjo tune)
19. Chewing Gum (from the Carter Family version, not the Uncle Dave Macon tune)
20. Saving Up Coupons (sort of a popular tune during the depression, but I don`t know where it came from)

Here is a sort of a series I`m going to start. J.E. Mainer had at least 20 LP`s released on the Rural Rhythm label, as I have up to Vol. 20 (I`m missing Vol.17). There really isn`t a lot to say about J.E. as there is plenty of information about him on the web.
One thing I will say is that when he was learning to play that he must have listened to many 78`s, as his material covers many classic performances. I will give a few examples as we go through the collection.
The first two releases posted here didn`t have a volume number, but I call them Vol.1&2 due to the catalog numbers. I guess these two released sold enough to warrant more records being made. A few of the tunes in this series has been released on cd, but certainly not as a set of any kind.
I have not included scans of the backs of these LP`s as there is only lists of other Rural Rhythm releases in type so small you couldn`t read the scans anyhow. A few of the discs in this series do have information on them, and those that do will be scanned onto the blog page. 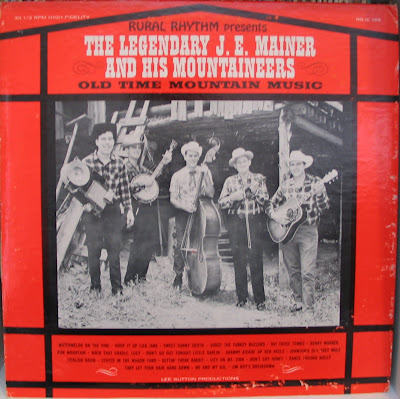 Track list for "Vol.1"---
1. Watermelon On The Vine ( a Skillet Licker & Uncle Dave Macon tune)
2. Hoop It Up Liza Jane (a Bradley Kincaid tune)
3. Sweet Sunny South (a Charlie Poole tune)
4. Shoot The Turkey Buzzard (an east Tennessee tune associated especially with Roy Acuff`s fiddling)
5. Oh! Those Tombs (another Roy Acuff tune)
6. Kenny Wagner (a Vernon Dalhart song)
7. Run Mountain (this tune seems to be unique to the Mainer`s)
8. Rock The Cradle, Lucy (a Skillet Licker song)
9. Don`t Go Out Tonight Little Darlin` (I think a Grayson & Whitter song)
10. Granny Kickin` Up Her Heels (I never heard this one anywhere else)
11. Johnson`s Old Grey Mule (Gid Tanner & Earl Johnson both had good versions of this in the 20`s)
12. Ticklish David (an old tune written & recorded by Cal Stewart aka Uncle Josh, also Uncle Dave Macon did this one)
13. Stayed In The Wagon Yard (a Lowe Stokes tune, also Grandpa Jones did it)
14. Gettin` There Rabbit (Samantha Bumgarner tune)
15. City On Mt. Zion (don`t know where this came from, likely a shape note song book)
16. Don`t Cry Honey (Riley Puckett sang this one with the Skillet Lickers)
17. Dance Around Molly (just a fiddle tune, recorded by Tommy Magness in the late 40`s for one)
18. Taby Let Your Hair Hang Down (unknown to me)
19. Me And My Gal (another mystery to me)
20. Jim Boy`s Breakdown (don`t know this one either) 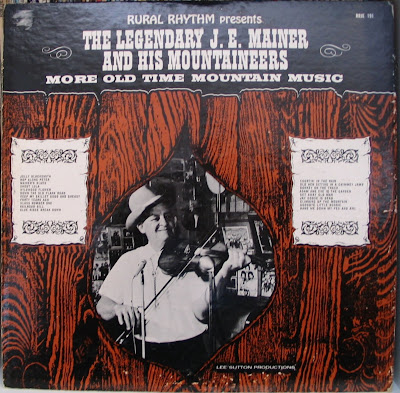 Track list---
1. Jolly Blacksmith (a Theron Hale tune for one)
2. Hop Along Peter (a 20`s recording that I can`t remember the artist of right now)
3. Mainer`s Blues
4. Shout Lula (a common tune)
5. Wildwood Flower (of course we know this is a Carter Family tune!)
6. Down The Old Plank Road (an Uncle Dave Macon song)
7. Keep My Skillet Good And Greasy (another Uncle Dave tune)
8. Forty Years Ago (likely started as an old parlor tune)
9. Glass Number One (no idea about this one)
10. Railroad Bill (Riley Puckett recorded this one)
11. Blue Ridge Break Down (no idea about this one either)
12. Courtin` In The Rain (a Dock Walsh song)
13. Old Hen Sitting In A Chimney Jamb (a Skillet Lickers tune)
14. Donkey On The Track (likely from the Al Hopkins record)
15. Adam And Eve In The Garden (no idea here)
16. Get Away Old Man (a Vernon Dalhart number)
17. Jay Goose Is Dead (??? no idea)
18. Climbing Up The Mountain (don`t know this one)
19. Goodbye Little Bonnie (a popular song in the 30`s titled Bonnie Blue Eyes usually)
20. Hand Me Down My Peg And Awl (a Kelly Harrell tune) 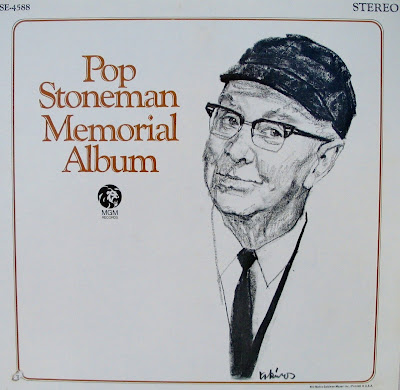 Here is one of my favorite Pop Stoneman LP`s! It`s all solo, just his voice and the autoharp.
I`m not going to go into any biographic information as there was a biography in the LP that I have copied to the posting.
ENJOY!! 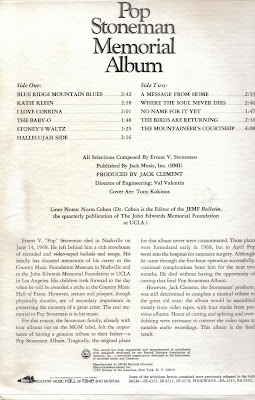 Here is the biography from the LP. Just click on any picture to enlarge it. 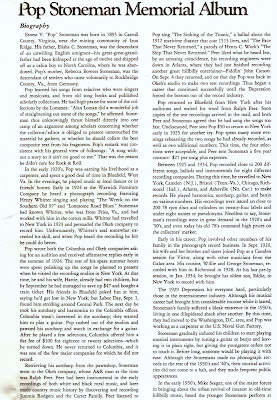 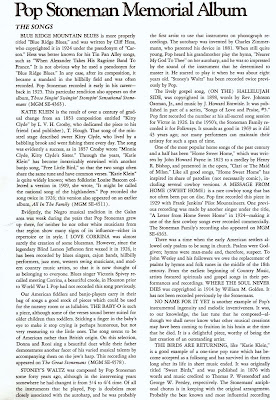