I just recently added two other blogs to my list.
www.westernswing78.blogspot.com      This has, as you could see by the name, early western swing.
The other is...      www.tamtammelodie.blogspot.com         This is a little different from what you might expect me to like. I`d say at least half of the posts are Hawaiian music, which is what I like about it.
Check them out!
Posted by Allen`s Archive at 8:53 AM No comments: 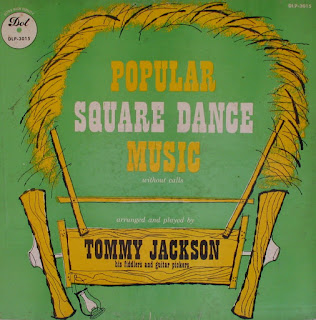 Here is some mighty fine fiddlin`! Tommy Jackson perhaps had the most popular fiddling records at the time this was released, although fiddle instrumental records were falling out of fashion at the time and has never been mainstream since. When was the last time a fiddle instrumental made the charts?!
There were some great fiddlers recording at the time this was recorded, such as Howdy Forrester, Benny Martin, etc. This was the latest country country fiddling styles at the time. Not old-time, bluegrass or western swing in style, but a new-ish niche in country fiddling that could be describes as sort of a jazz or blues influence due to inprovisition, but still not as modern as such fiddlers as Vassar Clements or Johnny Gimble.
I wonder what ever happened to Tommy Jackson. I have never heard of him since he was a star fiddler in the 1950`s and early 1960`s. Give this a listen and enjoy! 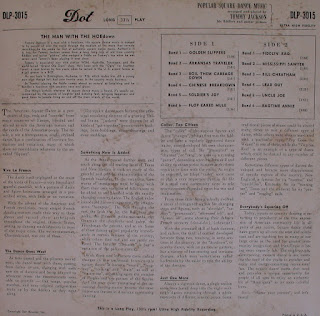 OK folks, I changed file services for the latest two Roy Acuff posts. I fixed the download links to the new service, so all you need to do is click the links in the post as usual to download. Let me know how it works for you---Allen
Posted by Allen`s Archive at 4:04 PM 2 comments:

Seems as soon as I posted the two new Acuff LP`s, Media Fire, the file host I use, has blocked them. Give me a little time as I look into some options----Allen
Posted by Allen`s Archive at 11:36 AM 2 comments: 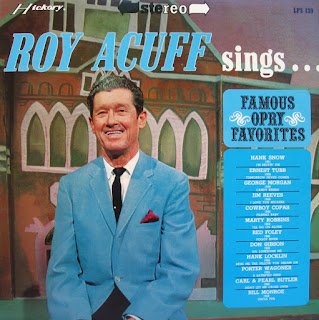 Here is a good LP with Roy singing some of the favorite songs performed on the Grand Ole Opry. 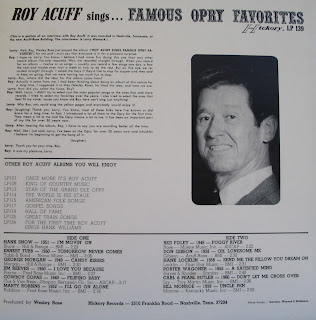 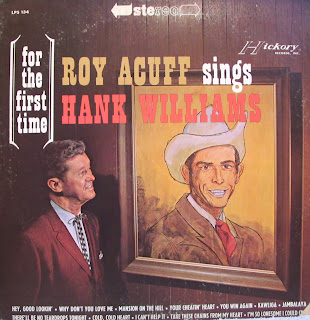 Here is a good one for Hank Williams Fans. I think Roy and the boys were outstanding on Hank Williams type songs. As far as the instrumentation is concerned, Hank`s Drifting Cowboys were sort of a modern version of The Smoky Mountain Boys at the time. The Drifting Cowboys featured fiddle and electric steel where The Smoky Mountain Boys mostly featured fiddle and Dobro. Also, one of Hanks favorite singers was Roy Acuff, and it`s very easy to hear the Acuff influence in Hanks vocals.
Anyhow... here`s a fine LP for you! 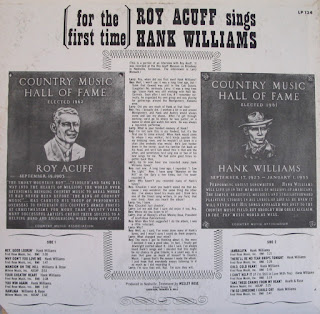 The Phipps Family - Echoes Of The Carter Family 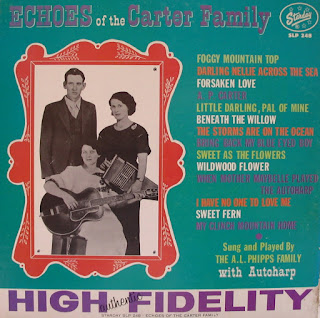 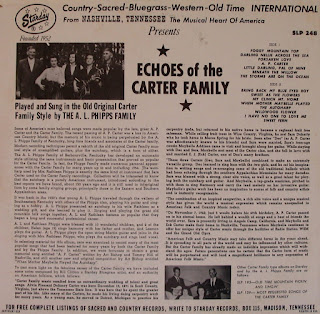 Roy Acuff - The World Is His Stage 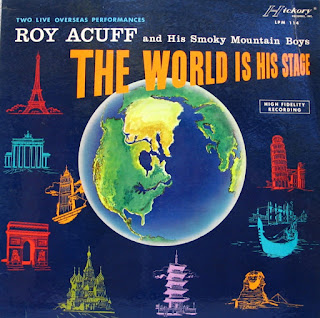 Here is an LP of live show material. The sound quality on some of the cuts is not the best, but it`s still plenty listenable. The sound is just bad from the shows, not because my LP is in bad condition.
I forgot to mention, there is another LP I have already posted (a various artist LP) that has two Acuff Hickory cuts on it that I don`t believe were ever released on any other Acuff records. Just search "15 Country Greats" in the search box at the top left hand side of the blog page if you want to download it. 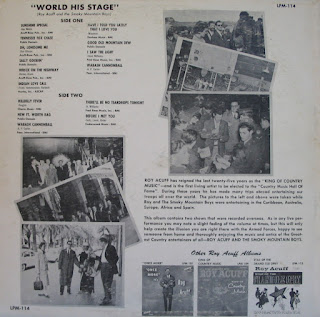 Click here to download Roy Acuff - The World Is His Stage
Posted by Allen`s Archive at 10:27 AM 5 comments: 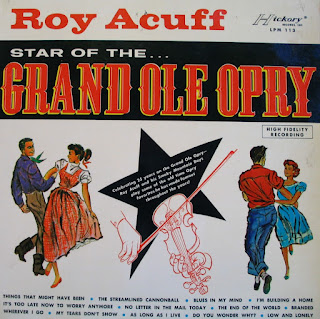 We will start the series with this fine LP. Enjoy! 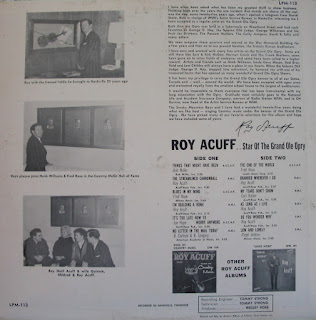 Posted by Allen`s Archive at 10:18 AM No comments:

Well folks, I have picked what I`m going to post for my next "series". What we are going to be looking at is Roy Acuff`s Hickory recordings. Very few of Acuff`s Hickory and later recordings have been re-issued.
As you may know, on my blog, I try really hard not to post anything that has been released on cd. There are four Acuff LP`s from Hickory that have been released on two cd`s on the Ace label, so, I will not be posting these four LP`s (although I do have these four LP`s). If you are interested in Roy Acuff and want to get these two cd`s, the titles and catalog numbers are---
Once More It`s Roy Acuff/King Of Country Music, on Ace CDCHD 988
Hand Clapping Gospel Songs/Sings American Folk Songs, on Ace CDCHD 999
So, just for fun, I have posted pictures of one of the LP covers that have been re-issued on cd because it`s sort of an interesting cover. It does have Roy on it on the stage of the Ryman Auditorium, but does not feature Roy and his own outfit, The Smoky Mountain Boys. Instead, as you can see, it shows Roy in the middle of taking a step in front of one of the oldest acts on the Grand Ole Opry, The Fruit Jar Drinkers. There are some pretty famous Opry old-timers here! To Roy`s right with the red shirt on picking guitar is Uncle Dave Macon`s son Doris, then Tommy Leffew on banjo and Hubert Gregory on guitar to the extreme right. Under the O in the word OLE on the guitar on the backdrop is Herman Crook, leader of the famous Crook Brothers String Band. In front of Roy is Jackie Phelps on electric guitar. The bass picker behind Jackie is likely Stewart Golden. I have no idea who the square dancers are.
Hope you enjoy this cover! 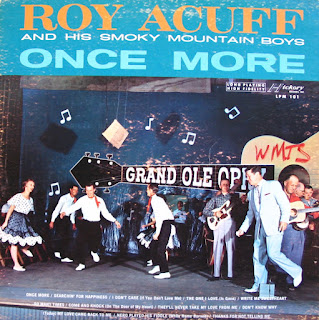 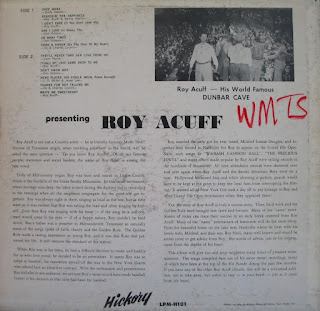