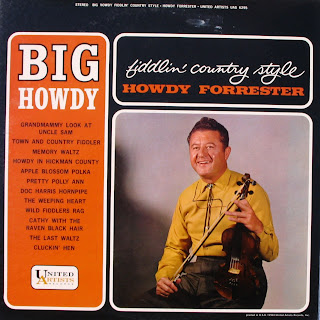 If you are a fiddlin` fan, you gotta hear this one!!
The great Howdy Forrester was one of the greatest bluegrass & Country fiddlers ever. Howdy was from Hickman County, Tennessee, and his real first name was Howard. He started to learn to play when he was likely about 10 years old. Sometime in his mid-teens he wound up playing professionally wit an outfit in Oklahoma (I don`t know all the particulars of his early years).
While in Oklahoma, or possibly just before going to Oklahoma, he partnered up with Georgia Slim Rutland, a few years older than Howdy, and was a pretty accomplished fiddler. Howdy learned much of his technique he is famous for while with Rutland. I imagine before playing with Rutland, Howdy was likely a pretty straight-forward old-time type fiddler. I think mabey Howdy & Rutland were together performing for a few years around Oklahoma & Texas, just before the World War 2 years.
I believe just during or just after the war Howdy got a pretty good break in music when he was hired by Bill Monroe. Monroe also hired Howdy`s wife to play accordian. Those earlier Bill Monroe sides with accordian was with Howdy & his wife.
I don`t know just how long Howdy was with Monroe, but along about 1950 or just after Howdy went to work with Roy Acuff & His Smoky Mountain Boys. Howdy is most well known for his career with Acuff, which lasted until Howdy died in the 1980`s.
Howdy toured with Acuff on the road till about the early 1970`s when he told Roy he was just burned out on touring. Roy replaced Howdy on road dates, but Howdy played the Opry with Roy till he passed away. After Howdy quit touring with Roy, he worked for Roy`s record label, Hickory.
Through the late 50`s up through the 70`s, Howdy recorded about a half dozen fiddle records. I think this LP is the about the first one Howdy made, if not it`s almost the first. I read somewhere that it`s thought that Howdy`s first fiddle LP was the first LP dedicated to country fiddle instrumentals. I don`t know if that`s right or not. Tommy Jackson may have beat Howdy to this. Also, in about 1949, Roy Acuff`s fiddler at the time, Tommy Magness, recorded with the Smoky Mountain Boys a 4 disc 78 album of fiddle tunes which was also issued on a 10 inch LP. I`m not sure when this 10 inch LP was issued, I believe mabey a little while after the 4 disc 78 album came out though. Mabey Howdy`s first LP may have been the first 12 inch LP issued, as I think the Tommy Magness 10 inch LP was likely the first country fiddle LP issued if you don`t count the size of the LP.
One more little fact about Howdy was that he really disliked his nickname. When his son was born some of his friends started calling him "Little" Howdy after his dad "Big" Howdy as Howdy had named his son Howard. Howdy soon put a stop to people calling him "Little" Howdy.
MANY of today`s country fiddlers are influenced by Howdy, either by directly learning from his recordings, or by listening to other fiddlers that were influenced by Howdy. I`d say anyone learning country fiddle from the early 50`s to the 70`s were certainly influenced at least somewhat by Howdy`s playing.
Some of the songs on this LP were written by Howdy, such as Doc Harris Hornpipe and Howdy In Hickman County. Doc Harris was a fan and close friend of Howdy. Howdy was also adept at playing polkas at hoedown speed. Howdy and Acuff`s harmonica player, Jimmie Riddle, often played polkas duet style on the Opry and on live shows.
In the 70`s, Howdy recorded some LP`s for the Stoneway label out of Texas. Stoneway was a well known label in the 70`s for country and bluegrass instrumental LP`s. I`ll be posting more Howdy Forrester stuff in the future---HAPPY LISTENING!!