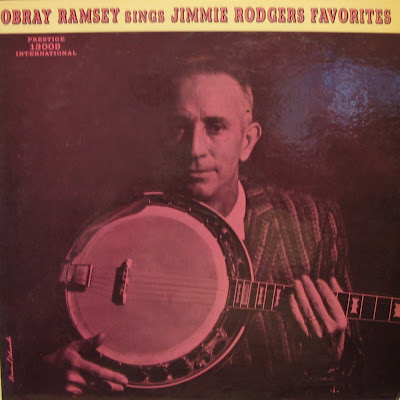 Here is on more Obray Ramsey LP. If you like this I encourage you to go back in the blog and find the other Obray Ramsey LP`s I have posted in the past.
The Obray Ramsey records I have posted in the past had more response from fans of the Archive that any other records. I do have one more of his LP`s I will post soon. Sorry the scans of the back of the LP cover don`t line up so well, I have to make more than one scan to get the whole cover. Hope you enjoy this one! 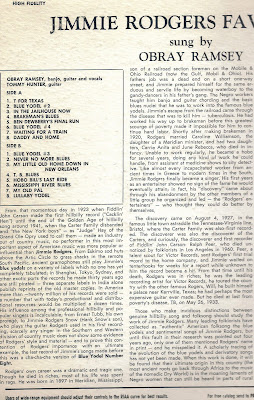 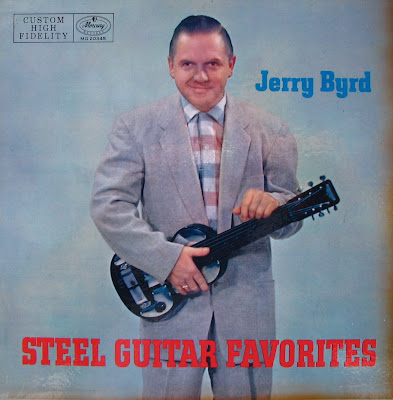 Jerry Byrd was arguably the best lap steel player of all time. I`m not going to attempt to go into any biographical information on Jerry Byrd, as there is plenty of information about him on the internet.
This LP has some great songs and is very well titled as Steel Guitar Favorites. About all the tunes are required standards of lap steel and even if you play country Dobro, these are still great tunes in that style.
Most of these tunes are old standard Hawaiian type songs, although the tunes are not "real" Hawaiian tunes. Steel Guitar Rag is likely the best known tune here, but was originally recorded as Guitar Rag by Roy Harvey & Leonard Copeland in the late 20`s in a standard guitar duet. Lime House Blues was a hit of Sol Hooppi, a popular Hawaiian player in the 20`s & 30s.
About my favorite here is Wabash Wah-Wah Blues. I play Dobro and sometimes play the old Wabash Blues. The "wah-wah" is an effect Jerry Byrd pretty much invented that can be made only with the old electric steel. I don`t play lap steel, but I believe the "wah-wah" effect is made either by tweaking the volume of the tone knob up and down quickly.
Jerry Byrd is hugely responsible for the steel guitar being used in country music. He is also enormously responsible for keeping Hawaiian music popular after the Hawaiian music "boom" of the teens, 20`s and early 30`s started dying out.
Enjoy this great record! Listen to it and you`ll see how much influence Jerry has had on country music sounds we heard in the late 40`s and 50`s and later. 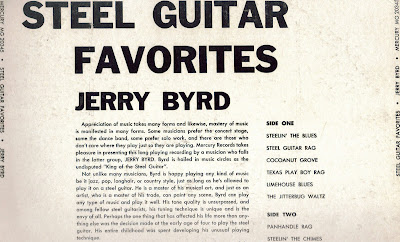