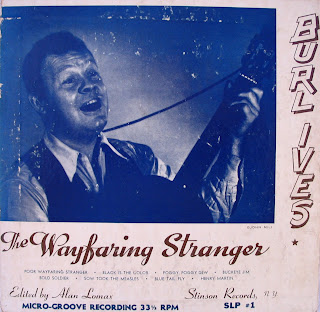 Here`s something that is surely un-common. A Burl Ives 10 inch LP on the Stinson Records label. The catalog number for this LP is SLP #1, so this must have been the first LP this label issued.I don`t know what year this was issued (there`s no date on the LP cover) but ole Burl looks pretty young. I think Columbia was the first out with 10 inch LP`s around 1948. I bet this is not much newer than 1948.
Any folk music fan will be familiar with Burl Ives. Besides maybe Pete Seeger, he is likely about the best know folk type singer. He was pretty popular in the 50`s.
I usually am not a fan of folk type music, especially protest type songs. I don`t really know why, I just never could get turned on to that. I wouldn`t call Burl a strictly folk singer though. His material had lots of old-time type songs and also alot of old ballad type stuff, especially English isle type ballads.
I really don`t know much about the personal life of Burl Ives. He was popular though. He was particularly good at connecting with children and had many kid type songs he performed. He was also in some movies. I remember seeing him in a western playing sort of a mean good guy once!
Now, I`ll give you a few words about 10 inch LP`s. Most of the 10 inch LP`s I`ve ever heard didn`t have any better sound quality than the 78`s that were being pressed at the same time. We usually think of LP`s having superior sound to the old 78`s, but that`s not usually the case with 10 inch LP`s. I just thought I`d say this so if you download this and the sound isn`t as good as you`d expect for an LP, this is the reason why. Hope you all like this one!