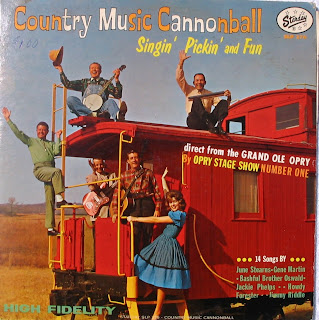 Here`s an LP by the great Smoky Mountain Boys & Girls, Roy Acuff`s Band. All of Roy`s band had made records on their own, mostly in the 60`s, but Oswald recorded on his own up into the 90`s.
The best well know would be Bashful Brother Oswald, playing dobro & 5-string banjo. The banjo he is holding on the album cover was one he had inherited from the great Dixie Dewdrop, Uncle Dave Macon.
Next in order of seniority would be Jimmie Riddle on piano & harmonica. He is holding a bass harp in the picture and was known to play this on Hee Haw when they had the harmonica band on the show. He is also famous for "Eeephing" on Hee Haw. I`ll be posting some Jimmie Riddle stuff on here someday. If you don`t remember him eeephing on Hee Haw, or even know what eeephing is, do an internet search or stay tuned here for when I post his stuff that I have.
Next we have Howdy Forrester, one of the best ever country fiddle players. He started playing professionaly around 1940 with Sunshine Slim Rutledge, then was with Bill Monroe in the late 40`s before Roy Acuff hired him. Check out my other post on Howdy if you want to learn & hear more.
Next is Jackie Phelps on electric guitar. Jackie was a good lead electric guitar picker and also played several other instruments including lap steel and a 2-finger bluegrass style banjo. His is likely most famous for being Jimmie Riddle`s partner on Hee Haw in the Eeephing & Hambone feature on the show. Jackie done the "hambone", which is a rhythm technique where a person slaps various body parts with their hands to keep time, sort of the same idea as playing a washboard.
June Stearns was a fairly new addition to the band when this LP was made. She was a good singer and had a real strong honky tonk type voice.
Lastly is Gene Martin on rhythm guitar and also as a lead singer. He was a brother to Benny Martin, who had at times fiddled for Roy some. Gene had a pretty good country voice and was good at imitating other country artists. He made at least one other LP for Starday that was mostly comedy doing imitations, I`ll post it sometime soon.
Starday albums such as these were nearly always songs recorded by artists for solo LP`s, sort of like a complimation record. Some of these songs are on other Starday LP`s, some were recorded just for this release I believe.
Starday would take material and put them on one LP to make it sound like a live show or some theme type thing. Sometimes the material used would be un-released stuff by a particular artist, material that didn`t make it onto the original released LP by the artist. One that comes to mind was by The Crook Brothers, Lost Indian. Lost Indian didn`t make it onto their LP with the McGee Brothers, but came out on a fiddle music themed LP Starday released later.
Starday was sort of a second string country label, although about at the top of the second string. If Starday hadn`t existed there is a lot of good country music by lesser known artists we likely would never have heard.
I hope you like this one!!