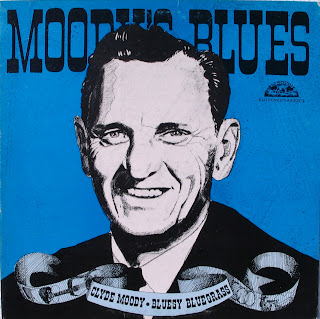 Hey folks----here is one of my new favorite LP`s!! This stuff is great.
Clyde Moody was from western North Carolina, where LOTS of great music came from in the 20`s when Clyde would have been a boy. No telling who all he had heard or been influenced by when he was young. There were several early country recording artists who came from the area Clyde was from.
Clyde first gained fame as one of Bill Monroe`s early Bluegrass Boys as a lead singer. One of Bill`s early hits was Six White Horses, which Clyde had written. Before being with Bill, he had played and sang in a band for Wade Mainer, but it wasn`t till he was with Bill that he became really well known because Bill`s act was SO popular at the time.
After about 5 years with Bill Monroe, he decided to quit and go solo and managed to get his own spot on the Grand Ole Opry for a while.
Clyde performed and recorded as a solo act and was very popular, but never gained super-star type success. He did have some pretty good hits through the late 40`s, especially Shenandoah Waltz. He became well known for waltz hits and was even called The Hillbilly Waltz King sometimes.
Now about the songs on the LP. This is some FINE stuff!! Clyde blends blues into bluegrass like nobody`s buisness!! He had a great voice for this type stuff. He also really shines on the instrumentals, playing some great finger-picking guitar. He plays guitar in a style that makes me think of the great Sam McGee, particularly on the tune Moody`s Blues, which sounds like a Sam McGee song sure enough. It sounds like phrases from a few Sam McGee songs titled Buck Dancer`s Choice and Ching Chong.
Another couple of my favorite songs on this LP are If I Had My Life To Live Over, which Sam & Kirk McGee also recorded, and Conversation With Death, which has became quite famous from the Ralph Stanley performance in the movie O Brother Where Art Thou.
Well---I guess I should quit talking up this LP, just listen and hear this great stuff for yourself!!!