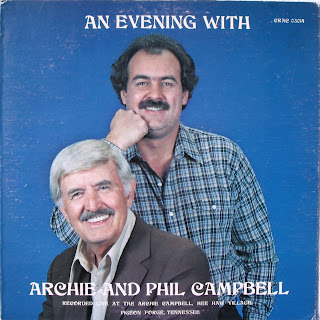 Anyone that was born during or before the 70`s that know anything at all likely knows who Archie Campbell is----the barber, the judge, the doctor (among other things) from Hee Haw!!
Archie was from Bulls Gap, Tennessee and started his show buissness career waaaaay back in the mid 30`s in Knoxville, Tennessee. He was a performer on WNOX, which in the the 30`s was sort of a tryout place for the Grand Ole Opry. He would have been a WNOX at the same time that Roy Acuff was there before moving on to Nashville and the Opry.
I don`t know what sort of stuff Archie did in Knoxville, likely music stuff as he had a pretty good singing voice.
I don`t know anything about Archie till he shows up at the Opry in the 50`s as a sort of sophisticated type comedian instead of the old hillbilly, backwoods type comics usually seen on the opry like Minnie Pearl, Rod Brasfield or the Duke Of Paducah. In the late 50`s into the 70`s he recorded several records for RCA & Starday, some music and some were comedy LP`s, which were pretty popular in the 60`s.
THEN----he really got famous when Hee Haw came along. He was a comedian on Hee Haw playing several different characters in the same skits for his whole run on the show till he passed away. The Doctor, the Judge, the Barber, the moonshier, and probably what he was best known as doing on the show, the song Pfttt You Were Gone, which was actually a song released as a single in the 60`s.
This particular LP was likely the last record Archie had out. I believe it would have been recorded in the mid 80`s. It is of a live show recorded at the Archie Campbell Hee Haw Village at Pigeon Forge, Tennessee with his son Phil playing a few second parts in some of the protracted stories Archie tells. There are some of his classic routines here.
I hope you all like comedy records, I`ll post more country comedy records as time goes along, some of these country comedy records are sort of hard to come by----enjoy!!