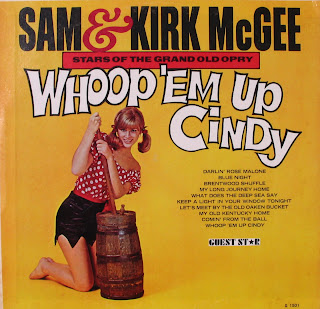 Here is an artist not many of you may know of. Kirk McGee (Nov. 1, 1899-Oct. 24, 1983) was an old-time banjo picker, fiddler, guitarist and singer. Kirk was on the Opry with his guitar-virtuoso brother Sam McGee & Uncle Dave Macon, starting likely in 1926 till his death in 1983, making 57 years of service on the Opry.
Throughout this long music career (he sold real estate also) he done may things. He was a great banjo picker in both finger picking & claw hammer styles. His finger picking almost has a machine gun sound to it with the rapid fire sound of notes, but he was not a bluegrass banjo style picker. It was a pre-bluegrass style all his own influenced by old-time country, ragtime & even blues music. His claw hammer style was a great driving rhythmic style. He was also an old-time fiddler, good but not great. He played fiddle for years on the Opry for The Fruit Jar Drinkers. He was also a good back-up guitarist for his brother Sam`s guitar solo songs as well as a proficient finger style guitarist himself, but not on-par with Sam`s guitar.
These 2 LP`s are sort of odd in a few ways. I have no idea when they came out, mid to late 60`s I`d say. They both list Sam & Kirk as the artists, but Sam isn`t to be heard on any songs unless he just played back-up rhythm in the distant background. Another odd thing is Kirk had played a big part in defending old-time music staying on the Opry on through the years as country music modernized, but on these records we have elctric guitar leads and someone on bluegrass style banjo on some of the banjo instrumental tunes which make sort of an interesting contrast between bluegrass banjo and Kirk`s raggy banjo picking style.
We have quite a range of songs here. Some Kirk wrote like Blue Night & Brentwood Shuffle. Others are hard-core old-time like Comin` From The Ball & Roll On Buddy, old re-worked pop songs like Keep A Light In Your Window Tonight & Let`s Meet By The Old Oaken Bucket, old blues tunes like Sittin` On Top Of The World & Milk Cow Blues, & even some old minstrel type tunes like Massa`s In The Cold, Cold Ground & My Old Kentucky Home.
Kirk surely had a wide range of material in his basket------so enjoy!! 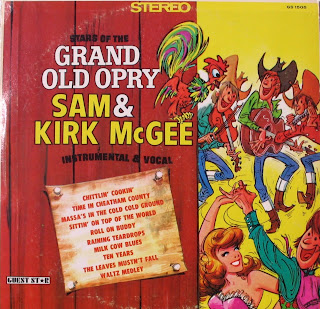