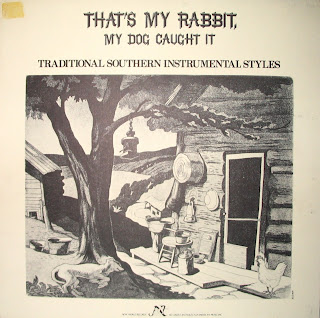 Well folks, here`s an interesting LP. It`s on the New World Records label and was issued in 1978.
One thing neat about this LP is that some of the tracks are from 78`s recorded by commercial companies in the 20`s some are field recordings from the 30`s on up to the 70`s.
There is quite a variety of stuff here too, such as Obed "Dad" Pickard`s jew`s harp solo recording of The Old Grey Horse.
Other unusual stuff here is a fife solo by Marion Reese, which is not really the type of stuff I like, but interesting none the less.
We also have solo fiddling such as Allen Sisson`s Rymer`s Favorite from the Edison label.
Pete Steele`s banjo solo Spanish Fandango is great also.
This LP would be a great way to be introduced to old-time music styles as we have solo stuff, cajun music, string band stuff, a dulcimer tune and just a large variety of stuff---so ENJOY!!