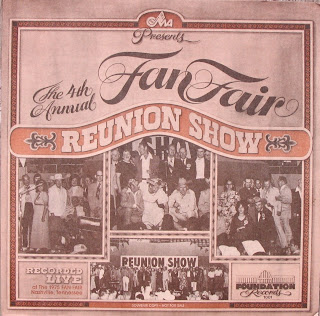 All-righty folks, here`s a really neat LP and really should be called Opry Old Timers Reunion. This material was recorded at the Ryman Auditorium at the Fan Fair Reunion Show in 1975. Most of the artists on this I know of, but there were 2 or 3 I don`t know anything about.
One of my favorite things on it is Alcyone Bate Beasley, Dr. Humphrey Bate of the Possum Hunters daughter, singing a song. Starting on the Grand Ole Opry at age 13 in 1925, she stayed on for years and also became an employee of WSM.
Another highlight to me is Sid Harkreader, also starting on the Opry in 1925. He gives the little nonsense poem that the "Solemn Ole Judge" George D. Hay always closed the show with, but unfortunately didn`t get a song included. Too bad too, because he was a great old-time artist
One more of my favorite cuts is Kirk McGee & The Fruit Jar Drinkers doing a tune I`ve never heard before called Nubbin Ridge. All the members of this band are veterans from the very start of the Opry in 1925. All the people in this version of the Fruit Jar Drinkers are "consolidated" from other old-time string bands from the early days of the Opry like The Possum Hunters, The Dixie Clod Hoppers, the original Fruit Jar Drinkers and The Gully Jumpers.
Too bad they don`t have performances of Sam & Kirk McGee doing a solo, DeFord Bailey the Harmonica Wizard or The Crook Brothers as all were still living at the time. Of course there is only so much stuff an LP will hold. I sure wish I could have been AT the show!!!!!-----Allen