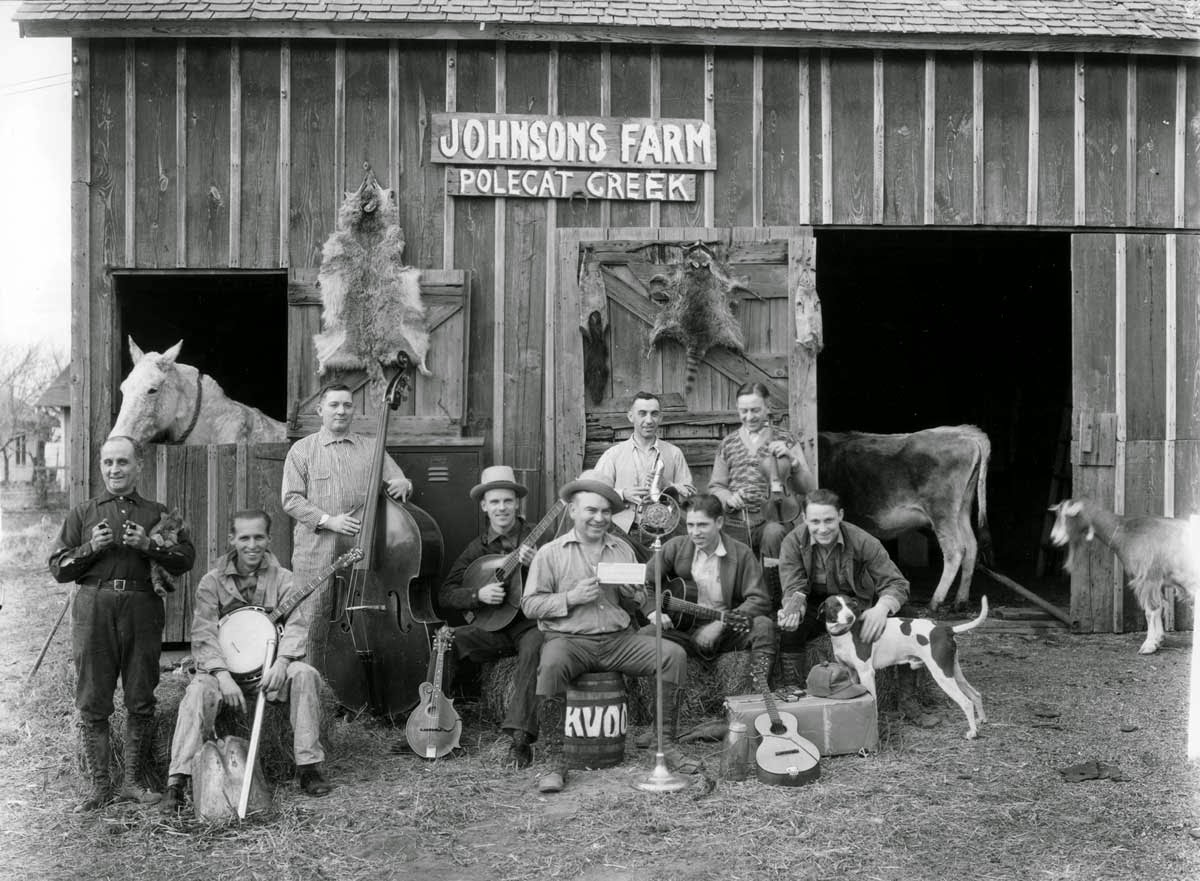 Well, here`s some music you won`t likely be able to listen to all in one place. Jimmie Wilson`s Catfish String Band was sort of miss-named as a string band, they were actually what you might call a novelty band. Many of the sounds you will hear are home made or dime store type instruments. Such as the slide whistle and the bones. Another unusual sound you will hear is the bass fiddle played with a bow. At least I think it`s a bass, could be another home made instrument of some kind. The names of the members of the group, as far as I can find out with my limited research, were Jimmie Wilson, Jack Gillis, John Ed Harris, Dick Fahrenwald, Orrin Potter, Charlie Potter, Franklin Ward, Bob Dennis, and Speedy Mouleer. I have no other information about the group except that they were based somewhere in Oklahoma and must have played on KVOO in Tulsa by information we can obviously see the picture. All the information I found was from an internet search, so anyone can do more reasearch as easily as what I done. I also found the group picture on the internet.
They had a session for OKeh in 1925 and another for Victor in 1929. The discs I have are in pretty good condition and these are plenty listenable, although the OKeh discs are noisier than the Victor discs. Happy downloading! 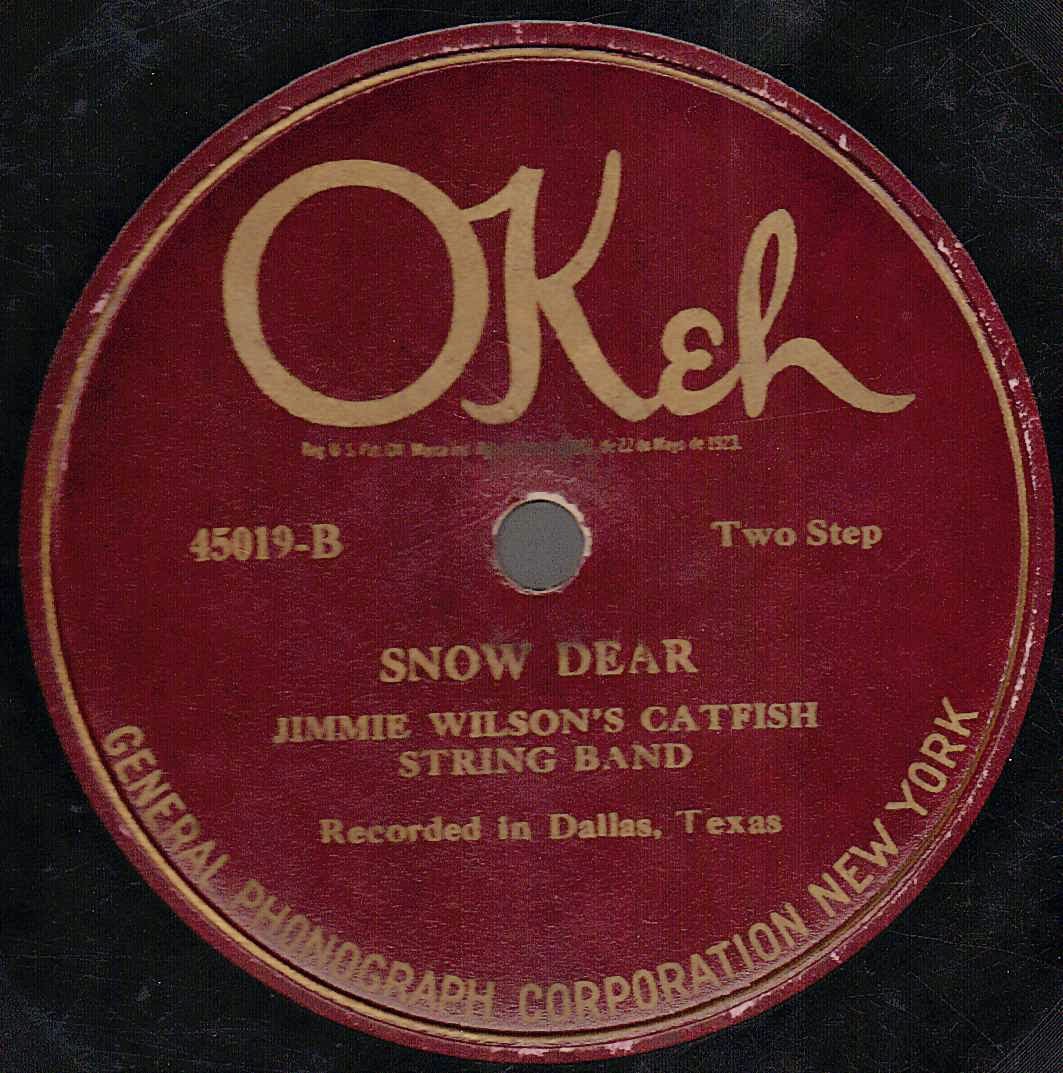 Jimmie Wilson`s Catfish String Band / OKeh 45019
Let Me Call You Sweetheart / Snow Dear
recorded October 21, 1925 in Dallas, Texas
The two tunes here were quite common and popular tunes from earlier in the 1900`s. Interesting that deer is mis-spelled in Snow Deer, this tune was a song about an Indian maid much like the old song Red Wing. 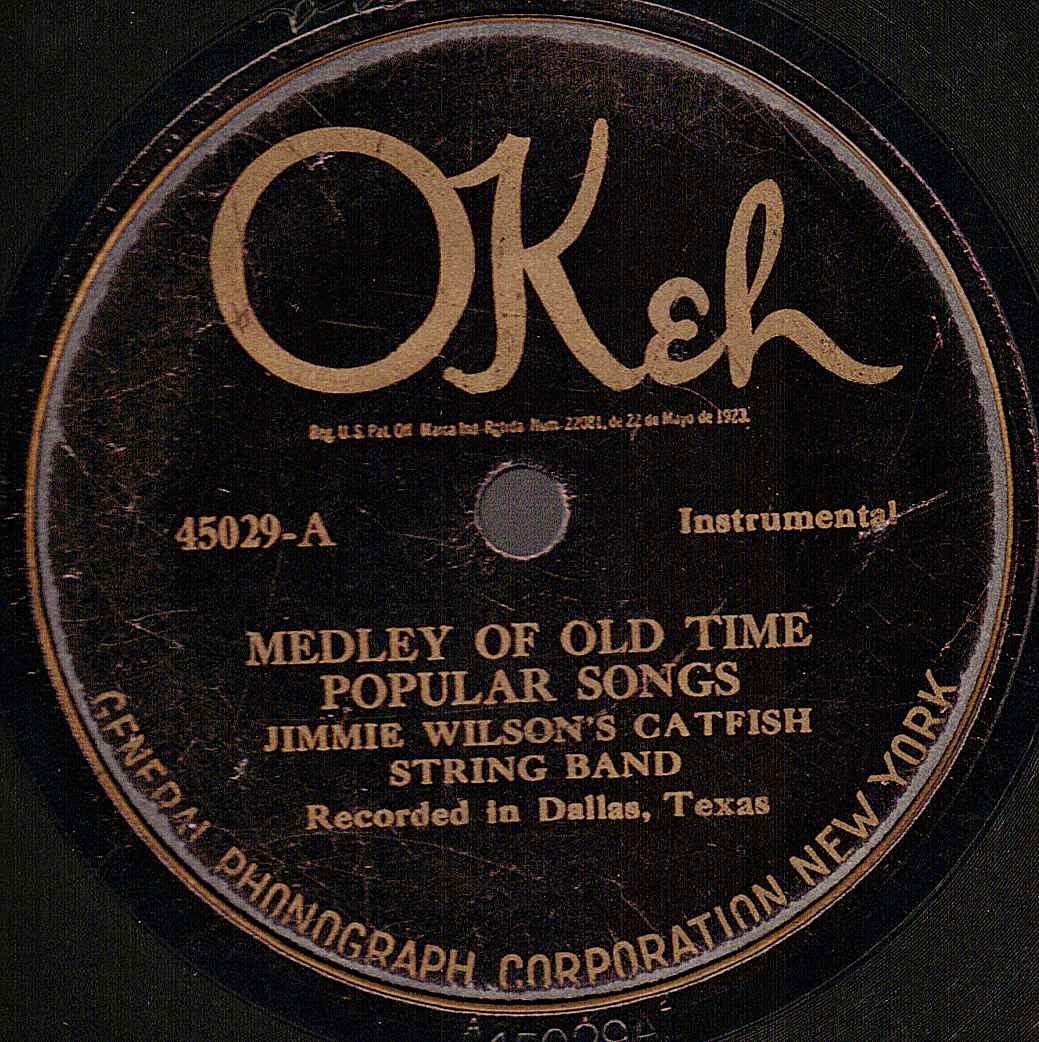 Jimmie Wilson`s Catfish String Band / OKeh 45029
Medley Of Old Time Popular Songs / Over The Waves
session information same as above
Over The Waves is of course one of the all time, most popular waltzes. The tunes in the medley side are ??? ( I don`t know the name of the first tune, but have heard it), Bill Bailey,  There`ll Be A Hot Time In The Old Town Tonight, ??? I don`t recognize the last tune either. 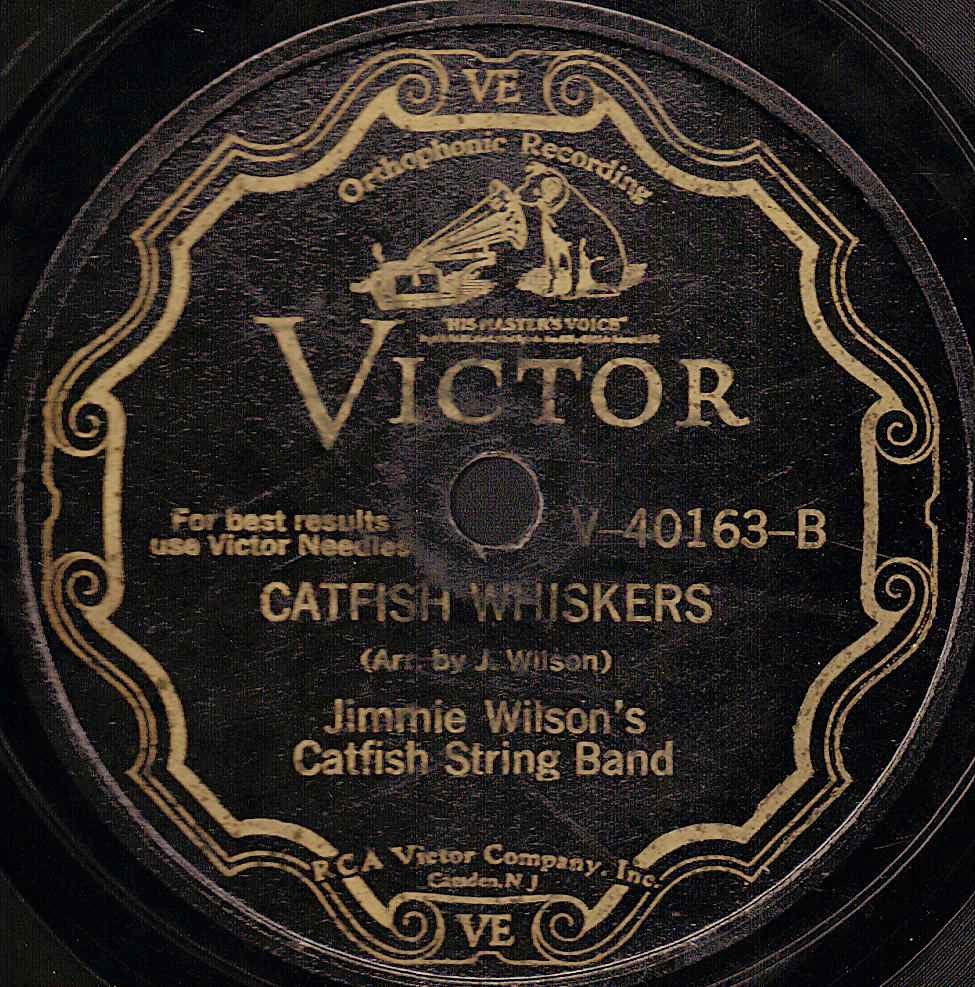 Jimmie Wilson`s Catfish String Band / Victor V-40163
She`s Comin` `Round The Mountain / Catfish Whiskers
recorded October 17, 1929 in Dallas, Texas
She`s Comin` `Round The Mountain is the common old tune.  Catfish Whiskers is a medley with the first tune unknown to me, Bill Bailey, There`ll Be A Hot Time In The Old Town Tonight, and the last tune is also unknown to me. 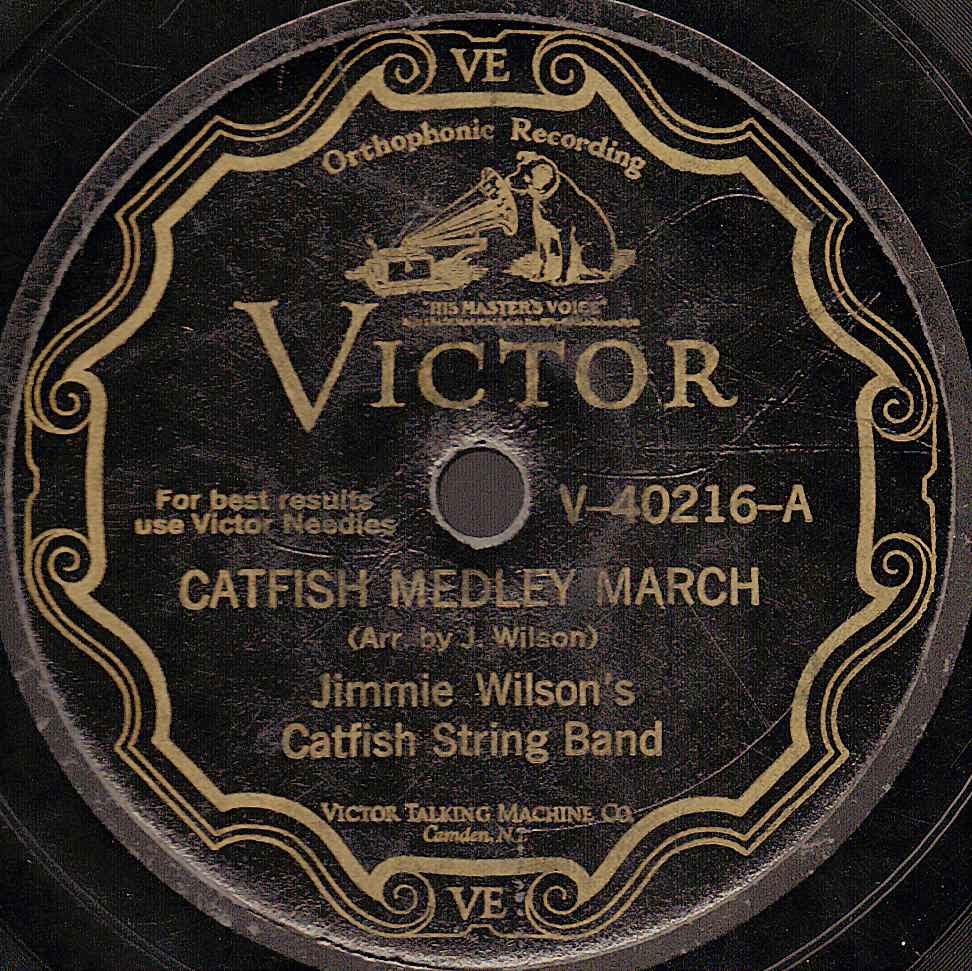 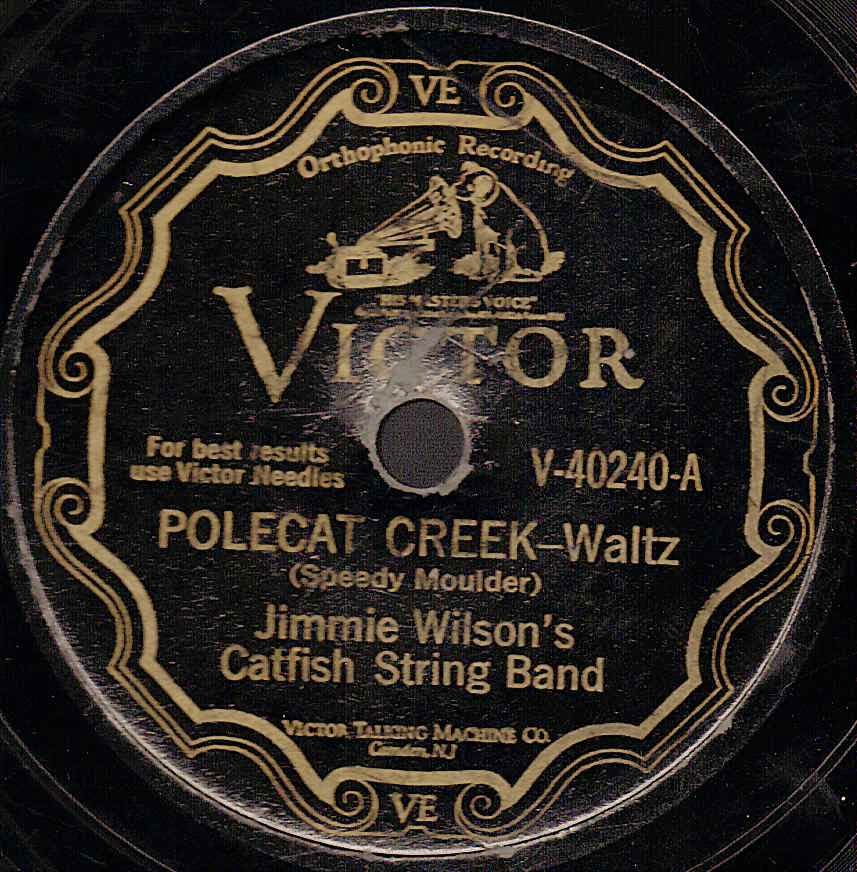