Here we are with the next two volumes in the J.E. Mainer series. Volume 13 is the first volume issued after J.E.`s death---- 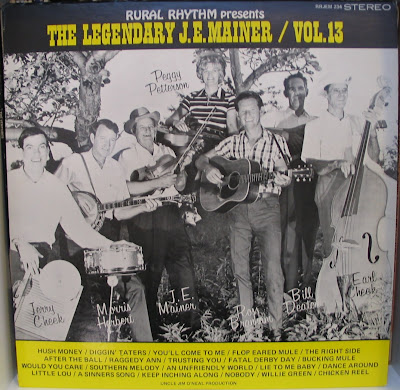 Track list----
1. Hush Money (sounds like a 1940`s hillbilly tune)
2. Diggin` Taters (this is actually the old time Liberty like the Skillet Lickers recorded, appears to be a Georgia tune)
3. You`ll Come To Me (don`t know this one)
4. Flop Eared Mule (the common old fiddle tune)
5. The Right Side (never heard this anywhere else)
6. After The Ball (the familiar old song, possibly with English roots)
7. Raggedy Ann (a common alternate title for Ragtime Annie)
8. Trusting You (sounds like a 1950`s-ish country tune)
9. Fatal Derby Day (an old English ballad popularized by Bradley Kincaid, also performed some by Grandpa Jones)
10. Bucking Mule (this don`t really sound like any mule fiddle tune I know except for the fiddle doing the mule bray)
11. Would You Care (an old tune Roy Acuff recorded, could be J.E.`s source)
12. Southern Melody (sounds like a tune made up by J.E.)
13. An Unfriendly World (don`t know this number, sounds almost Carter Family-ish)
14. Lie To Me Baby (sounds like a sort of 1940`s tune, I can imagine hearing this on a juke box in an old country beer joint somewhere way back in the woods)
15. Dance Around Little Lou (actually the tune is Skip To My Lou)
16. A Sinner`s Song (don`t know this song)
17. Keep Inching Along (sounds like this could have originally been a spiritual type religious song)
18. Nobody (a pop song hit from the early part of the 1900`s sung by Bert Williams)
19. Willie Green (never heard this one anywhere else, may have been inspired by some old blues song)
20. Chicken Reel (the common old fiddle tune) 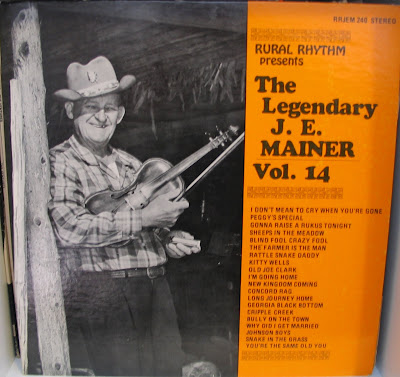 Track list-----
1. I Don`t Mean To Cry When You`re Gone (unfamiliar song to me)
2. Peggy`s Special (this is an old Jenks "Tex" Carman tune he called Hillbilly Hula)
3. Gonna Raise A Rukus Tonight (common old song, I believe originally was a minstrel tune)
4. Sheeps In The Meadow (tune sounds similar to the Skillet Lickers tune Ride Old Buck To Water)
5. Blind Fool Crazy Fool (the common old song called Cabbage Head, or also Three Nights Drunk)
6. The Farmer Is The Man (an old Fiddlin` John Carson song)
7. Rattle Snake Daddy (an old Bill Carlisle he recorded in the 1930`s)
8. Kitty Wells (an old song that may have English origins, recorded originally by Bradley Kincaid and also Vernon Dalhart among others)
9. Old Joe Clark (the common old tune)
10. I`m Going Home (the tune is a common old tune for several different old songs, this set of words is unfamiliar to me though)
11. New Kingdom Coming (an old tune dating back to Civil War times, recorded in the 1920`s by Sam & Kirk McGee as Old Master`s Run Away. Often played as an instrumental)
12. Concord Rag (J.E.`s signature tune)
13. Long Journey Home (common old-time & bluegrass song, also called Black Smoke sometimes)
14. Georgia Black Bottom (the Cofer Brothers record from the 1920`s may have been the source for this tune)
15. Cripple Creek (one of the most common old numbers)
16. Bully Of The Town (a well known Uncle Dave Macon tune, originally a minstrel show and vaudeville number)
17. Why Did I Get Married (an unfamiliar song to me, done to the music from the Prisoner`s Song)
18. Johnson Boys (the common old number)
19. Snake In The Grass (an unfamiliar tune to me, may have spiritual type song roots)
20. You`re The Same Old You (not sure about this one, I believe I may have heard it as You`re The Same Old Used To Be) 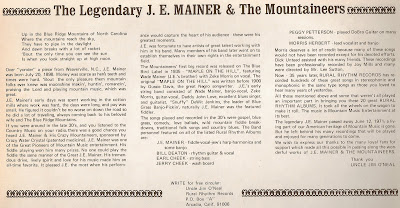