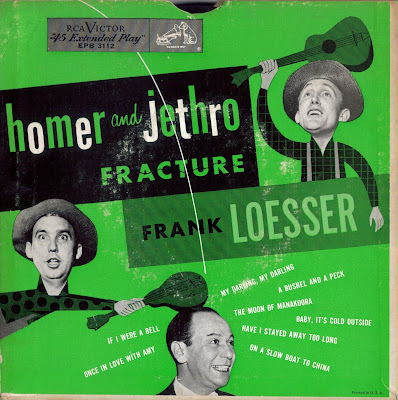 I am not a fan of 45`s! Just the size of them are un-handy to me. When you try to clean them it`s really hard to keep them from slipping around. Also, the quality of the sound is never up to par with an LP to my ears for some reason. It`s time consuming to get them copied off also. I`d rather use that time on 78`s myself. Anyhoo....
Here is Homer & Jethro. They were a team that started in the 4o`s sometime, they may have even got going some in the late 30`s. Homer Haynes played guitar and Jethro Burns played mandolin. They were influenced by jazz music and were EXCELLENT pickers. They also had pretty good harmony together singing also.
I always thought Homer seemed funniest, come to find out Jethro wrote most of their songs and jokes.
Most of their material consisted of novelty songs, especially what Lonzo & Oscar called "No.2 songs" (Homer & Jethro`s And Lonzo & Oscar`s material was very similar, they even recorded many of the same tunes). A No.2 song was a mainstream song, usually one that had been a No.1 hit, that was taken and made a parody of. A good example is Baby, It`s Cold Outside (with June Carter). Often, a No.2 song would actually use No.2 in the title. An example would be Hank Snow`s hit Movin` On, which was parodied and recorded by both Lonzo & Oscar and Homer & Jethro as Movin` On No.2
All the song parodies here was written by Frank Loesser, thus the title. I don`t know anything about Mr. Loesser. Apparently, Mr. Loesser was a fan of Homer & Jethro`s parodies and loved it when Homer & Jethro parodied a song he wrote. I seem to remember reading somewhere once that he requested Homer & Jethro to do this album. I guess Mr. Loesser was a believer in the old saying "There is no such thing as BAD publicity." I wonder if any of these parodies boosted the sale of the "legitimate" version of the songs.
In my opinion, this is not one of Homer & Jethro`s better albums. I posted it just to get the 45`s out of the way so I could put them on the shelf. This album also came out on an LP. I`d say the LP may have been a 10 inch LP due to the number of songs. If it came out as a 12 inch LP I`d say it may have a couple more songs on it than this 45 set. I just don`t know about the LP size (or sizes) issued of this album.
ENJOY!

The next two scans are from the inside of the album--- 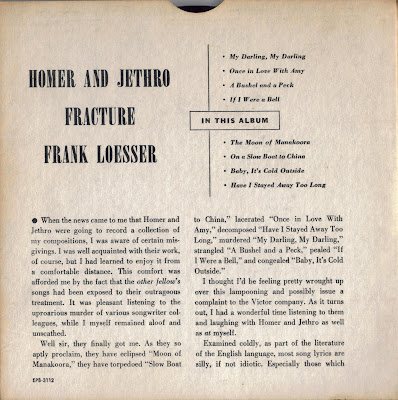 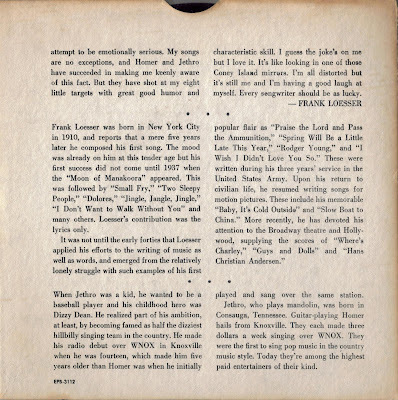 This last scan is from the back of the album--- 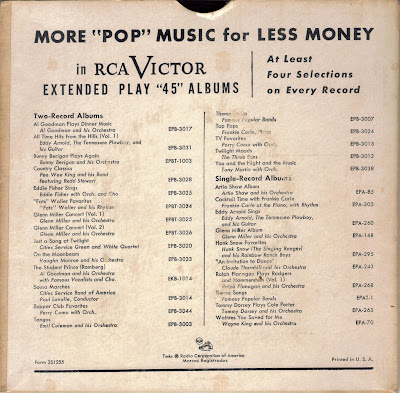