Here is another bunch of my 78`s for your listening pleasure. As always, the condition of these are from mint to condition to one step away from the dumpster...so----some sound great, some others are just barely listenable. I`ve tried to make them sound the best I can.
Now---here is a little note of warning I guess you could say. Some of these songs have some certain words in them not considered acceptable today, all related to race. Some of these use the words commonly used in the teens and 20`s for certain races. I`m sorry if it offends someone. BUT---we can not judge these recordings and the language common at the time the records were made by today`s standards. Please, if you listen to these songs, don`t be offended. I`m going to put in the description of the records which songs has offensive words in them. The most polite term I can think of is to call them Minstrel Songs. So, if you see a song title with Minstrel Song by it, you can choose whether or not to listen to the tune. I hope this works for me and everyone out there. Using the term Minstrel Song is actually pretty accurate, most of these songs were at least influenced by the minstrel shows. Happy Listening!!

Bill Bailey, Ain`t That A Shame/I Got Mine - Champion 15503
John McGhee (as John Hutchens)
Recorded Dec. 31, 1927 & April 24, 1928
Both of these songs are funny songs. The Bill Bailey, Ain`t That A Shame is not the typical Bill Bailey song we all know, but is similar to Uncle Dave Macon`s song Ain`t It A Shame To Keep Your Honey Out In The Rain. I got Mine was also recorded by Fiddlin` John Carson and also Gid Tanner & Fate Norris.
BOTH songs are Minstrel Songs 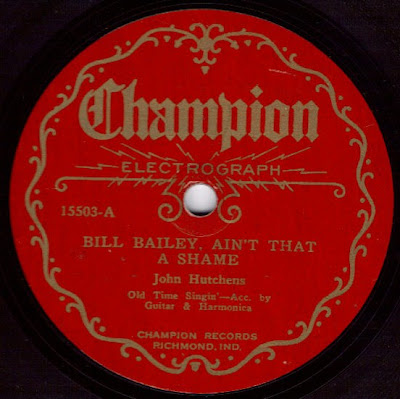 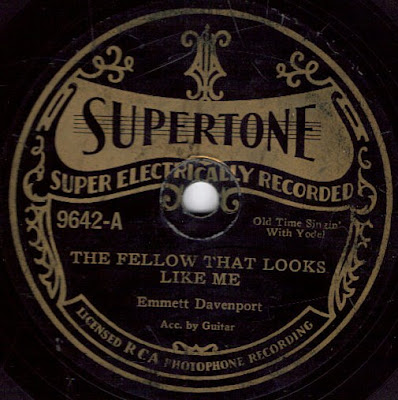 Carolina Stompdown/Hard Times Breakdown - OKeh 45153
Aiken County String Band
Recorded Sept. 19, 1927
Two great old time instrumentals. My copy of this record is pretty trashed, but it don`t sound too bad at all considering how bad the condition of the disc is. Carolina Stompdown is what we`d usually call Soldier`s Joy but is unusal because they they play it in two different keys. Hard Time Breakdown is a typical rag of the times. 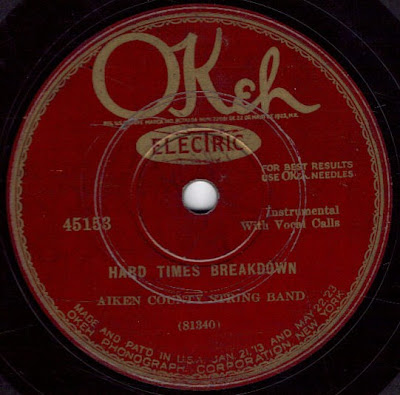 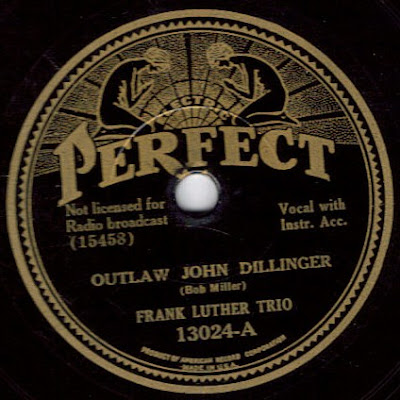 On The Dummy Line/Down In The Cane Break - Conqueror 7574
The Pickard Family
Recorded Feb. 6, 1930
I had always wondered about "Dummy Line" Dummy is used here for mute or silent. The Dummy Line was a nickname for a certain railroad line that uses condensing steam engines. The exhaust steam went trough a condenser (like a corn licker still) and turned the steam back to water to re-use in the engine`s boiler. The condenser acted as a muffler, thus making the engine fairly quiet, or "dumb". My copy is pretty wore out, the vocals aren`t real clear, especially on Down In The Cane Break. 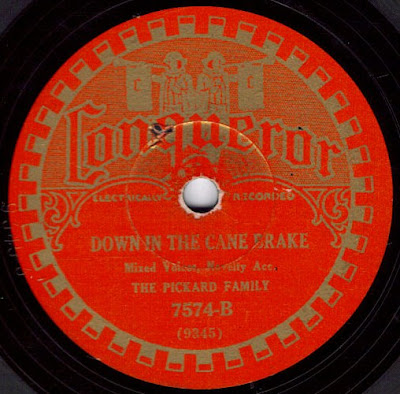 Over The Waves/Red Wing - Supertone S2092 (from Brunswick masters)
W.W. MacBeth
Recorded Oct 30, 1929
Two absolutely great harmonica solos. This version of Over The Waves may be about the fanciest I`ve heard! 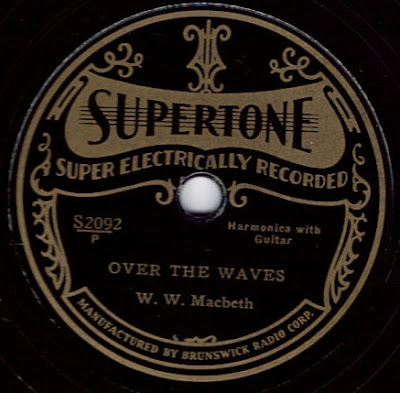 You Shall Be Free/Old Lady And The Devil - Columbia 15336-D
Bill & Belle Reed
Recorded Oct. 17, 1928
A pretty rare record, the only record they recorded. Both are comedy songs.
You Shall Be Free is a Minstrel Song 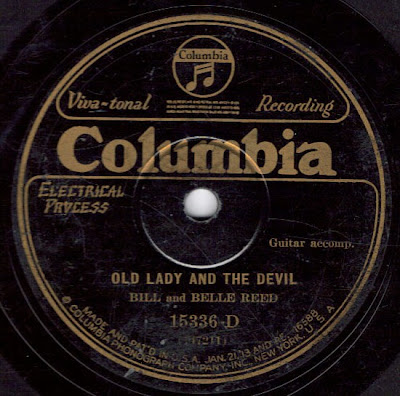 The Bully Song - Part 1&2 - Columbia 15302-D
Vernon Dalhart
Recorded Sept, 21, 1928
Strange that on the Columbia label that they issued discs under the name Vernon Dalhart and also many songs as Al Craver. This is the song more commonly known as Bully Of The Town and is song and skit, straight from the minstrel show stage. My copy of this is pretty rough.
BOTH sides are Minstrel Songs. 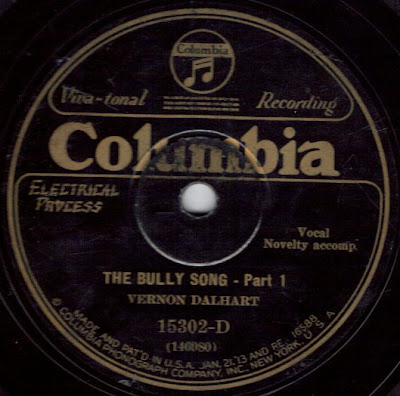 If You Don`t Like My Ford Coupe, Don`t You Cadillac Me/Golden Memories Waltz - Columbia 15416-D
Owens Brothers
Recorded Dec. 3, 1928
The Owens Brothers were the country version of The Stamps Quartet, that is a gospel quartet possibly attempting to "cross over" to country music. On the Ford Coupe song, they remind me very much of the Georgia Yellow Hammers. The Ford Coupe song is sort of an old pop type song, the waltz is an instrumental. 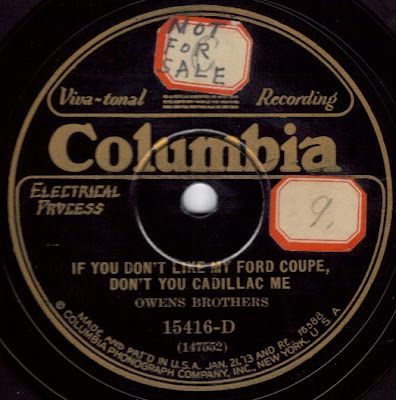 That`s My Weakness Now/Mama`s Grown Young, Papa`s Grown Old - Perfect 12449
Paul Johnson
Recording date unknown to me.
This is a pop recording. The reason I got this is the fact that Gid Tanner recorded a parody of That`s My Weakness Now and I wanted to hear the original song. There is practically NO similarity between the original and Gid`s parody. The Mama`s Grown Old tune was recorded by some early blues artists as well. 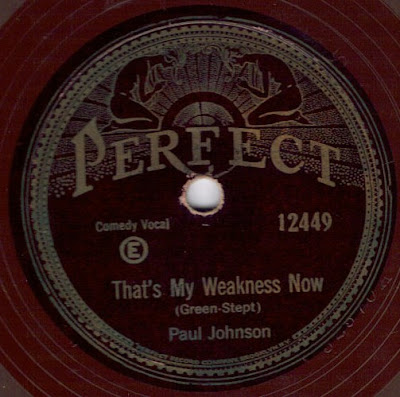 Missouri Waltz/ `Till We Meet Again - Brunswick 2918
Palakiko & Paaluhi
Recording date unknown to me likely between 192 & 1925.
Great Hawaiian guitar music here. Listen to this to hear where the steel guitar and dobro in country music originally came from. 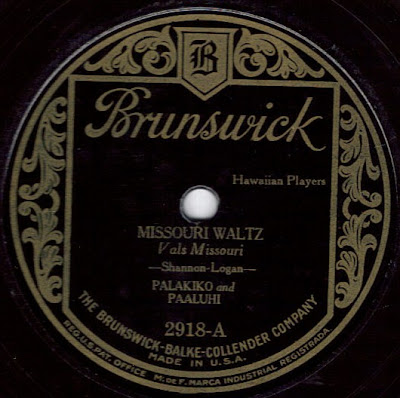 Somebody`s Done Me Wrong/Tishomingo Blues - Emerson Record No. 913
Eddie Nelson
Recording date unknown to me, likely 1917 to 1920.
I got this because when I saw the title Tishomingo Blues it was so interesting to me I had to hear it. Tishoming was also one of the towns in the movie Oh Brother, Where Art Thou?.Old pop hokum type songs. We have sort of an orchestra with jug and other effects here.
Although the labels describes the songs as "Coon Character Songs", neither song has any racial slurs in them. 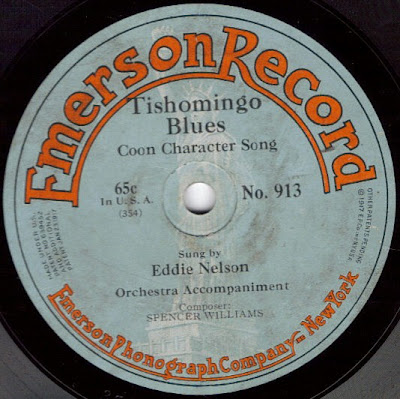