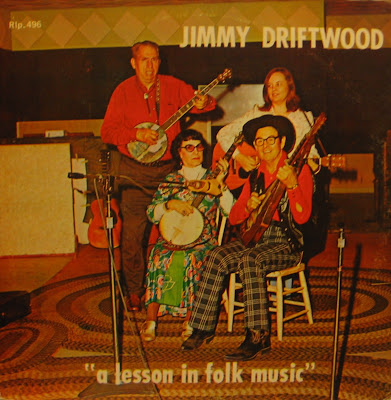 This is a pretty neat record as it is presented actually as sort of a lesson. This material was apparently recorded at a old-time music workshop of some kind. Mr. Driftwood talks some an each track (if I remember right) about the song (source, how old, etc.) Or about the instruments he is playing or all of the above.
Anyone that knows anything about at all about Jimmy Driftwood knows he wrote the words to the Johnny Horton hit The Battle Of New Orleans, which is set to the old fiddle tune the Eighth Of January. The eighth of January is the actual date of the battle at New Orleans with "Old Hickory" (who became a national hero and eventually a president by the name of Andrew Jackson) leading the American forces to victory over the English army. The most interesting fact of this battle to me is that it was fought after the war was actually over. A peace treaty had been signed, but since there was no speedy way to relay news then, neither side was aware that the war was already over.
Jimmy Driftwood is still pretty well known around the area where I live in the Missouri Ozarks and in northern middle Arkansas. He is largely responsible for Mountain View, Arkansas becoming an attraction for traditional musicians. He (as well as Grandpa Jones) had a dinner theater in Mountain View for many years. Also, Mountain View has the Folk Center that he helped get going. They have many music and other traditional activities and festivals throughout the year.
Just as a side note, Bookmiller Shannon was very well known in the area around Mountain View as an old-time banjo picker. Jimmy and his wife Cleda, as well as Bookmiller Shannon, have all passed away some time back. I don`t know anything at all nor ever even heard of Barbara Sanders.
I wonder when people quit using the term "folk music" for old-time music, or when the term "old-time music" came into common use for this type music. I have saw many references in articles from the 30`s & 40`s using the term folk music for what we now call Old-time music. Of course we all know what became known as folk music in the 50`s, music mostly played by "city folks" of the older style country material, then evolving into all the protest type stuff and eventually evolving into stuff such as pshychodellic type stuff that my ears can`t even start to tolerate. No offense intended here if you like that type of music. All the early folk type bands singing traditional material sound phony to me. As I said, no offense to people who like that type music, I`m just on a little rant here. To each his own!!
Hope you like this LP, it`s a pretty neat record. 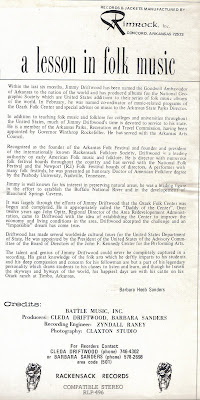