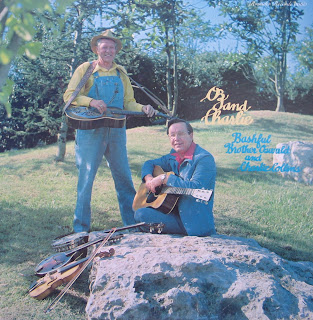 Here is one of my favorite LP`s by one of my musical mentors, Bashful Brother Oswald. This is one of the artists (and also one of the LP`s) that made me want to play old-time music.
Oswald was a great old-time banjo picker and singer, but is best known for practically inventing a style of playing the Dobro. Oswald is likely most well known for being the Dobro player in Roy Acuff`s Smoky Mountain Boys. He held that "gig" for about 55 years!! Who works one job for 55 years!!?? He performed on the Grand Ole Opry for about 62 years, playing as a solo Opry member after Roy Acuff passed away.
Oswald`s Dobro style is so unique and immediately recognizable that it could definatly be argued that without the style of Oswald`s dobro playing that Roy Acuff might not have eventually became "The King Of Country Music". Roy`s sad (sometimes even morbid) songs coupled with the sounds of Oswald`s Dobro could bring tears from audiences.
Oswald was heavily influenced by Hawaiian music and his style of playing Dobro shows it with all the trills and slants he done. Listen to Hilo March, a Hawaiian song, which is one of my favorite Dobro songs.
Now... not only is Oswald great, Charlie Collins is certainly one of the best flat top pickers of all times. Also, Charlie is one of the greatest rhythm guitar pickers ever in my book. He got with Roy Acuff about 1965ish and styed with him till Roy passed away. Charlie also has several LP`s & CD`s of his own as well as these LP`s recorded with Oswald. Charlie has recorded playing rhythm guitar on many records, including recording under Bill Monroe a time or two. Charlie is also a good bluegrass style mandolinist and plays good fiddle in sort of a cross between bluegrass and old-time fiddle styles, sounding more bluegrass influenced.
The other two artists on this LP likely need no introduction, the great Norman Blake on mandolin and some lead guitar, and Sam Bush playing fiddle and guitar.
Hope you all like this one. Let me hear from you, it`s nice to know if you all enjoy what I post. 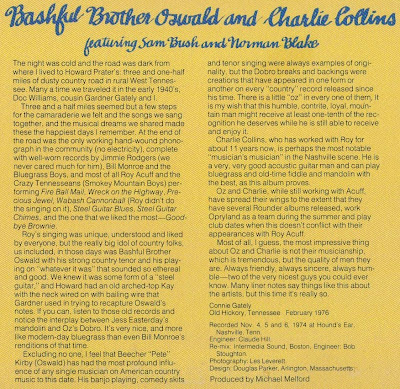 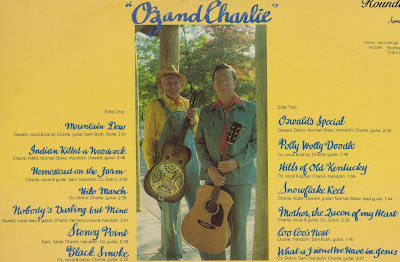