How about just one more transcription today? I got a few Lew Childre transcription discs a year ago and finally got around to transferring them. Some of these have been re-issued before. These are so great I think. Lew Childre is about the most natural artist for transcription shows I think I ever heard. He makes it fell almost like he`s right in your living room instead of hearing a disc. Lew Childre also had a unique guitar style, heard here very well. He played old Hawaiian steel, which in hes case was a Martin acoustic guitar played lap style. He pretty much only accompanied himself on the guitar with practically no instrumental solos on the guitar, just a few short, one string phrases here and there. Download and enjoy! 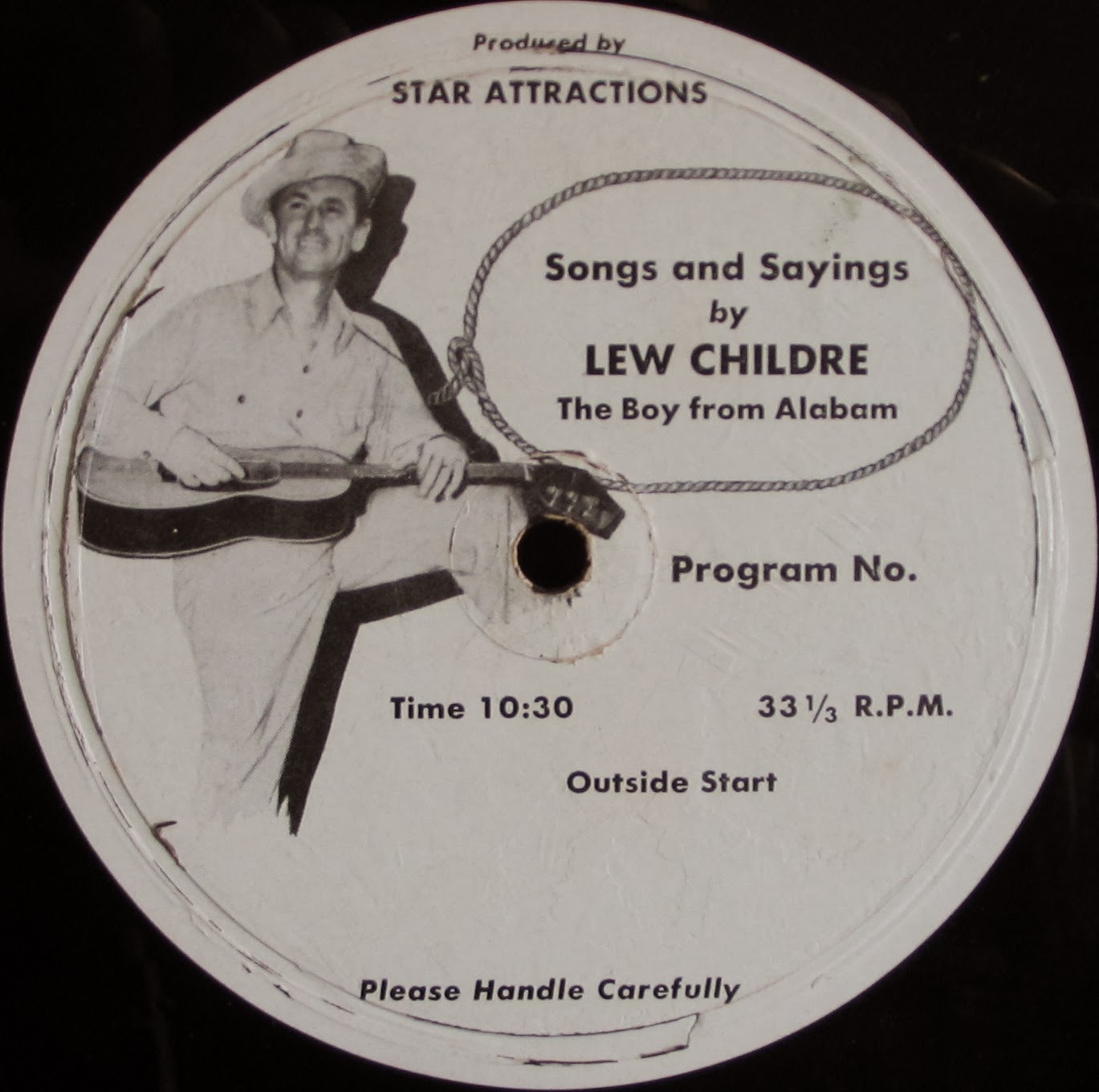 Program No.1
1. intro/Riding On The Elevated Railroad
2. I`m Heading For The Blue Horizon/Big Eyed Rabbit
3. Don`t Say Aloha When I Go/outro

Program no.2
1. intro/Melindy`s Golden Wedding Day
2. Maple On The Hill/When The Fog Forms On The Rio Grande
3. When Lew Sings His Yodel-Ay-Dee-Hoo/outro

Something I plan to start doing is posting more 78`s than I had been for the last couple of years. What I`m planning to do is post artists that I have that only recorded one disc, artists that I have all the discs that they recorded, and then just some discs once in a while that I just want to post with no rhyme or reason. So here we go---
This is the only disc that Miner Hawkins recorded. The side, The Song Of The Sea, has been re-issued a few times, but I`d never heard the other side of the disc, A Coal Miner`s Dream, which I think I like best. I can`t find a bit of information about who this man was. His voice sounds like he may have had some singing training, possibly in the old time traveling singing schools that were popular in the south and middle America in the early half of the 1900`s. The disc was recorded in New York City at the Columbia studios instead of on location at a field recording, so that gives us no hint really where he may have came from.
One thing I do find somewhat interesting is the man`s first name on the disc, Miner. Was Miner as in coal miner? He did record a coal mining song. Of was Miner announced as minner, as in the country pronounciation of minnow, the small fish. When I was a kid, I did know an old man named Minor, which was pronounced minner like the fish mentioned here, so who knows? Anyhow... that`s about all I can guess about the man. I don`t really know anything about the songs either, so give it a download and enjoy! 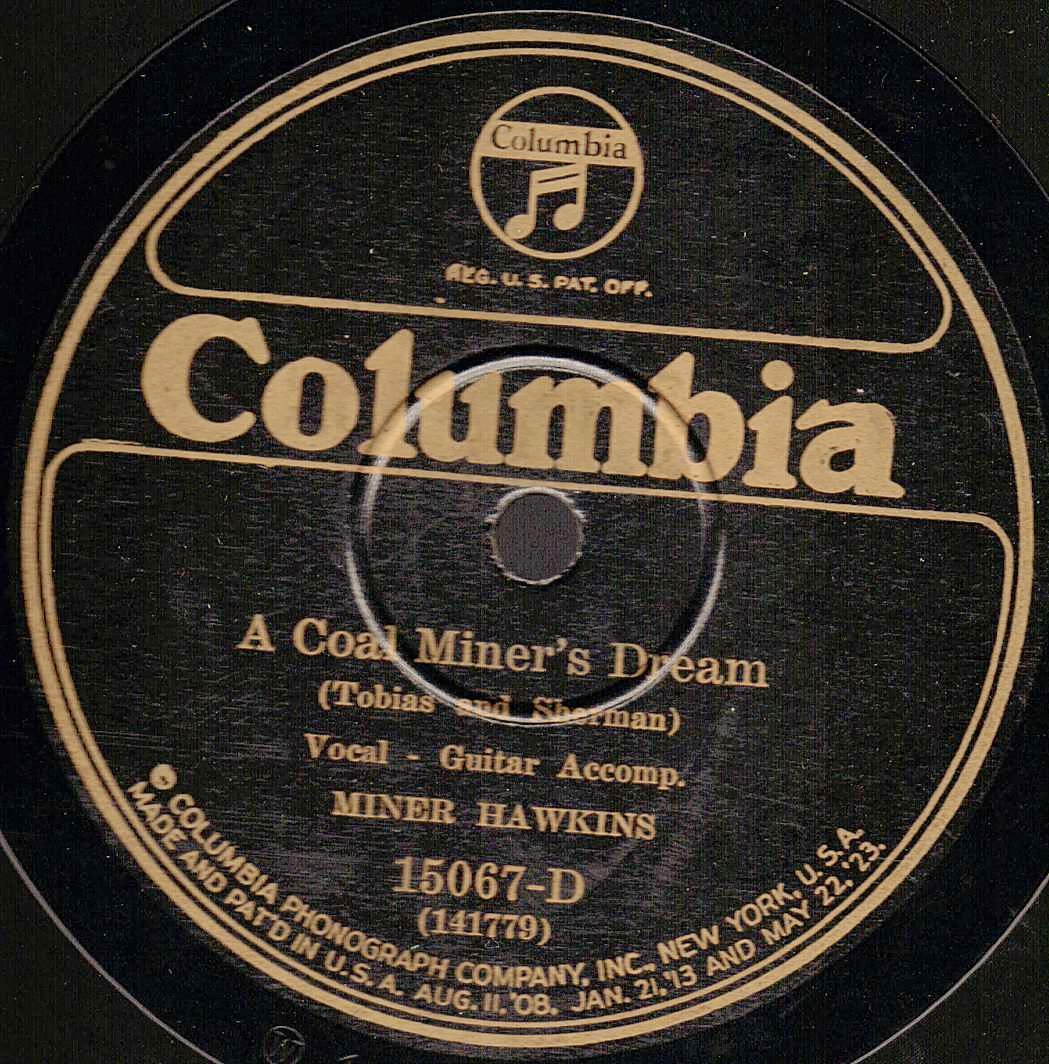 I ran across two Country Style U.S.A. 16 inch transcription discs I`d been wanting to post, so here they are. They are both in kind of rough condition, so bear with the noise and enjoy the music! 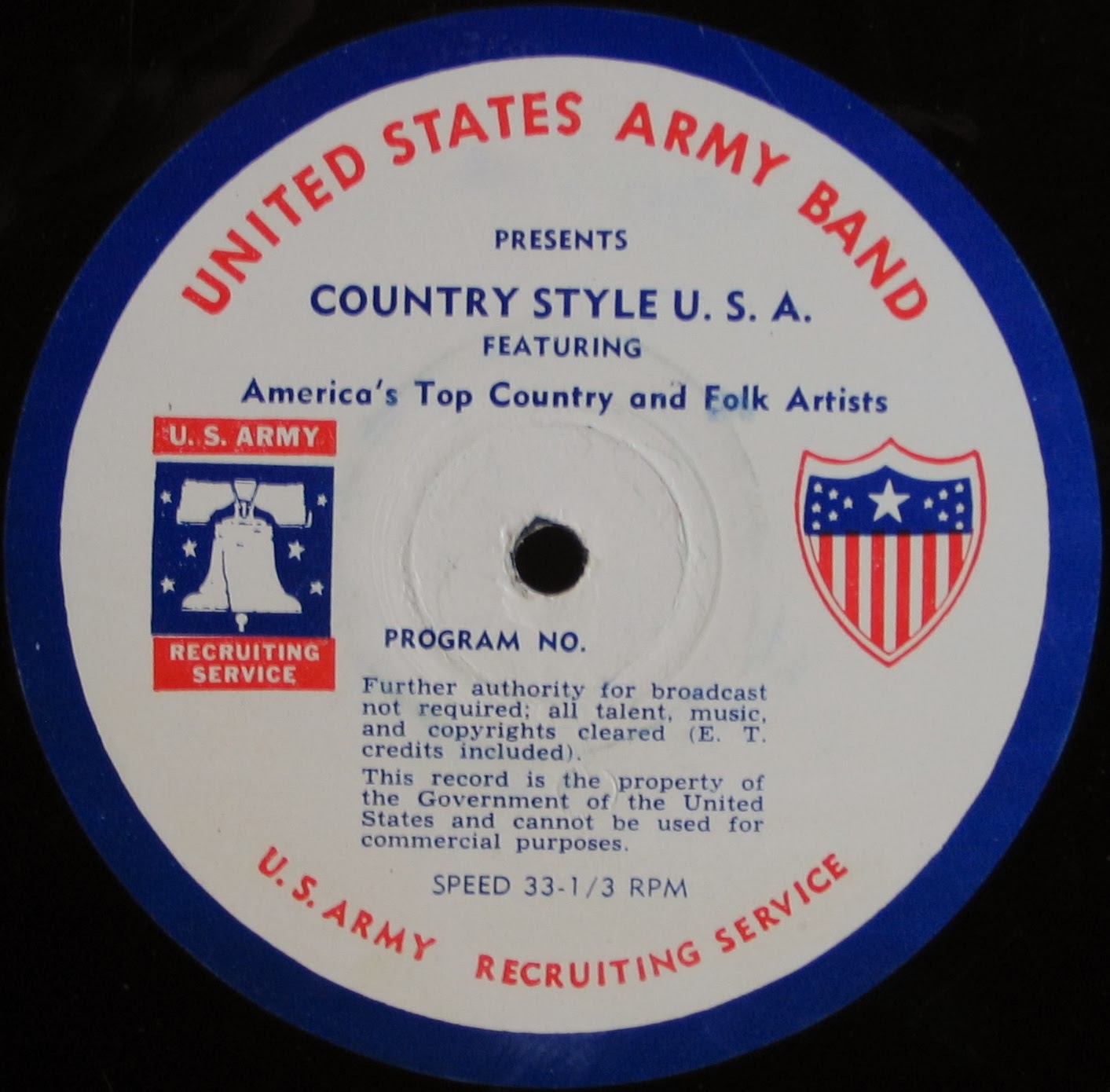 It`s been a long while since I posted a Bill Ring Show transcription, so here you go! 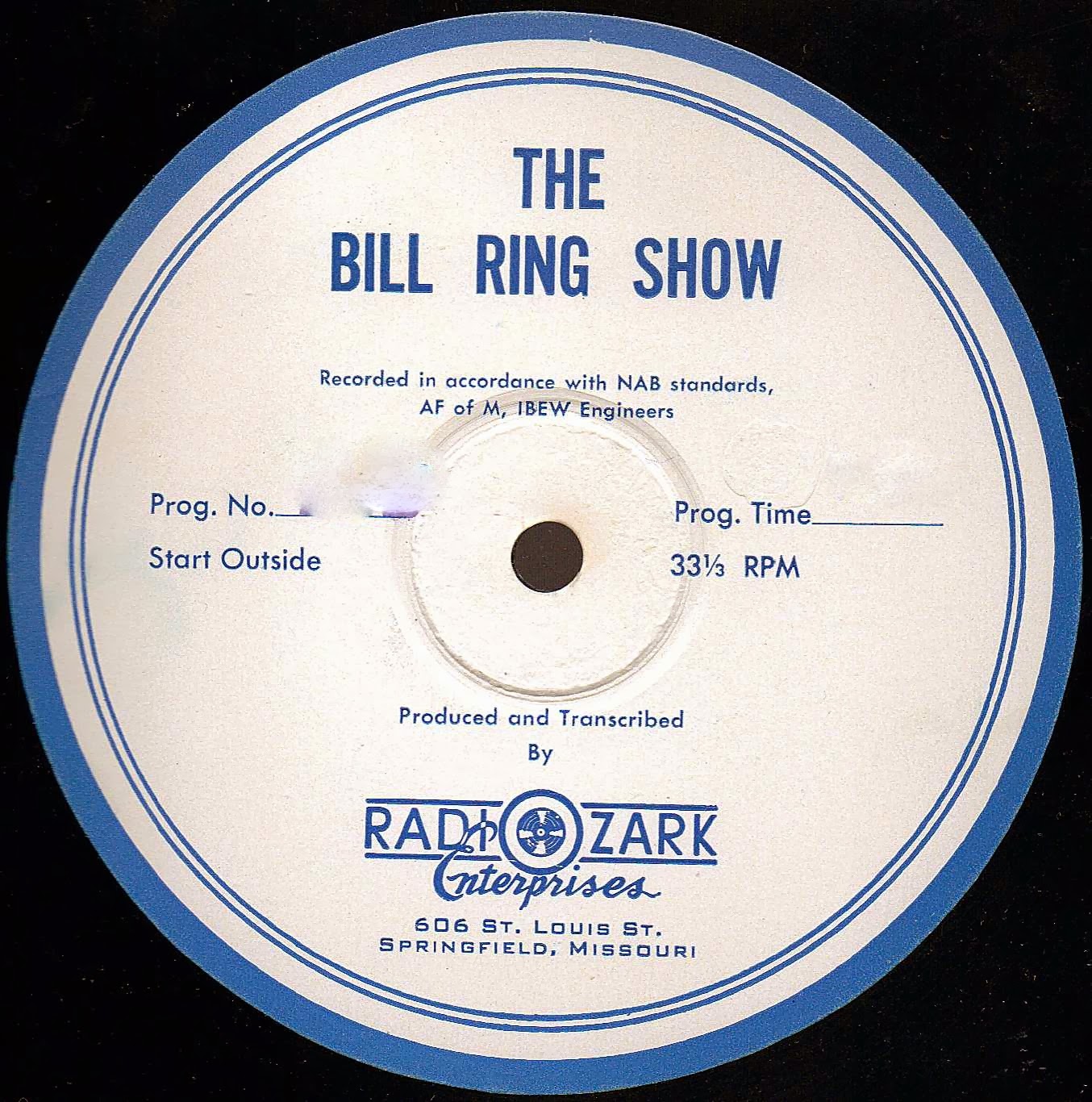 Here is a neat Roy Acuff 16 inch transcription. I`m getting close to running out of Roy Acuff material. Anyhow, this is a neat show, and I`d say pretty accurately represents what a Roy Acuff concert would have been like at the time. And as a note to the label credits, "Tab" is Lonnie "Pap" Wilson, and "Howie" is of course Howdy Forrester.
As far as the other side of this disc goes, it`s a pretty boring talk show type thing, but I wanted to include it in the download. Happy listening! 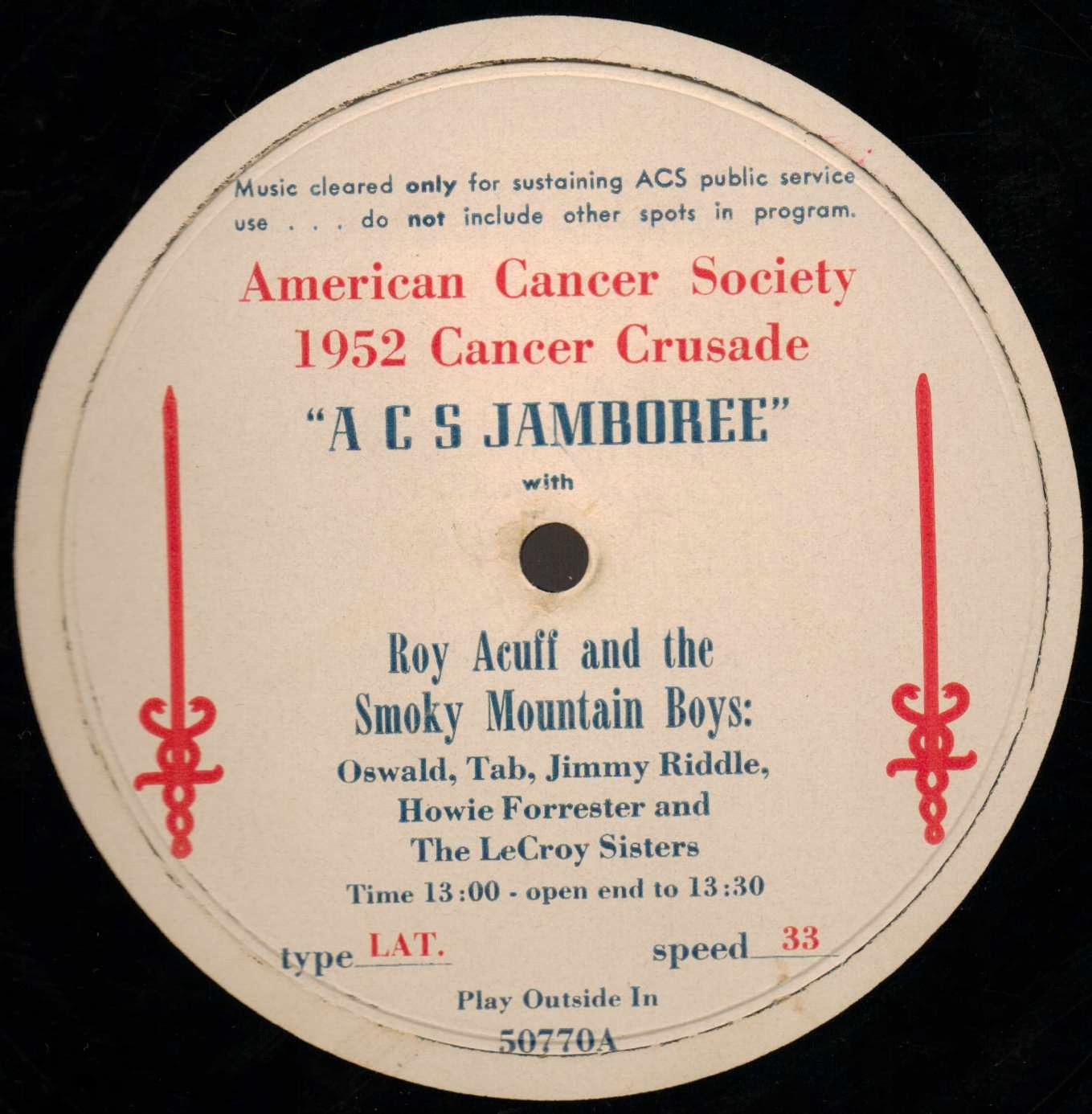 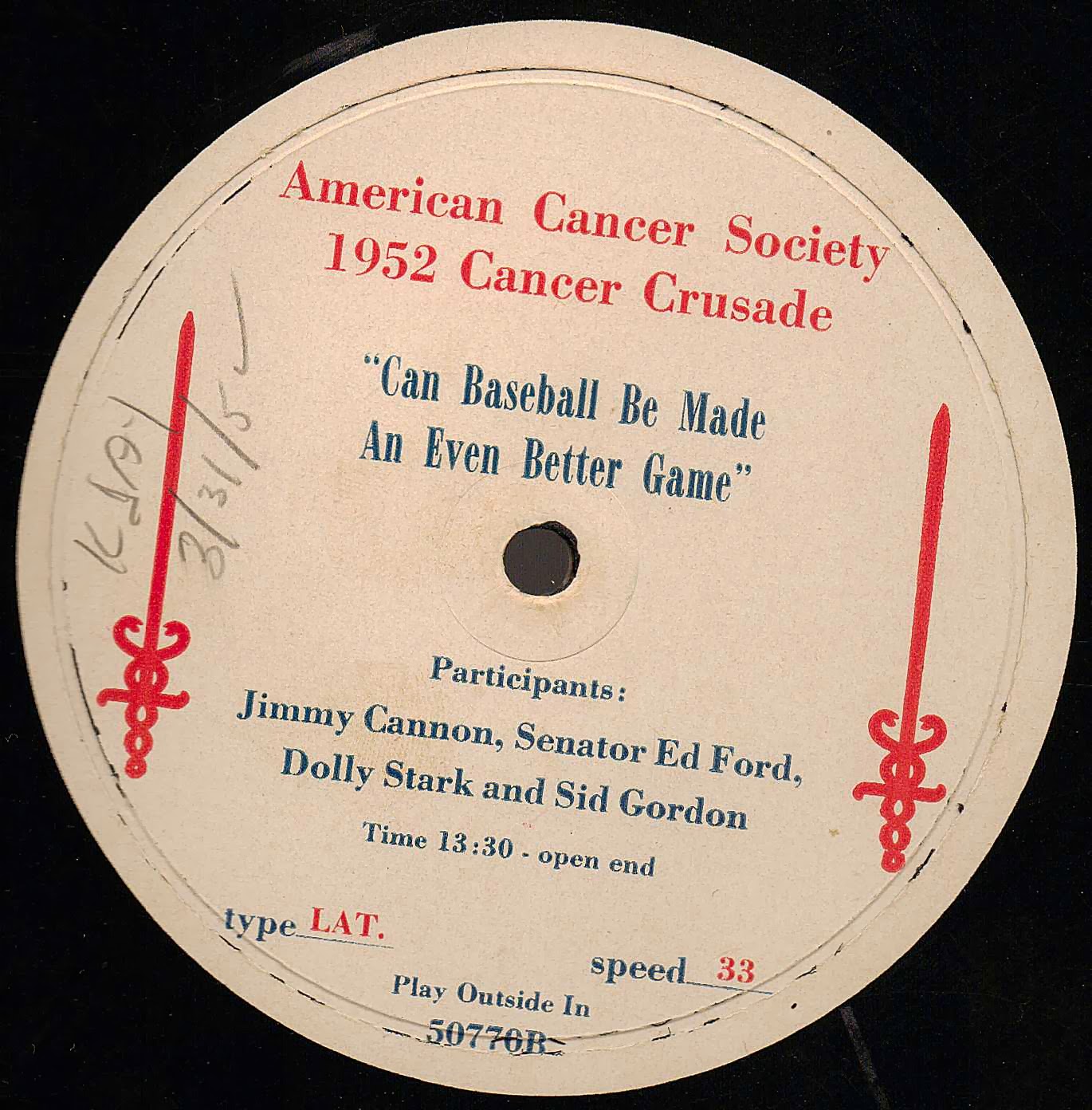 Here is the last Lonzo & Oscar LP I have, and is possibly their last record made. There were three different "Lonzos" over the years, the second Lonzo being the longest running Lonzo. The second Lonzo was Oscar`s brother in real life, and had passed away before this record was made. What we have here is no longer the funny Lonzo & Oscar type material. This is LP is pretty much straight bluegrass, which the do pretty well, but is not what a person expects to hear from Lonzo & Oscar.
Anyhow---enjoy! 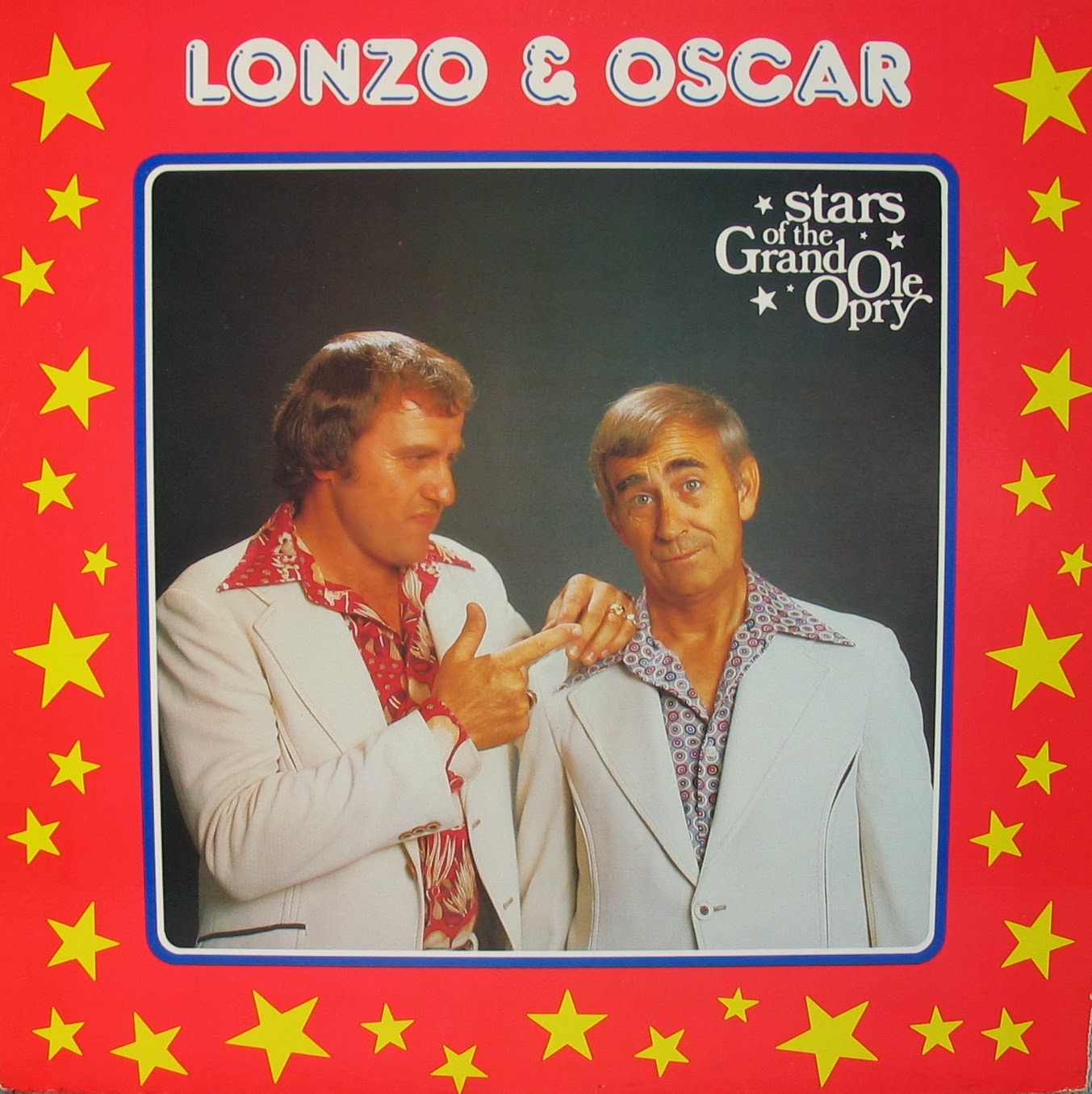 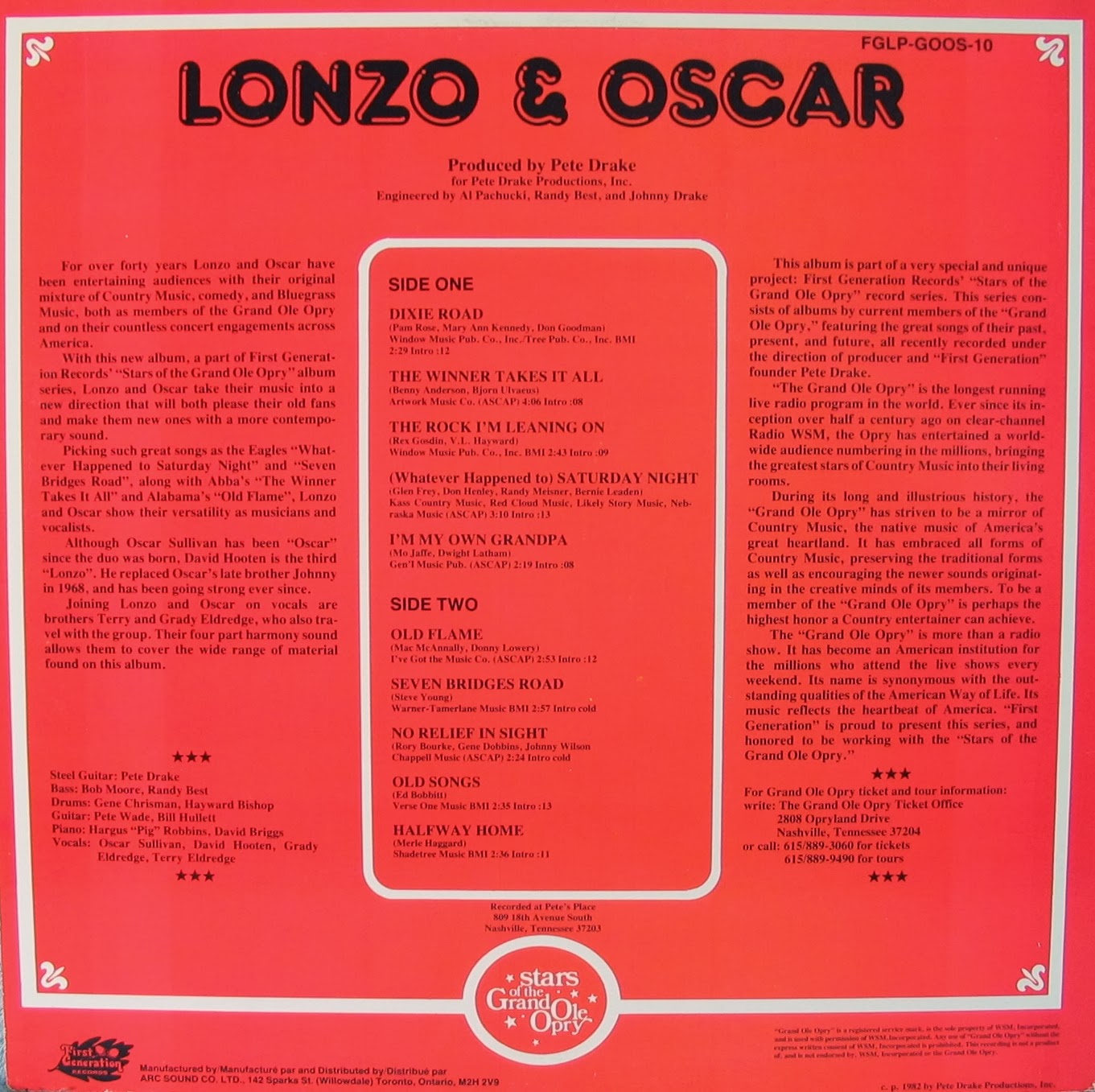 Click here to download Lonzo & Oscar - Stars Of The Grand Ole Opry
Posted by Allen`s Archive at 9:21 AM 4 comments:

I`m not going to go into anything biographical about this man, as there is information easily found on the internet. What caught my attention about this disc is the fact it says "Twin Six Guitar", so I bought it. I looked on the internet wanting to know what in the world a twin six guitar was. It was a double neck, acoustic guitar. I believe about the first double neck guitar, which is not uncommon now, in the form of a standard or a steel guitar.
I had the Broadway disc first, then found the Paramount copy of it just a week or so later. I have loaded both discs in the download file, though they are the same takes, thinking maybe one had better sound quality than the other, but I can`t really tell much difference. The Broadway label was a budget label for Paramount. Enjoy! 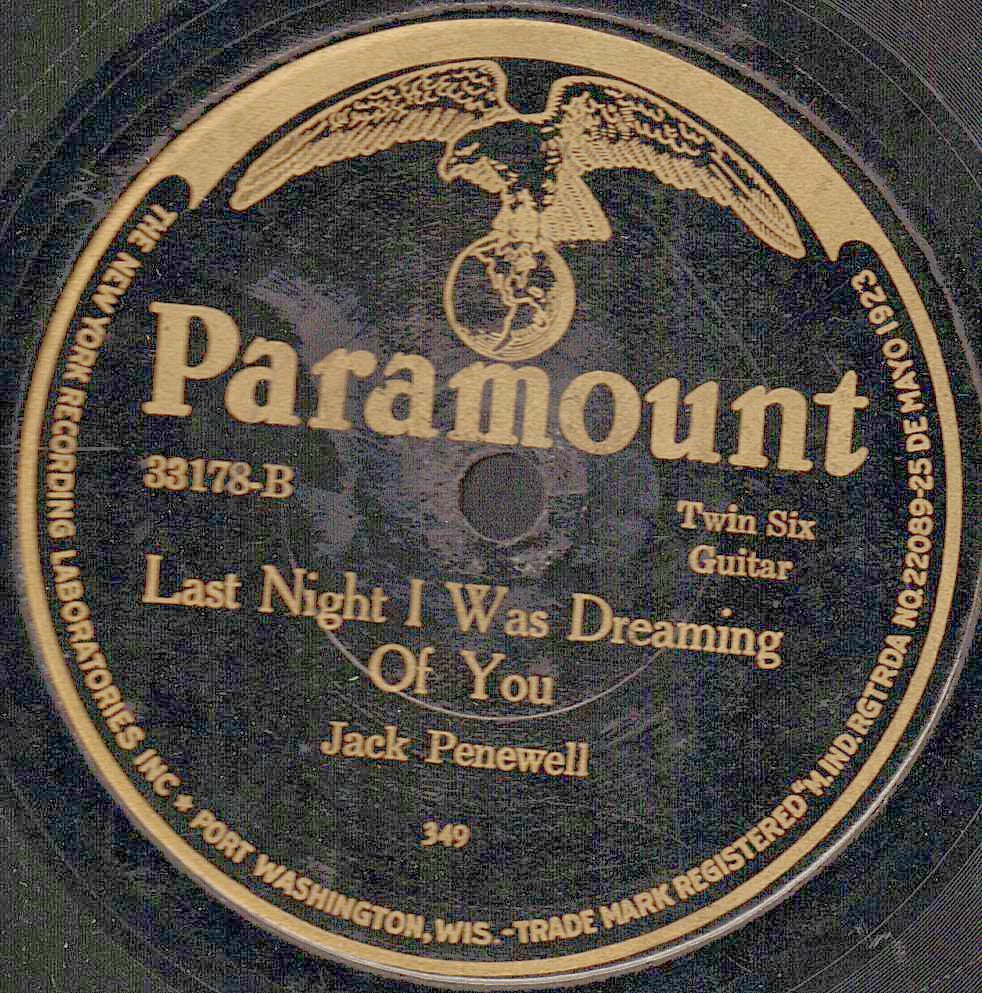 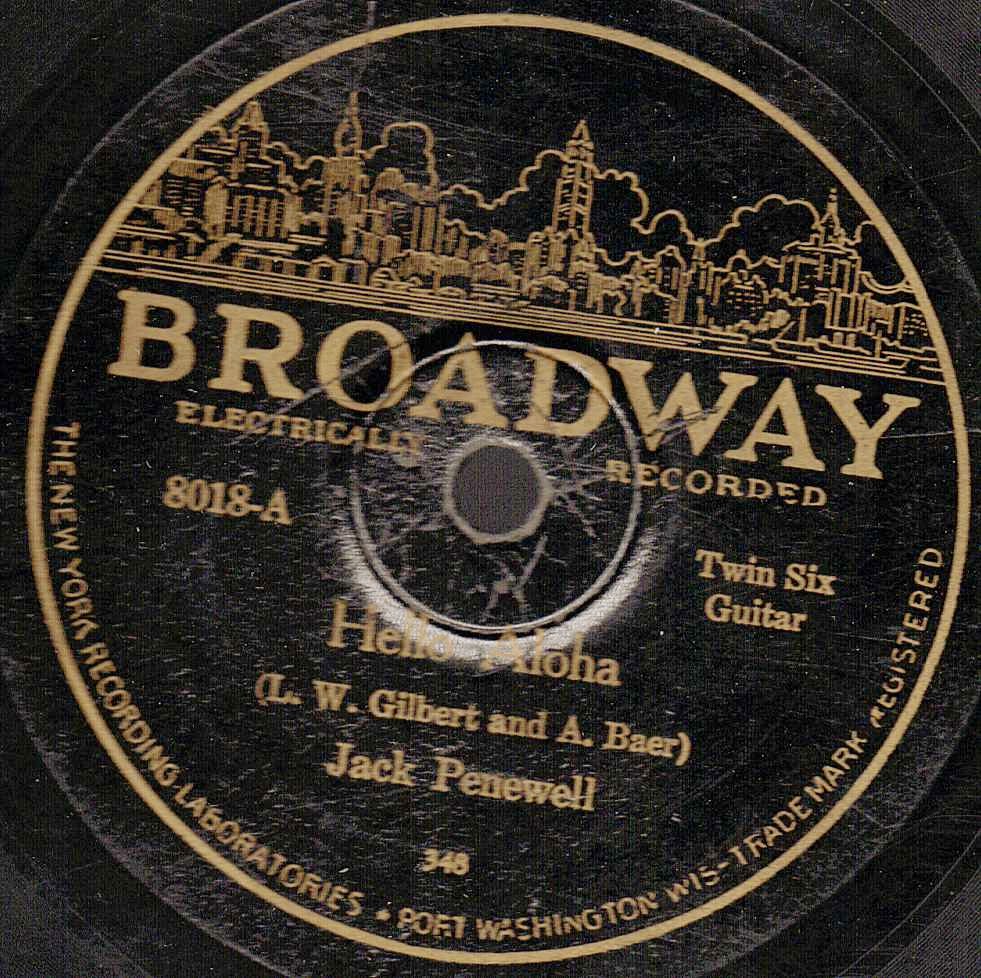 Jack Penewell / Paramount 33178/Broadway 8018
Hello Aloha / Last Night I Was Dreaming Of You
recorded in 1926?
These are both Hawaiian steel numbers

I have just transferred several 78 albums I have filed away in the archive. Someone may ask "What is a 78 album?" A 78 album is called that because the book the discs were issued in sort of resembles an old time photo album in appearance and also construction. This is also where the use of the term album comes from for an LP, due to the fact an LP has more than two tracks on it like a 78 disc did.
Anyhow---after saying that, here is the great Andy Iona with some fine Hawaiian music to cheer us up in this gloomy, cold weather we have been having here in the middle U.S.A. here lately. Also, I just wanted to say, I love the art work on the covers of some of these albums. This one is sort of Art-Deco style. It would make a neat poster! Happy downloading! 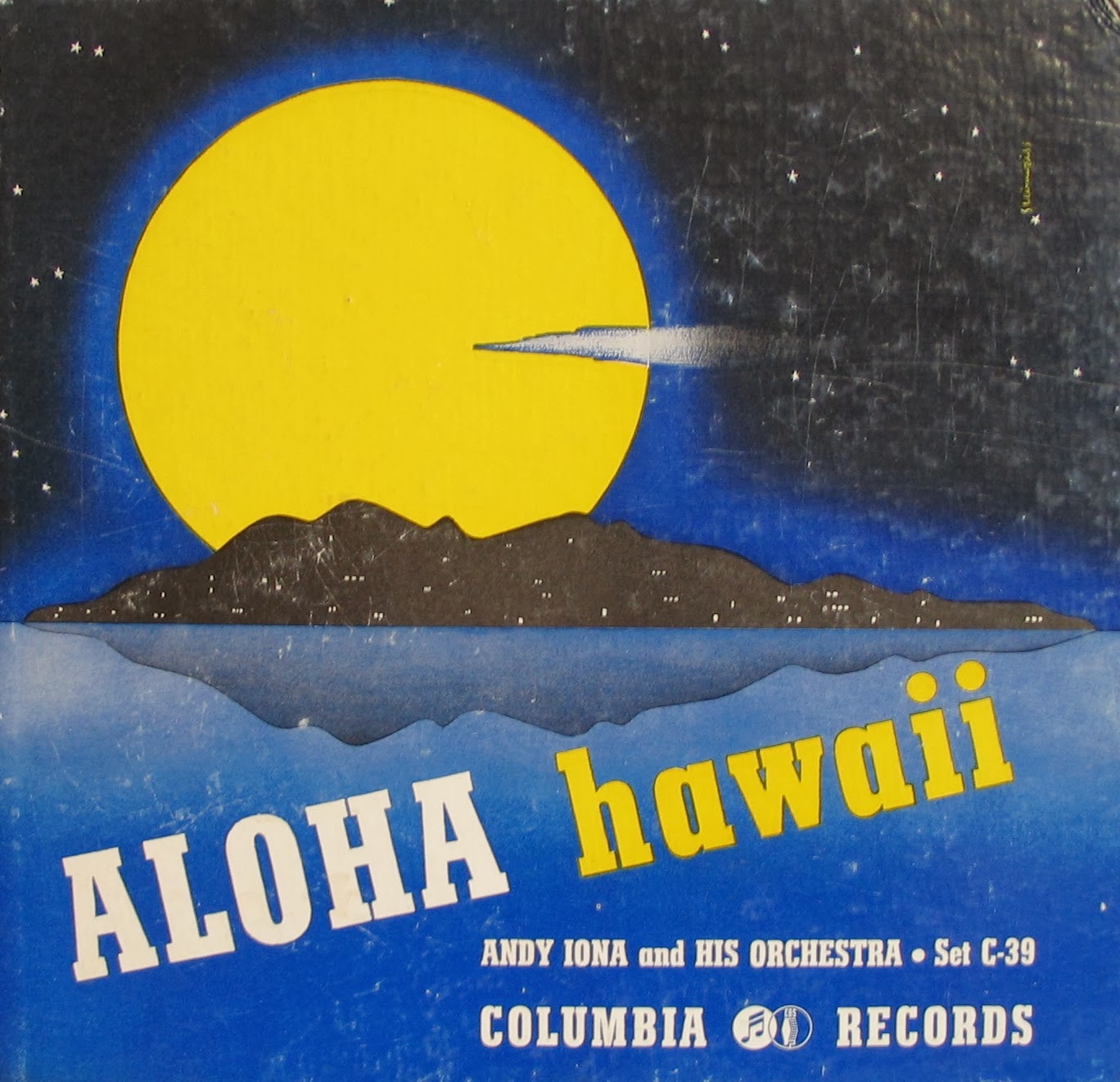 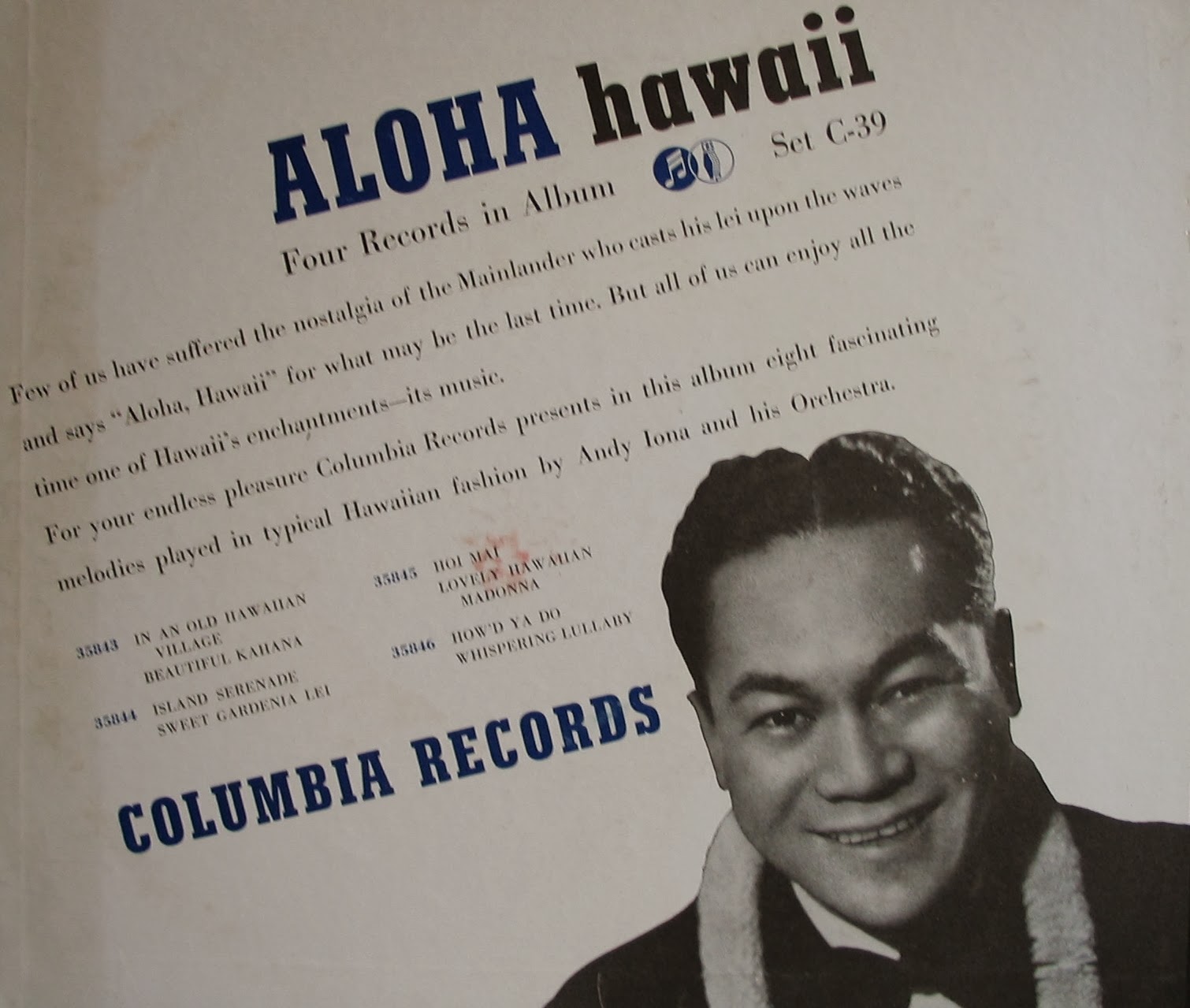 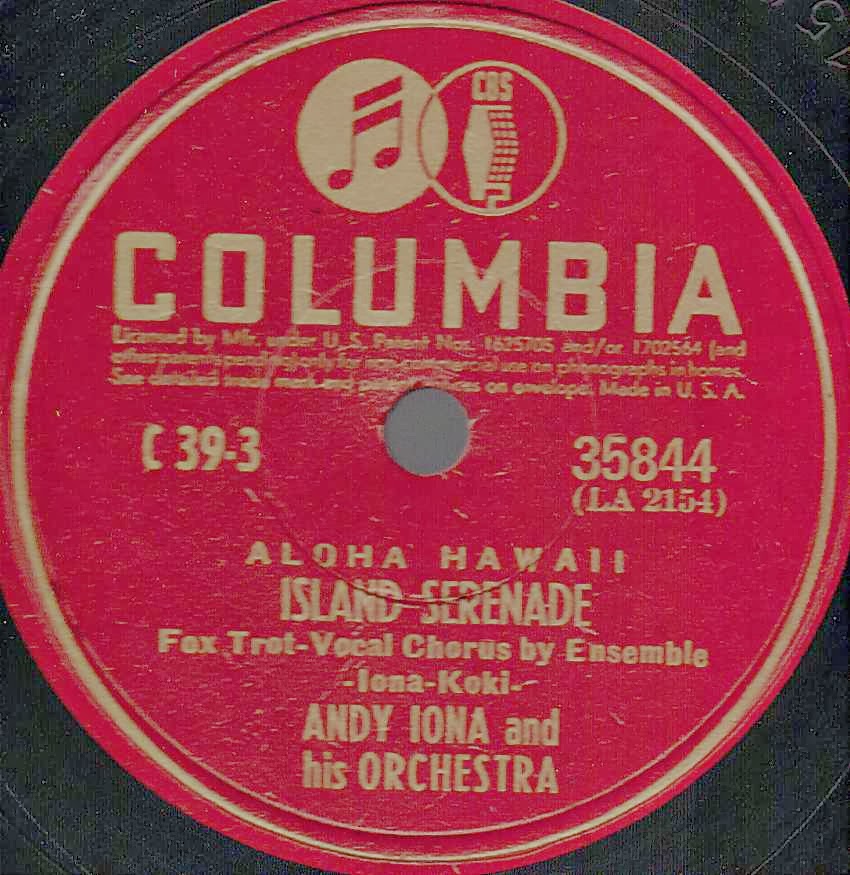 Oddly enough, I`ve had probably a half a dozen people ask if I have this obscure LP in the last three years or so. The copy I have of this is pretty trashed and I couldn`t even play side 1. All the tracks, except the last four by Unkle Willie Potts, are taken from other LP`s issued by Starday, except for the Homer & Jethro track which was on King/Audio Lab. I scrounged and dug deep into the archives and happen to find all the tracks. So, this is a put together posting of this LP, with only the Unkle Willie Potts sides actually coming from this particular disc. I have no idea who Unkle Willie Potts was or is, and his is the only name that didn`t make it on the cover. These tracks are taken from a live performance, actually sounds like they could have been from a TV show similar to Flatt & Scruggs show. Anyhow, here it is for all you fans of the archive that have asked for this. 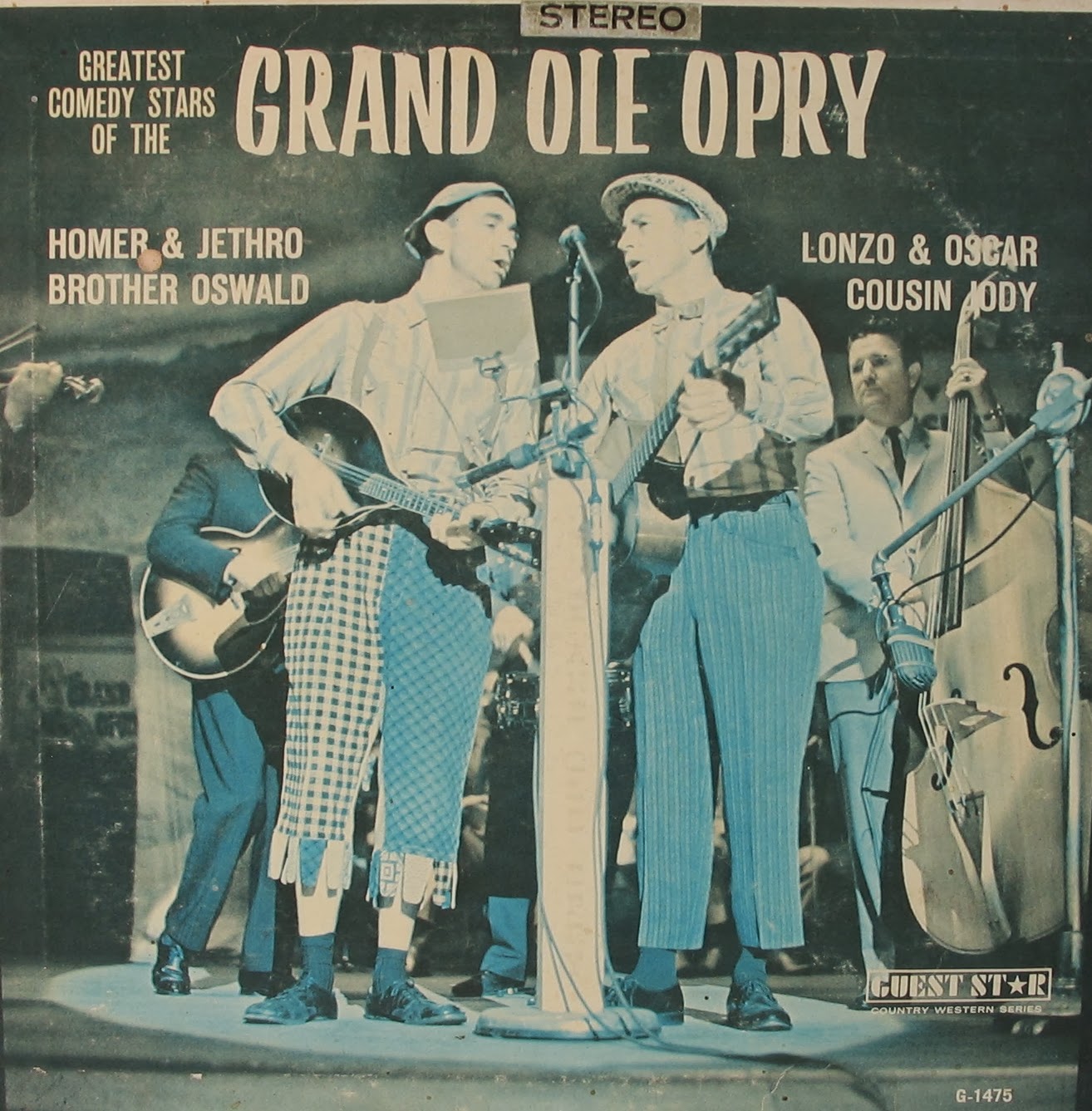 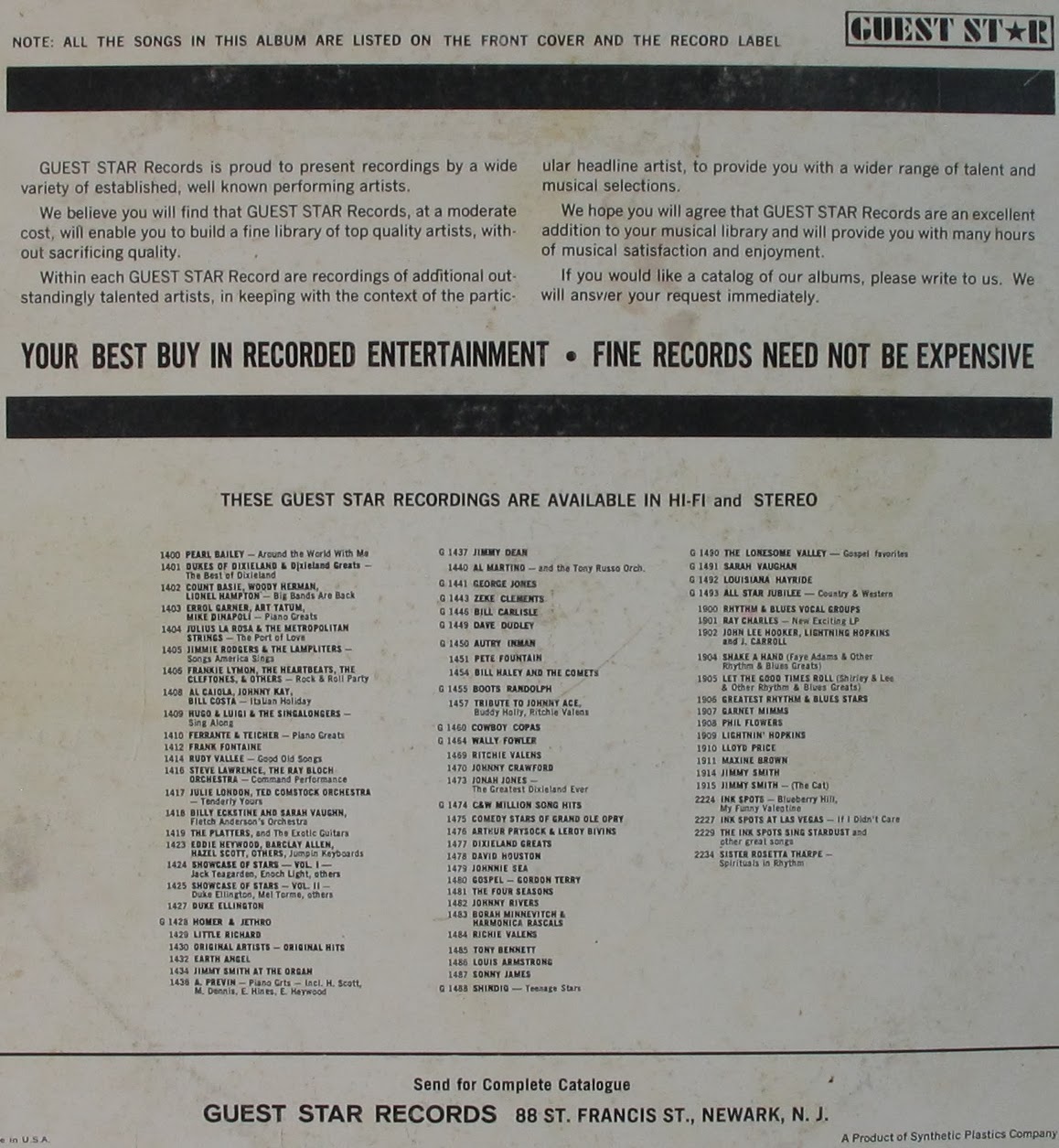 Click here to download Greatest Comedy Stars Of The Grand Ole Opry
Posted by Allen`s Archive at 9:06 AM 4 comments:

Here is a good Starday Lonzo and Oscar LP. I just have one thing to say about this LP. The song I Lost An Angel was written by Oscar about his wife, which was killed in a car wreck I believe. It`s sort of odd to hear this song on an LP of such silliness that is the stock of Lonzo & Oscar. Enjoy! 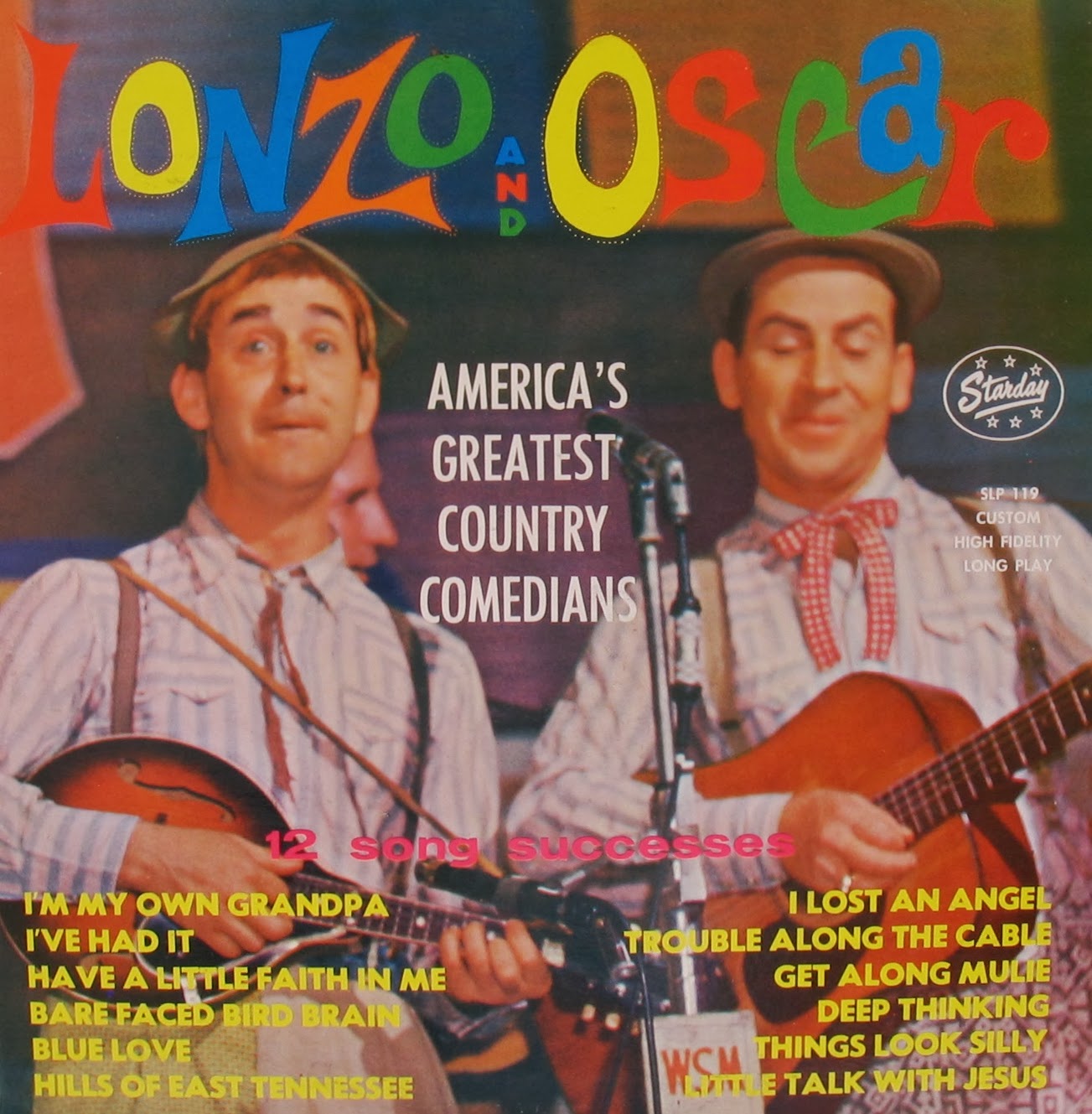 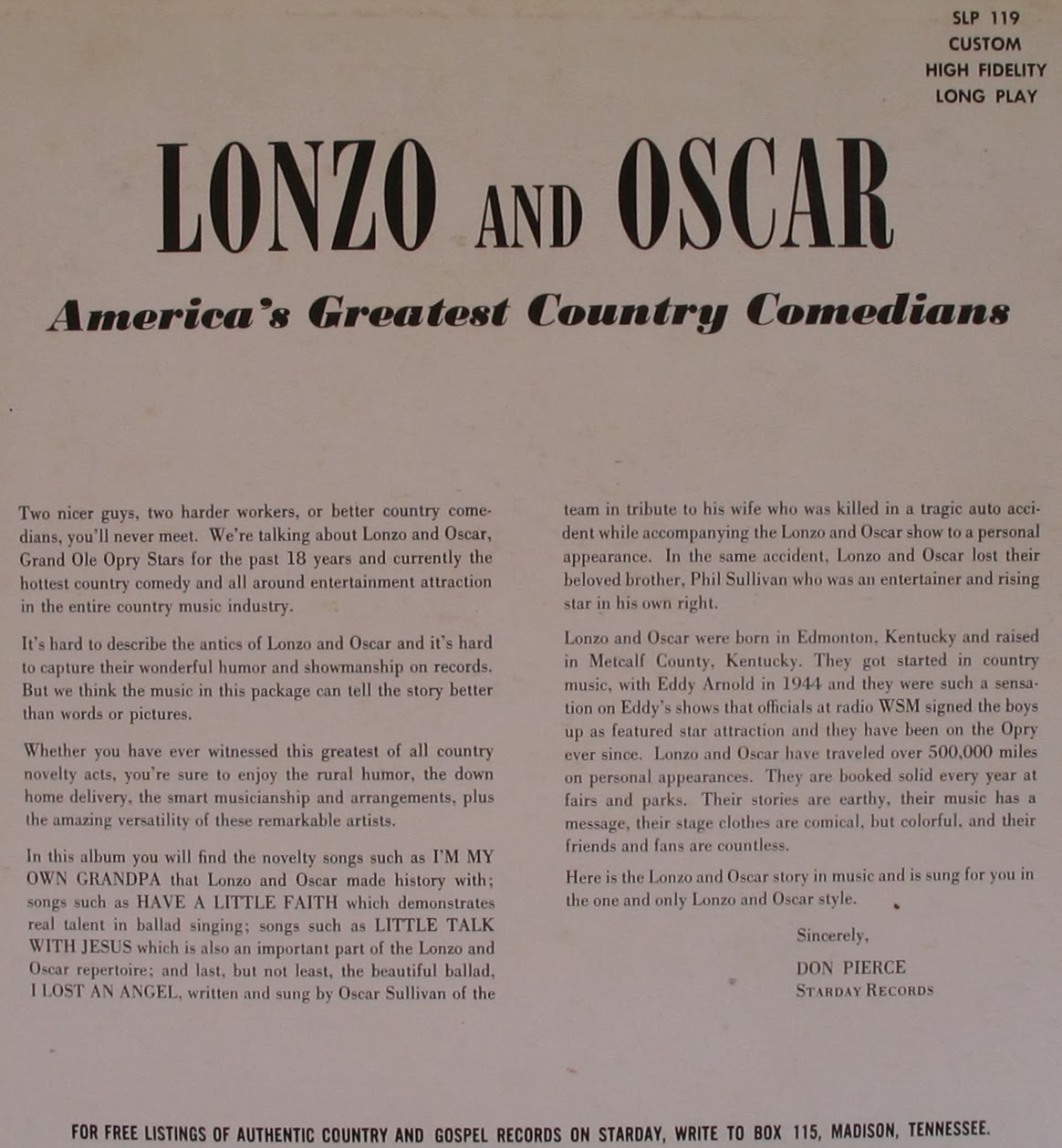