Jasper Bisbee on the Edison label 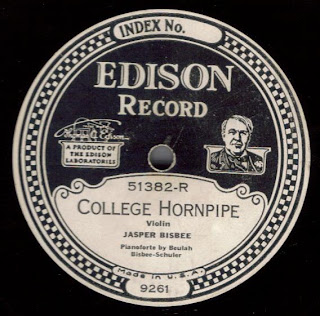 Hello folks, it`s been a while since I put any 78`s on here, so here we go!
All of these sides are old-time fiddlin`with piano accompaniment. I`m not going to go into anything on Jasper Bisbee because there is an article on him in a past issue of The Old-Time Herald magazine that is WAY better and more informative than anything I could write about him.
Click here to read Jasper Bisbee article.
It`s an extra interesting article that is very well written and tells some great stories about Mr. Bisbee meeting Henry Ford and Thomas Edison.
I`ve done about the best I could with noise reduction of these discs. The third and fourth songs are noisier than the other four songs as my record was worn pretty bad. The other four tunes turned out pretty good I think, these two discs are in near mint condition.
Happy listening!! 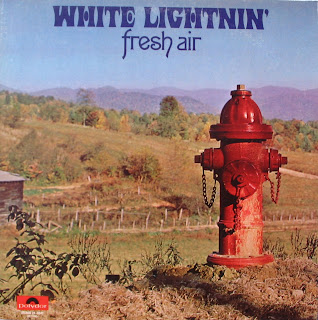 Well folks, here`s another LP by Obray Ramsey, this one is with his fiddling cousin Byard Ray. I`ve already posted another Obray Ramsey LP, so if you want to know what little information I know about Obray Ramsey, go read the other post. I don`t know any new information about him since the other post, although some people posted a little information about him in the comments on the LP.
This LP was recorded in 1970 for the Polydor label. This is a pretty unique record for an old-time banjoist & fiddler. They are playing with other musicians here, and they are sure enough not what we`d call old-time style musicians or instruments. There is electric guitar, drums & cello, pretty unusual for this type music. So, if you like Obray Ramsey, give this a listen!! 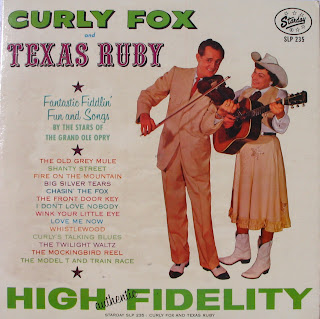 There`s some good stuff on this one. Curly Fox was a "show" fiddler (meaning he was as much a visual act as a musical act), but also was a great fiddler. He was also a good harmonica player. His harp specialty was novelty tunes such as train imitations and fox race type tunes.
Curly got started in the 30`s, working for a while with the great Clayton McMichen. I don`t really know much about his early career. He wound up on the Grand Ole Opry, performing show pieces up into at least the early 70`s.
He was even in one episode of the Andy Griffith Show. He fiddled in sort of a cameo in an episode where a "city Slicker" had came to Mayberry to collect folk songs to put out an LP. Salty Holmes was also in this episode playing a Jew`s harp. My good friend Robert Montgomery pointed this Curly Fox fact out to me.
Now I`ll tell you all what little I know about Texas Ruby. Really about all I know is that she started performing in the 30`s as sort of a yodeling cowgirl type act. I don`t know how she and Curly met, on the road likely. The were married, but I don`t know when, early 40`s I`d guess. In contrast to Curly`s music, which trended towards old-time type stuff played in a hot style what might be called pre-bluegrass, Ruby`s music was western swing, pop like.
I will mention that Ruby died in a fire of their home one Saturday night in the 60`s while Curly was at the Opry performing. Here is a paragraph written about this terrible accident on the back of the LP cover----"Note: Less than 72 hours after these notes were written, Texas Ruby perished in a fire at Nashville while Curly Fox was performing on the Opry. Miss Texas Ruby was Mrs. Curly Fox in private life. Starday joins with country music fans everywhere in mourning the loss of this fine artist." So, I`d say her songs on this LP is the very last recordings Texas Ruby made. Hope you like this LP!! 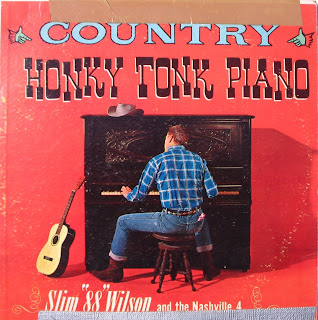 Hello folks! Here`s a good LP if you like old honky tonk type piano.
I know, nor could find, absolutely nothing about this guy. This is an old LP of my mom`s, we used to listen to it all the time when I was a kid. I did find on the internet that this LP was issued in 1964. My mom has long been a fan of honky tonk, barrel house and ragtime piano. Give it a listen and enjoy it!! 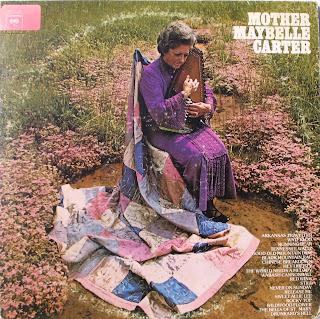 Although this 2 disc LP is self titled, I give it the name Jam Session with Maybelle because that`s what it is, a jam session.
I`m not going to go into any history of Mother Maybelle, because it`s plenty easy to find information on the internet about her and all the other Carter Family folks.
So----I`ll just say a little bit about this LP---
As I said, it`s pretty much a jam session with Maybelle. I`ve heard other LP`s that were supposed to be spontaneous jam sessions with the artist, but this is the best one I`ve heard as far as it sounding like a genuine jam session. The people with Maybelle just talk with her and ask some questions about the old days and then Maybelle of someone else cooks up the idea of playing a certain number and then they`re off!! There are some flubs on some songs and such as that, making this LP feel like you`re really there at the jam with Maybelle.
That`s enough talk about this LP---just give it a listen for yourself!!