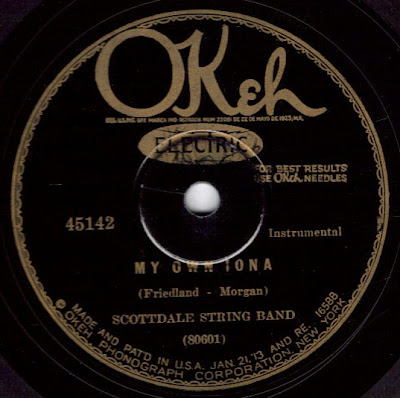 My Own Iona/Carolina Glide - OKeh 45142
Scottdale String Band - recorded March 21, 1927
A unique string band with mandolin as the lead instrument. My Own Iona is a song in the vein of Red Wing, Snow Deer or Silver Bell, although Iona is a native Hawaiian girl rather than an Indian. 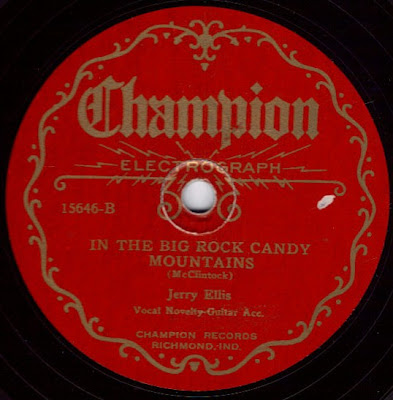 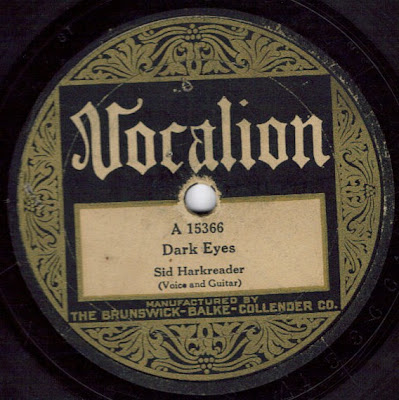 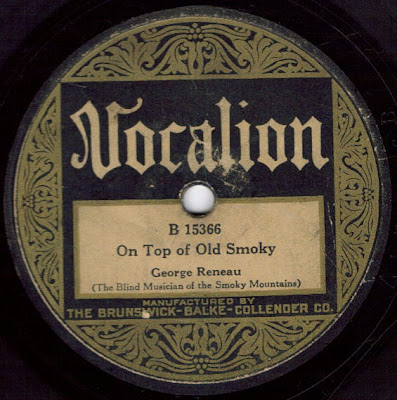 Dark Eyes/On Top Of Old Smoky - Vocalion 15366
Sid Harkreader/George Reneau - recorded April 13, 1925/Oct. 15, 1925
Dark Eyes is a longing love song, On Top Of Old Smoky is a unique version of this song sang to a tune I`ve never heard it sung to before. I don`t know why sometimes record companys put a different artist on each side of a 78. How did they work royalties on these records I wonder. 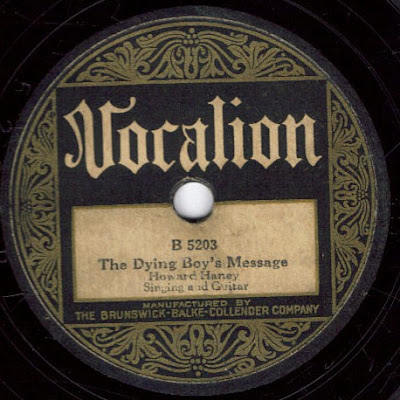 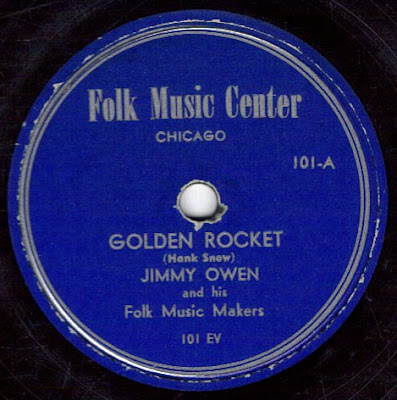 Golden Rocket/Shotgun Boogie - Folk Music Center 101
Jimmy Owen - likely recorded about 1950-ish
Who was Jimmy Owen?? I`d never heard of him. Pretty good record of two songs that would have been very popular at the time this record was cut. 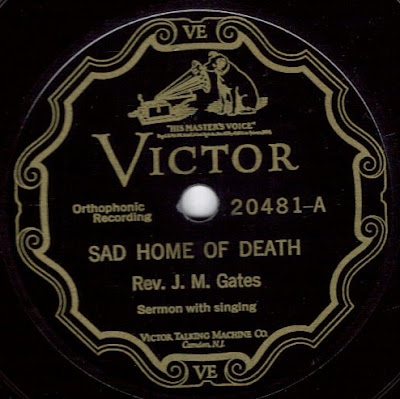 Sad Home Of Death/You`ve Got To Lay Down And Die Someday - Victor 20481
Rev. J.M. Gates - recording date unknown to me, likely about 1927
This is the first sermon type record I`ve had. Rev. Gates recorded many sides for more than one label. Pretty interesting record, to me at least. 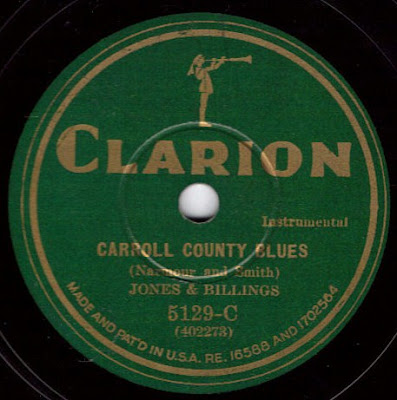 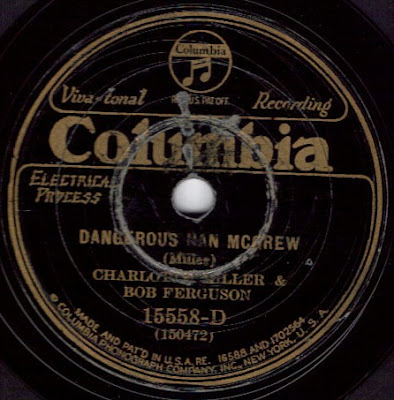 Poker Alice/Dangerous Nan McGrew - Columbia 15558-D
Charlotte Miller & Bob Ferguson - recorded April 16, 1930
I know nothing about these artists. Both songs are what is sometimes called "city-billy" songs, an attempt of professional (or semi-professional) songwriters trying to write a hillbilly or old-time song. Dangerous Nan McGrew was originally Dan instead of Nan, this is sort of a re-write to be sang as a woman. 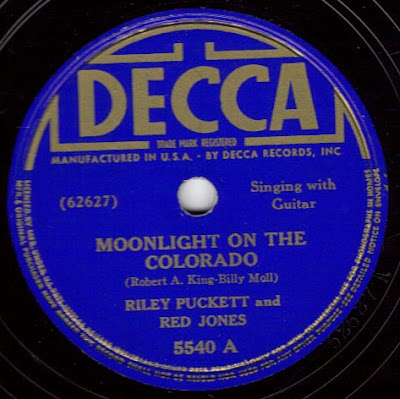 Moonlight On The Colorado/The Broken Engagement - Decca 5540
Riley Puckett & Red Jones - recorded Sept. 28 & 29, 1937
Two old pop type numbers done up in Riley Puckett country fashion. Who was Red Jones?? On the first few sessions Roy Acuff recorded in the mid 30`s there was a Red Jones in his band at the time they were called The Crazy Tennesseeans, could he be the same Red Jones I`ve always wondered?? 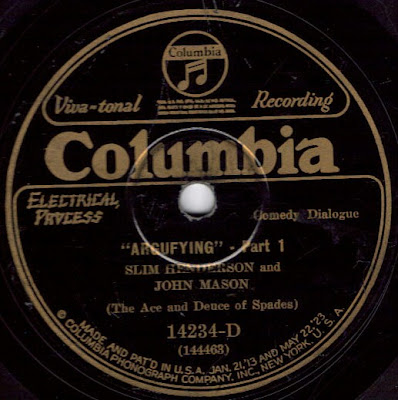 "Argufying" Part 1&2 - Columbia 14234-D
Slim Henderson & John Mason - recording date unknown to me, likely 1927-ish
What we have here is a minstrel type skit. I`m guessing this is the only record they made. It just isn`t very funny, not as funny as Sam & Henry (aka Amos & Andy) or The Two Black Crows were. 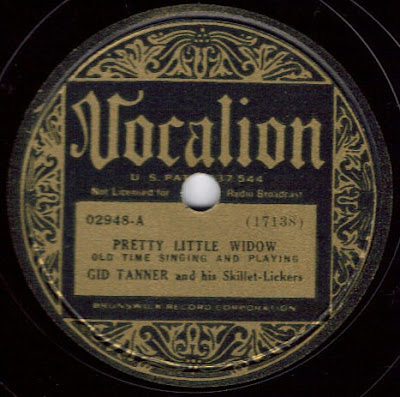 Pretty Little Widow/Liberty - Vocalion 02948
Gid Tanner & His Skillet Lickers - recorded Oct. 22 & 23, 1928 (from Columbia masters)
What`s up with this being on the Vocalion label?? Apparently sometimes labels would lease masters from another company when the original company had quit issuing songs. I`m guessing Vocalion issued this possibly in the 1930`s, the label is just gold and black, earlier they were gold, black and white.
These may also be alternate takes than what was issued on Columbia. At the end of Liberty on the Columbia record, Lowe Stokes says "scat" at the end of the song and the word "scat" is absent here.
Something interesting about the tunes---Pretty Little Widow is the same tune as Sugarfoot Rag. Clayton McMichen claimed his dad wrote this tune and seems to have tried to sue over it. It had not been copywrited by his dad unfortunately, and the case either was lost or dismissed.
This Liberty tune is one of my favorte fiddle tunes. It is a different song than the fiddle tune we call Liberty now. Most people call this song Liberty Off The Corn Licker Still, which is really wrong. Clayton McMichen introduces the song as "We`re gonna play the tune you all been askin` for, Liberty - off the corn licker still" Meaning this tune was on one of the Corn Licker Still In Georgia skit records where they just played snippets of tunes during the skit. All the old 1920`s recordings of the tune Liberty is this song, not the song we call Liberty today, which the second part of is from the tune Soldier`s Joy. I don`t know where this "new" Liberty came from and don`t know when the "new" version was first recorded. I like this Liberty much better than the "new" one! 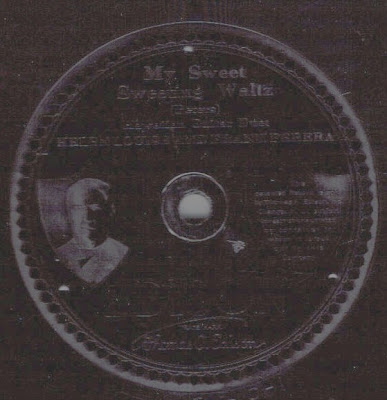 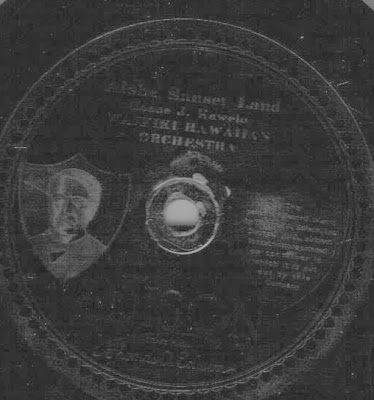 My Sweet Sweeting Waltz/Aloha Sunset Land - Edison (no catalog number on the label)
Helen Louise & Frank Ferera/Waikiki Hawaiian Orchestra - recording date unknown to me, could be from about 1913-ish up till maybe 1920-ish
I love the old steel guitar like played on these two instrumentals. Likely Helen Louise or Frank Ferera is playing on the Waikiki Hawaiian Orchestra side also.
This disc was in sort of rough shape around the edges and is fairly noisy for an Edison disc for about the first minuet on both sides. 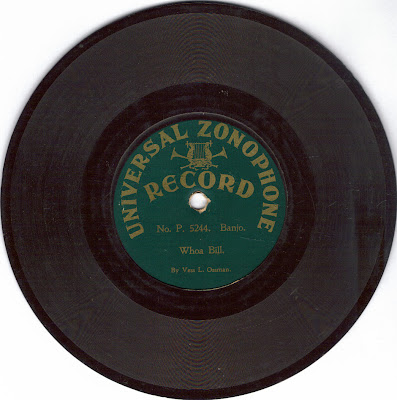 Whoa Bill - Universal Zonophone No. P. 5244.
Vess L. Ossman - recording date could be anywhere from the late 1890`s till maybe around 1910 - this is a seven inch diameter disc
Here`s a neat early disc record. The record is actually dark brown in color, but looks black in the scan. It`s a fairly noisy record (although it`s in pretty decent condition) as most earlier records usually are.