What ever happened to the Pickard Family!!?? 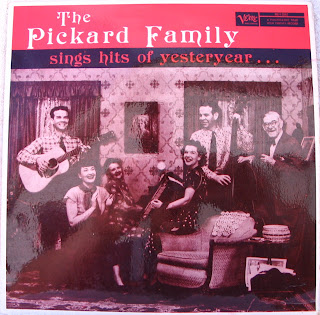 Since I`ve been a little slow about posting lately, I thought I`d post one more for the New Year today.
Here is an "extry odd" LP for sure. The Pickard Family was a pretty popular family group in the late 20`s and early 30`s. They got their start on WSM on the Grand Ole Opry in about 1927. Seems the story goes that one of their children turned up missing and they pleaded to radio stations to broadcast this unfortunate fact in hopes of finding the missing child, which they did find. Sounds like a happy ending, but the story just gets better. Seems the Solemn Old Judge, George D. Hay (inventor & manager of the Grand Ole Opry at the time) got to know them some through the missing child episode and learned that they were musically inclined. So, he seems to have auditioned them and next thing you know the Pickard Family were on their way to the "big time".
Now when I say big time, I don`t mean they became Opry stars and lived happily ever after. Actually, and unfortunately, the Pickard family is rarely mentioned in Grand Ole Opry history books. They stayed with the Opry awhile, then moved to WLS in Chicago to be stars on the National Barndance. They also recorded records in the late 20`s, including a Jew`s harp solo 78 for Columbia that is still considered the apex of Jew`s harp artistry!
The story gets just a little better for them yet. Seems soon after War World 2 they wound up in California on radio and wound up having their own TV show! I have looked for any clips from their show and have had no luck finding anything yet. So if anyone has any of this material I`d love to see it!!
This LP is sort of strange. Their original recordings were mostly old pop songs done in an old-time country style, but on here they sound more folk-ish than old-time. Obed "Dad" Pickard died soon after this was recorded, although by my ear "Dad" nor "Mom" Pickard are even on the record. Maybe they were not able to perform anymore due to age. I believe that this was recorded arount the mid to late 50`s. Mom & Dad Pickard would have been in their late 70`s I believe.
Maybe I`ll post some of my Pickard Family 78`s sometime. Hope you all enjoy this ultra-rare, unusual record!! 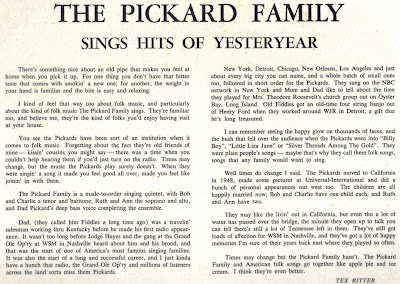