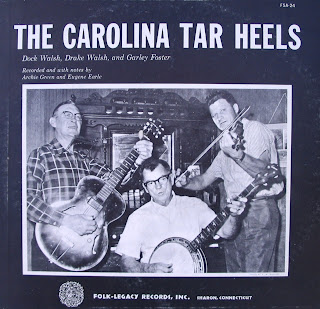 Here`s a great LP-----period. The Carolina Tar Heels were originally a group in the late 20`s. Here is a "re-discovery" of an artist from the 20`s, Dock Walsh being the core of this group. Originally the other two members of the group were Clarence "Tom" Ashley, who was also a re-discovered artist in the late 50`s or early 60`s, and Gwen Foster, who was a good harmonica player and somewhat of a country guitar virtuoso of the 20`s. The liner notes I`m including tells a short story of the original group and the group on this record also. Likely the most fascinating thing on this LP is Dock`s slide banjo. It`s sort of a haunting sound to me. Dock Walsh is sort of an overlooked artist I think. Although Dock had recorded in the 20`s with this group, he had recorded in 1925 & 1926 solo for Columbia and these are great sides. Listen to them if you get the chance. I may post them someday. Hope you all enjoy this one.