Here are the next two LP`s in this J.E. Mainer series. 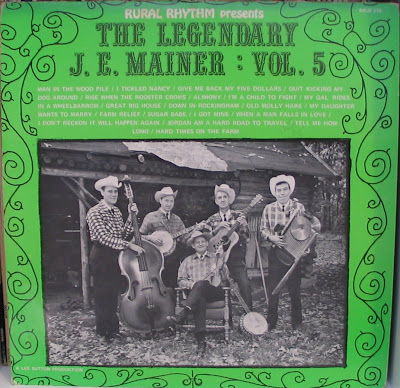 1. Man In The Wood Pile (likely from the Skillet Lickers record of Nigger In The Wood Pile, the tune is known as an instrumental by the titles Stoney Point & Wild Horses among a few others))
2. I Tickled Nancy (the old Uncle Dave Macon song)
3. Give Me Back My Five Dollars (another Uncle Dave Macon number)
4. Quit Kicking My Dog Around (another Skillet Licker tune)
5. Rise When The Rooster Crows (may have came from the Binkley Brothers record, they were an early outfit on the Grand Ole Opry)
6. Alimony (no idea where this comes from, sounds like something that may have been a novelty number from the 40`s or so)
7. I`m A Child To Fight (yet another Uncle Dave Macon tune)
8. My Gal Rides In A Wheelbarrow (a version of Uncle Dave Macon`s parody 78 of Listen To The Mocking Bird)
9. Great Big House (a version of The Old Grey Mare, sort of similar to the Skillet Licker`s record)
10. Down In Rockingham (a slower version of Earl Johnson`s 78)
11. Old Molly Hare (seems similar to the Skillet Lickers record)
12. My Daughter Wants To Marry (likely from the Uncle Dave Macon 78)
13. Farm Relief (another tune from the Uncle Dave Macon catalog)
14. Sugar Babe (not familiar to me, same tune as Fiddlin` John Carson`s It`s A Shame To Whip Your Wife On Sunday)
15. I Got Mine (likely from Fiddlin` John Carson or maybe the Skillet Licker`s 78)
16. When A Man Falls In Love (taken from Uncle Dave Macon`s Kissin` On The Sly)
17. I Don`t Reckon It`ll Happen Again (joke is likely from the old Charley Chase comedy record of about 1905-ish, song sounds similar to the Binkley Brothers 78 to me, but was a common tune of the 20`s)
18. Jordan Am A Hard Road To Travel - (maybe from the Riley Puckett 78)
19. Tell Me How Long (a version of Hesitation Blues, done by Charlie Poole as If The River Was Whiskey - Hesitation Blues was a very common tune to old-time music and blues pickers)
20. Hard Times On The Farm (from Gid Tanner`s 78 of Down On Tanner`s Farm) 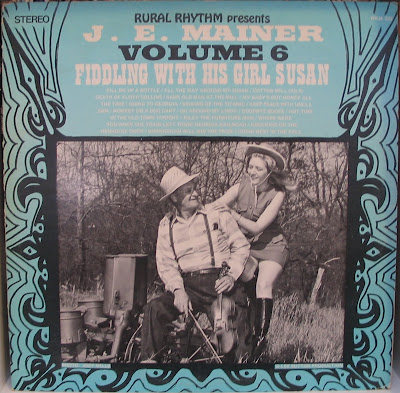 1. Fill Me Up A Bottle (there is a 78 from the 20`s with this number on it, but I can`t seem to find who`s it was or the correct title they used)
2. All The Way Around My Susan (no idea where this comes from, I never heard it anywhere else)
3. Cotton Mill Colic (likely from the Dave McCarn 78)
4. Death Of Floyd Collins (a HUGE hit of a real event, written by Blind Andy Jenkins and recorded By Vernon Dalhart to great success)
5. Same Old Man At The Mill (I`ve heard this by The New Lost City Ramblers, no idea where J.E. may have got it)
6. My Baby`s Got Money All The Time (likely taken from Charlie Poole`s 78 of If I Lose, Let Me Lose)
7. Going To Georgia (probably from the Skillet Lickers 78)
8. Sinking Of The Titanic (written & recorded by Ernest "Pop" Stoneman, Vernon Dalhart also had a huge hit with it, a very popular song about 1925)
9. Keep Peace With Uncle Sam (there is a Charlie Oaks 78 titled The Kaiser & Uncle Sam, but I`ve never heard it, so I don`t know if they are related tunes)
10. Monkey On A Dog Cart (I`ve heard a similar tune, but can`t recall the title)
11. Do Around My Lindy (from an old Fiddlin` John Carson 78)
12. Good-Bye Booze (likely inspired by the Charle Poole 78, or possibly he may have had the Gid Tanner & Fate Norris 78, it was the same song but a much more comical version)
13. Baptized Sister Lucy Lee ( a great Lew Childre tune)
14. Hot Time In The Old Town Tonight (an old pop tune from the teens, likely J.E. got it from the Skillet Lickers 78)
15. Riley, The Furniture Man (likely from the old Cofer Brothers 78)
16. Where Were You When The Train Left Town (might be from the old Frank Hutchison 78)
17. Georgia Railroad (likely from the Gid Tanner & Riley Puckett 78, Fiddlin` John Carson done it as Peter Went A` Fishin`, surely a very old Georgia tune)
18. Knocking On The Hen House Door (surely from the old Dock Walsh 78)
19. Birminghan Will Win The Prize (this seems to be sort of a unique number to J.E., seems related to Darby & Tarlton`s 78 of Birmingham Town)
20. Going West In The Fall (not sure where this may have came from)