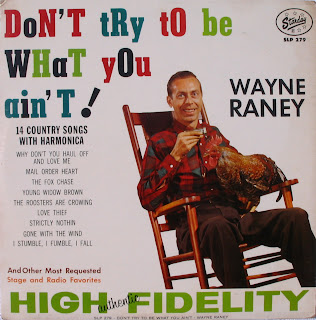 Hello everyone!! Now if you was peepin` through a knothole to see this album cover and all you could see was the dominecker rooster, you`d know right quick this is gonna be a pretty hardcore country record!!
I don`t really know a whole lot about Wayne, but I`ll tell what I can. Wayne Raney was originally (according to the LP cover) from Wolf Bayou in north central Arkansas. He learned to play harmonica as a boy.
Apparently in his mid teens he got on the radio. Somewhere along the way he had heard another harmonica wizard on the radio named Lonnie Glosson. Wayne met Lonnie somehow and they became musical partners on and off for the rest of their careers.
Likely in the late 40`s, Wayne also became aquainted with the Delmore Brothers and recorded with them many times on hits such as Blues Stay Away from me. They practically invented country boogie woogie music. Wayne & Lonnie Glosson even played twin harmonica on some of the Delmore sides in sort of a call & response style, that style being one of them would play a certain phrase on their harp and the other would sort of answer with part of the phrase the first player played. This Delmore music was recorded on the King label. Wayne also made several solo records himself, his biggest hit likely being Why Don`t You Haul Off And Love Me.
Another angle to Wayne`s music career was live radio. He had several shows through the years (sometimes with Lonnie Glosson). He also made program transcriptions that he sold to other radio stations around the country. My dad remembers listening to Wayne in the 50`s at night from some station somewhere in Arkansas.
Mabey one of the most fascinating facts of Wayne`s career is that on all his radio shows he sold his "talking" harmonicas (the term talking harmonica coming from some novelty songs where the harp "talked" like a child, saying stuff like "I want my mama" & "I want a drink of water") by mail order. I`d say Wayne likely made more money from the harmonica sales buissness than any other angle of his music career. I heard several stories where he had sold OVER 1,000,000 HARMONICAS over the radio!! I have even saw a story that said he had sold as many as 5,000,000 harps!!!!
Wayne had some pretty good hits around 1950, but never became a star of the size of Acuff, Tubb or Snow, but was certainly well known on the radio. He was sort of what I call a 2nd tier country star of the likes of Carl Butler, Wilma Lee & Stoney Cooper, Cowboy Copas or Hawkshaw Hawkins. Certainly a well known star, but not a super-star.
This LP was recorded in December of 1963. Starday had many great album covers, this one is among my favorite. I`d like to know where they got their ideas for their covers!!
Enjoy Wayne Raney!!

Track Listing---
Mail Order Heart
The Roosters Are Crowing
Strictly Nothing
Walking With The Blues Tonight
The Fox Chase
Love Thief
Pathway Of Parting
Don`t Try To Be What You Ain`t
Cold Cold Snow
I Stumble, I Fumble, I Fall
Gone With The Wind
I`ve Got The Habit
Why Don`t You Haul Off And Love Me
Young Widow Brown