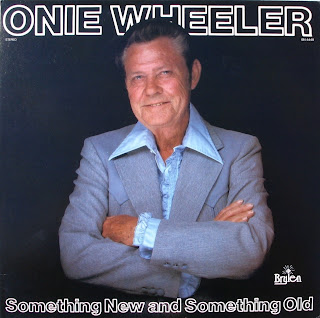 This has to be a mega-rare LP!! It was issued in 1982 and by that time Onie would have been a really obscure artist. By this time about all he was known for was playing the harmonica and making the train whistle effect for Roy Acuff on the Opry.
Onie (that`s a great name!!) was born in Senath, Missouri (south-east Missouri) on November 10th, 1921 and passed away at a late night gospel performance on the stage of the Grand Ole Opry May 26th, 1984.
Onie`s early recorded music (1953) was a new type of country music. It was some pretty hard rockin` stuff that we now would call rockabilly, or at least pre-rockabilly. Onie was also well known as an excellent harmonica player.
I`m not going to go into a whole lot of detail about Onie because there just isn`t all that much information on him. If you like this LP even a little bit I HIGHLY recommend buying a cd called Onie`s Bop on the Bear Family label. It`s a great cd featuring music he recorded in the 50`s for Columbia and Sun. There is also a 24 page booklet with the cd. The quality of the cd package is excellent, which the Bear Family label is well known for excellent sound restoration and really nice liner notes and such.
A few interesting facts I know about Onie is that he toured some with Elvis when he was first starting out. He also toured some with George Jones. Sometime in the late sixties Roy Acuff added Onie to his Smoky Mountain Boys. I never have heard the story about Roy hiring Onie. I wonder if Roy hired him more for his train whistle imitation than his harmonica player because Roy already had the best harp player in country music, Jimmie Riddle. Look on you tube for an Onie Wheeler clips, there is at least one of Onie doing one of his own songs with the Smoky Mountain Boys and some other clips of him playing harmonica for Roy. On the Roy Acuff song, Freight Train Blues, Onie and Jimmie Riddle play some pretty intense twin harmonica.
Onie wrote 4 of the songs on this LP---Onie`s Bop, I`d Rather Scratch With The Chickens, his best know number John`s Been Shuckin` My Corn and it`s "answer" song, Shuckin` My Way To The Hall Of Fame.
Well, I guess that`s about all I can say about Onie, he was a great singer with a rich baritone lead voice and great harp player. As I said, if you like this LP, buy the Onie`s Bop cd!!