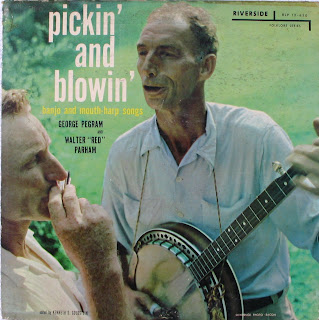 This is surely a pretty un-common LP. The Riverside label (what few records I have saw on this label) usually has pretty interesting stuff on them. From what I can tell, Riverside must have concentrated on old-time and folk type music. I`d like to see a discography of this label just to see what other rarely heard material there is to be found out there.
Now----a little about George Pegram (banjo) and Walter "Red" Parham (harmonica). I know very little about George Pegram other than to say I believe he was a discovery of the great folk & old-time music collector & performer, the great Bascom Lamar Lunsford (of which I`ll be posting some material of in the future). I know next to nothing about Walter "Red"Parham. I believe this LP was likely recorded in the early to mid 60`s, these men may still be living, I don`t know of it if they are though.
So---since I don`t really know anything about these fellows, I`ll just copy a little information off of the LP cover-----"George Pegram of Union Grove, North Carolina, and Walter Parham of Leicester, North Carolina, have been playing and singing together for many years. They appear together, and with other instrumentalists, performing for square dances all over western North Carolina, and are the annual stars of Bascom Lamar Lunsford`s Mountain Folk Music And Dance Festival held each year in Asheville, North Carolina, during the first week of August. When not performing, Pegram and Parham work as farm laborers and odd job men.
These recordings were made at Bascom Lamar Lunsford`s home in South Turkey Creek, Leicester, North Carolina. Pegram and Parham may also be heard on Riverside in Banjo Songs Of The Southern Mountains (RLP 12-610) and Southern Mountain Folk Songs And Ballads (RLP 12-617)."
The cover also says---"George Pegram uses a technique much like the well known "double-thumbing" style. It is a three-finger movement employing single notes; the melody is picked with the thumb and the drone is alternated between the first and second strings, using the index and middle fingers.
As companion to the banjo in this album, Walter "Red" Parham plays the harmonica, a traditional instrument whose music represents a blending of melodic elements from both Negro and white folk songs. In combination with the banjo, it brings to life many of the sounds familiarly heard in the farmyards and on the back porches of the peoples in the Southern Mountains."
So---there you know about all I know about these great old-time musicians. Listen & ENJOY!!