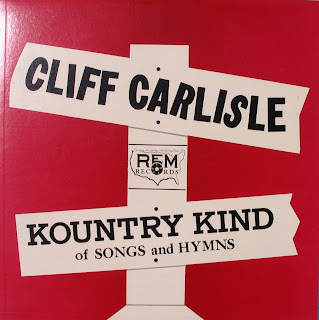 Hi everyone---this is, as far as I know, the last recordings made by the great Cliff Carlisle. The label of the LP is REM Records.
Cliff was from Taylorsville, Kentucky (May 6, 1903-April 5, 1983). He played steel guitar (in a heavily Hawaiian influenced style, Hawaiian music was hugely popular when Cliff would have been a teenager) sang and yodeled in the fashion of Jimmie Rodgers.
Jimmie Rodgers was also an influence on Cliff`s music. Cliff recorded may "white" blues type songs in the style of Jimmie Rodgers, and many featured a somewhat more complex yodeling style than Jimmie Rodgers had. Ciff knew Jimmie and even played steel for him on a few of Jimmie`s records.
In the late 20`s and through the 30`s Cliff recorded somewhere in the neighborhood of 200 sides, a fairly large number of records for the depression years. He started recording with a man he had performed with for some time named Wilbur Ball. Then sometime in the 30`s Cliff started playing with his brother Bill, who went on to be quite a well known artist in the 50`s as Jumpin` Bill Carlisle & The Carlisles and made himself a famous artist with mostly novelty songs. Many songs Cliff recorded during this time were "suggestive" type songs, songs that were almost dirty in a most fun fashion.
Around the time of World War 2 Cliff decided to retire from music, but about 1950 when his brother Bill was really becoming famous Cliff toured and recorded under Bill as mostly an instumentalist.
Cliff was a pretty dang good steel player, but apparently never made the switch to electric steel. He did play about every other type steel though. He would have started with the old Martin style Hawaiian guitars, then others like the National "biscuit bridge" single cone, a National Tri-Cone and even Dobro style resonator guitars. The Dobro made famous by Uncle Josh of Flatt & Scruggs had been bought by Josh from Cliff. I don`t know what type resonator guitar Cliff plays on this particular LP, but it`s likely a National Tri-Cone as I had read an interview of Cliff once late in his life where he said he was using a Tri-Cone at that time.
Now a little information on the LP---I have no idea when this was made, late 60`s I`d say, there`s no date on the LP cover. All the songs on this LP were written by Cliff. Hope you enjoy!!!

Track list---
Ramblin` Yodeler
Gamblin` Dan
Your Diary Told Me So
Red Velvet Slippers
Carolina Sweetheart
Ride `Em `Till I Die
Mine, All Mine
Shaggy Dog
Rocky Mountain Home
Shine, Shine On Me
Holy Lord
Home Of The Soul