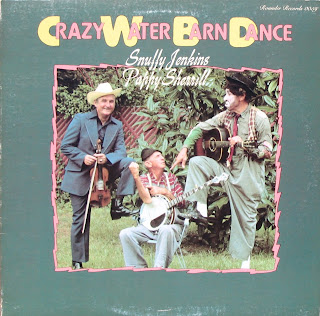 We have another fine LP for you here. Snuffy Jenkins, born in 1908, is pretty much credited with "almost" inventing bluegrass 3-finger style banjo. He was a great banjo picker (he could also play claw-hammer style pretty dang good, too), a fine old-time all-around entertainer in the old medicine show style by being sort of a clown and playing a pretty good washboard set-up. Sometime he would play 3-finger and claw-hammer style in the same song.
Homer "Pappy" Sherrill was a fine "pre-bluegrass" fiddler. I say pre-bluegrass meaning he sort of bridged the gap between old-time fiddlin` and bluegrass style.
Another artist of note on this lp is Julian "Greasy" Medlin. He was a fine guitar picker and medicine (or even minstrel) style entertainer, performing in make-up sort of in the black-face tradition, except he used white paint instead of black. He favored novelty and parody songs. Greasy and Snuffy teamed up as sort of a novety act and I`m sure was hilarious to see!!
There music is sort of "pre-bluegrass". They were almost too hot on their instruments to be called old-time, but were mabey just a little shy of the "slickness" to be called bluegrass. They had been big radio stars starting in the 30`s playing the different stations as was common then. The were often sponsered by Crazy Water Crystals (if you want to know about Crazy Water Crystals just do a Google search, I`m not going into the colorful history of that on here!!) and were sent by them to play all over the eastern part of the country to play for that sponsor. The also recorded some in the late 30`s with different line-ups and different artists.