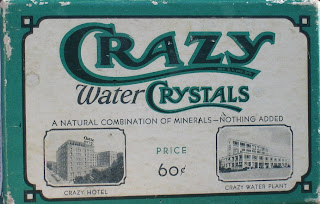 Hello folks-----here we are with some neat radio shows of The Crazy Hillbillies. Now I can`t really tell you any information as to who these people actually are on these shows or when they were made. I do know that the Crazy Water Crystal company was a "patent medicine" type product made from evaporating water from a well or spring in Mineral Wells, Texas. The water was heavily laden with natural minerals that would be left over after they evaporated the water, then packaged and sold in some stores, but mostly by mail order. The "crystals" had mostly a laxative effect. If you want to know more just do an internet search for Crazy Water Crystals, you will be able to learn plenty about them on the internet I believe.
I`m pretty sure these shows would have been made in the 1935-40 period. Crazy Water Crystals hired mostly country & hillbillie groups to play on radio stations (and they also made transcriptions of the shows to play in other areas of the country) to advertise their product, which was then to be mostly mail ordered from them. People today don`t realize the power radio had before tv came out as an advertising medium. Anyhow---some of the advertisements for the crystals would tell you about the product in sort of semi-vague descriptions, then tell you where to send payment for orders to. Usually the advertisements would request you to write what radio station you heard about their product from so they could determine where best to spent their advertiseing money.
Now about the recordings---I don`t know who the musicians are, but some of the more popular artists Cray Water Crystals used were Snuffy Jenkins, Wade & J.E. Mainer. I think the artists here are likely some combination of these artista, as Snuffy Jenkins, Wade Mainer & J.E. Mainer all had their own groupas that worked for the company, and for awhile there was different combinations of these three artists that worked together even. J.E. & Wade Mainer started out together as J.E. Mainer`s Mountaineers. Then Wade Mainer went out on his own as Wade Mainer & The Sons Of The Mountaineers. After Wade & J.E. Split, J.E. & Snuffy Jenkins played together for a while and I believe they used The Crazy Hillbillies as their name. I think there`s a good chance this is the Snuffy Jenkins, J.E. Mainer group.
One more interesting little fact is that Crazy Water Crystals required most outfits playing for them to use the word "crazy" in their band name, hence The "Crazy" Hillbillies. Any mid to late 30`s group you hear of usinh the word "crazy" in the name of their group was likely working for Crazy Water Crystals at the time--------Happy listening!!