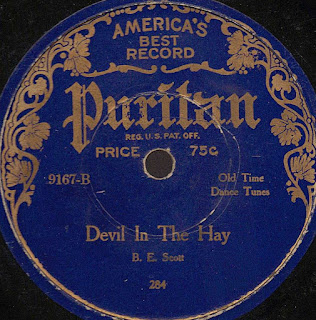 I know nothing at all about B.E. Scott. I`m just guessing by his fiddle style and his voice that he was an older gentleman an I`d random a guess he was likely born before 1870. Berinda Scott is the piano pickers name, she could be his wife or a daughter.  Both tunes are old standards, although I think Devil In The Hay may be more of a New England style tune and I would think by listening to his style he may well have been from New England, at least to my ears. The most fun thing about the record to me is his dance calls on The Wagoner. His voice sounds like an old drill seargent who has blown his voice out screaming at green privates. This is a pretty rare record, the sides were recorded for Paramount and issued on Paramount and Silvertone as well as this Puritan coupling. Puritan was a private firm that made it`s own phonograph line, and I doubt they recorded their own material, as all the puritan discs I`ve saw were sided leased from other labels. Enjoy!