Here`s a post of a group that was pretty popular on WSM`s Grand Ole Opry and WLS`s Barn Dance in the 1920`s. They also recorded many records in the 1920`s. Sometime in the late 1930`s of in the 1940`s they went west to California and I think they had a radio show. Then they did have a very early TV show, likely about the first country music show on any TV station. They were active up into the late 1950`s at least. They recorded an LP which I posted here a few years back. Apparantly they made a few other sporadic recordings in the early to mid 1950`s , as evidenced by my post here today. 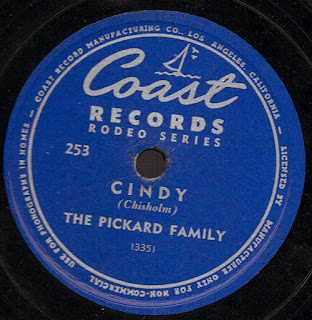 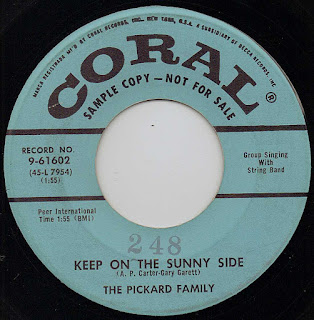 I don`t know anything about this session either, I`d just guess mid 1950`s. I`d say this is the only 45 issued by The Pickard Family. Tunes are Keep On The Sunny Side and Tell Me Who. Tell Me Who turns out to be a pretty interesting version of the song Who`s Gonna Shoe Your Pretty Little Foot, sometimes called Green Valley Waltz.