Here is an oddity that I found. It`s a 45 recorded by Sam & Annie, which I have no idea who is. I bought it because the late, great harmonica player, Lonnie Glosson, is on it. Apparantly from the story on the record sleeve, they played at Jimmy Carter`s arrival in Washington, D.C. after he won election. Years ago it was common for candidates to employ hillbilly entertainment on the campaign trail, mostly in the south. I`d say this would have been about the last of this type entertainment at a political function on this level by a lesser-known type country artist. Nowadays, only a super-star would be hired for such an event. I actually have played at a political rally myself, on the county level for a distant cousin of mine.
At any rate, give this a listen for at least the harmonica by Lonnie Glosson.
Track titles are---
1. Honey-Dew Love
2. Jimmy Carter Special 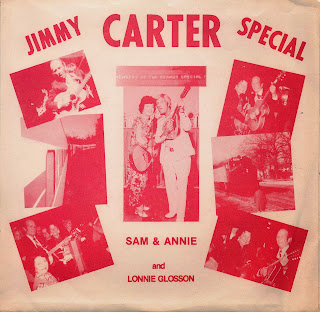