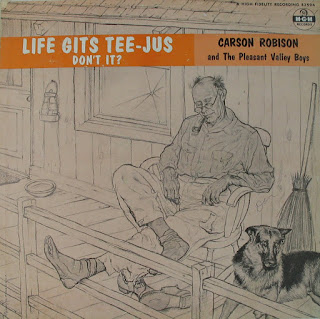 Here`s a pretty neat LP. Carson Robison was a country recording artist from the beginning of the recorded country music industry and was on hundreds, if not thousands of old 78`s. He started as sort of a studio artist playing guitar and singimg harmony for Vernon Dalhart, then he started recording solo and with other artists also. He also wrote many songs. His specialty in the 1920`s was disaster and topical songs.
I`m not sure, but I think the recordings on the LP were the last recordings he made, and most if not all of them were issued on 78`s and 45`s. I`m pretty sure all the material here is likely written by him. So we have some comedy songs, some cowboy material, some skit type tracks and some topical songs that borderline on propaganda. He wrote many anti-Hitler and anti-enemy songs during World War 2 and some anti-Communist items after the war, one of which can be heard here. Happy downloading! 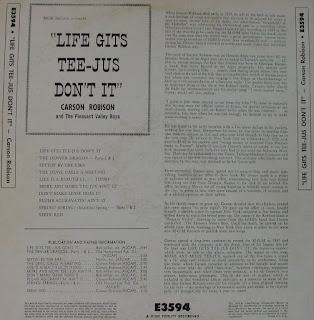