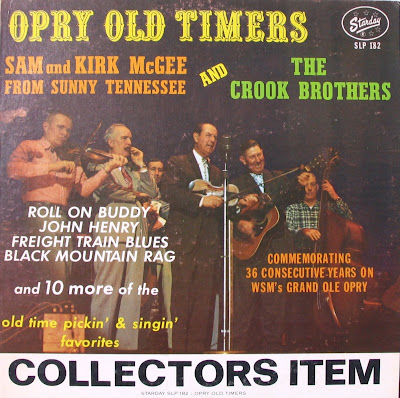 A Very aptly named album. The Crook Brothers and Sam & Kirk McGee had been on the Grand Ole Opry from it`s birth pretty much (at least within about 6 months of it`s birth) till each one of them passed away. Sam McGee passed away in 1975 (on the Opry 50 years) and Kirk in 1983 (on the Opry 58 years). Herman Crook passed away in 1988 at age 89 and was still performing, very well at that (on the Opry 63 years, a record I believe).
On thing that made the Crook Brothers unique was that they were led by Herman`s harmonica as lead instrument, not the fiddle. The Crook Brothers were originally Herman and his brother Matthew playing twin harmonicas. Sometime around 1929, Matthew quit to become a policeman, leaving Herman as the groups star. From that time on the group featured twin harmonica and fiddle as the lead instruments, still pretty unique. Also, Herman added another member to the group on banjo, Lewis Crook. As unusual as Crook is for a last name, Herman and Lewis were not related. Herman and Lewis were both in the band till Herman passed away in 1988. Here`s a little known piece of Opry trivia---in the early days of the Opry, the Crook Brothers occasionally featured a vocal tune. Lewis Crook was the first person to sing Will The Circle Be Unbroken on the Opry. This song has became somewhat of an anthem for country music.
The McGee Brothers, Sam & Kirk, were pretty popular stars in their time. Discovered by none other than Uncle Dave Macon, they teamed up with Macon and got started in their musical careers that way. Sam was a virtuoso finger-picker on the guitar in the old country-parlor style and was also very blues influenced. He also played 5-string banjo and banjo-guitar. Kirk was a really good 5-string picker, both in clawhammer style and 2 finger style. He was also a good 2 finger guitar player. He also played fiddle some. Sam`s vocals leaned toward comic and novelty songs while Kirk leaned towards sentimental type tunes. They were popular Opry performers all through the years.
The songs on this record are all good`uns. All the Crook Brothers tunes are songs you would expect to hear a Tennessee string band play. The McGee`s tunes are a little more varied. ALL are great tunes, both for the songs and the musicianship.
In the download I have included a song not on the LP. The tune is Lost Indian by the Crook Brothers. It was recorded at the session but not released on the record. It was released on one of the many Starday various artist LP`s. I wonder how many tunes was recorded by each group that wasn`t released. Sam & Kirk made many records through the years, but Herman Crook was reluctant to make records for some reason. I heard that this sold well enough that Herman was approached again to record and just wouldn`t, too bad for us.
Hope you enjoy this one! 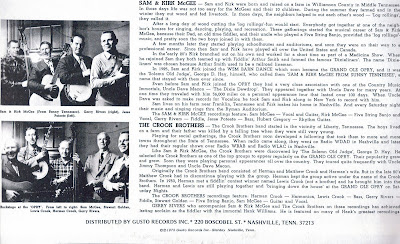