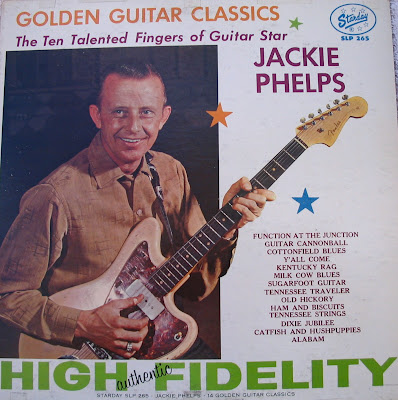 Here`s a good, country electric guitar record. Jackie got started as a professional musician in the late 40`s by my estimation. He could play about anything. I have heard recordings with him on 5-string banjo playing "sort of bluegrass" with what I believe to be 2 finger picking. He was also a good lap steel picker. I think I have saw a film clip of him playing lap steel with Lonzo & Oscar before. Probably the best place to look for Jackie early in his career is in the old Gannaway Country Show films from about 1952 -1955-ish where he plays electric lead guitar in some episodes on a pretty strangely shaped guitar. He wasn`t the very best electric guitarist, but in the 50`s was likely in the top 10 in country music. He also done studio session musician work in the 50`s and 60`s, so there`s no telling how many times we may have heard him and didn`t know it was him. He played in Roy Acuff`s Smoky Mountain Boys for most of the 60`s, possibly starting in the late 50`s.
What Jackie is most famous for though was his career on Hee Haw. He temed up with Jimmie Riddle to do the Eeephin` & Hambone act. Hambone is a technique of slapping various body parts with your hand (or hands) to make "music", mostly a rhythm technique. Jackie was the Hambone part of the act. There is some videos on You Tube of them from Hee Haw doing their act.
Enjoy this one! 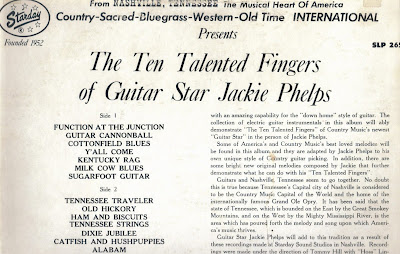