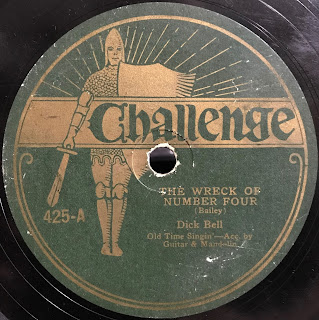 Green Bailey (as Dick Bell) / Challenge 425
The Wreck Of Number Four / Shut Up In Coal Creek Mine
recorded August 29, 1929 in Richmond, Indiana 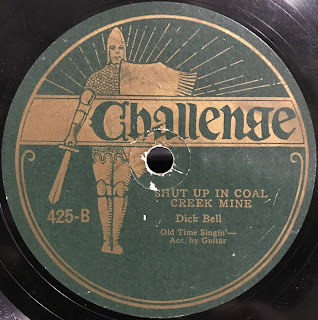 The Wreck Of Number Four is sort of a typical disaster song with a moral in the last verse that was so common in the late 1920`s on country records. I don`t know but I`d guess the song is based on a real event, as most of these types of songs were. The best side, at least to me, is Shut Up In Coal Creek Mine. There are several songs about the Coal Creek Mine and it shouldn`t be too hard to find information online about the mine and the songs if you are interested. I know nothing about Green Bailey except to say he recorded seven sides. He is accompanied by Asa Martin and Doc Roberts which recorded many sides over the years.
The condition of this disc is pretty rough so the sound is pretty noisy, but I have tried to clean up the sound the best I could and it`s plenty listenable. The poor quality of shellac in most Challenge label records contributes to noise also. Happy listening!