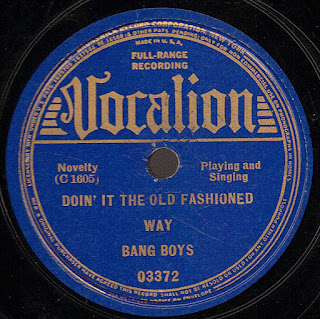 Bang Boys / Vocalion 03372
When Lulu`s Gone / Doin` It The Old Fashioned Way
recorded October 23, 1936 in Chicago, Illinois
Here`s a pretty rare find! We have Roy Acuff and the Crazy Tennesseeans under a pseudonym as Bang Boys. The songs on this are pretty racy, especially When Lulu`s Gone. I`ve heard Roy Acuff mention a record he made early in his career he didn`t even want his name on, this is it.  He wouldn`t even talk about the record, he had cultivated a clean image through the decades of his career and didn`t really want to be connected to this. It`s a great disc with some fine music by the band. It`s a fun listen for sure. Happy listening!